Read A Shiver of Wonder Online

A Shiver of Wonder 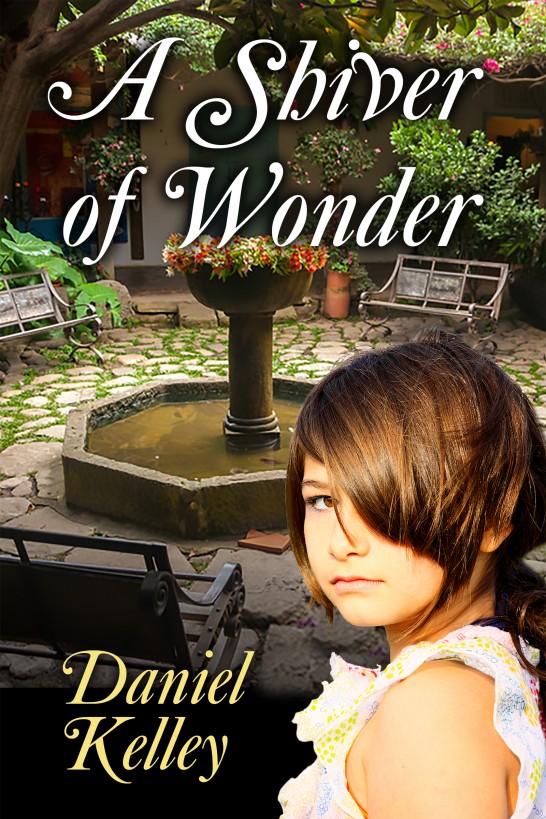 A Shiver of Wonder

This is a work of fiction.  Names,
characters, incidents and places are either products of the
author’s imagination or are used fictitiously.  Any
resemblance to actual events or persons, living or dead, is
entirely coincidental.

All rights reserved.  This book may not
be reproduced or transmitted in any form, in whole or in part,
without permission in writing from Daniel Kelley.

Daniel Kelley is an author and a music
arranger.  His novel, Jack and Tilly, the sequel to his short
story A Dance with Tilly, was published in November 2015.
Nearly 675,000 books of Daniel’s compositions and
arrangements have sold worldwide, and over 30,000 of his e-books
have captivated readers.  With lyricist JoEllen Doering, he
also composed the music to the classic holiday song, “It's
Christmas Time Again”.

Daniel mosaics, bakes constantly,
annoys practically everyone with puns, is a massive EDM fan, and
loves playing games of almost any kind, though Hearts is his
current fave.  He and his wife Cynthia have three children and
too many fish.  Adair, Darcy and Adele are the names of the
children.

Thank you for downloading this ebook. This
book remains the copyrighted property of the author, and may not be
redistributed to others for commercial or non-commercial purposes.
If you enjoyed this book, please encourage your friends to download
their own copy from their favorite authorized retailer. Thank you
for your support.

for Mary Rorro, who deserves so
much more

The day that David Wilcott met himself was a
Tuesday. A drizzly Tuesday in mid-May, to be specific. He was both
31 and 58 at the time, and both of his selves had been aware of
this meeting beforehand, although obviously the elder David had
enjoyed some decades of anticipation as opposed to days.

The 31-year-old David was only weeks away
from moving out of the Rainbow Arms, a once upscale apartment
complex that had been his home and refuge for almost two years. The
58-year-old David had spent years trying to forget the Rainbow Arms
and nearly everything associated with its comfortable yet
dilapidated trappings. He hadn’t found this an easy task, at any
age.

Johnson. The image of Johnson was the first
thing to arise in David’s thoughts whenever the Rainbow Arms came
to mind. That cherished, loyal, frolicsome chocolate Labrador who
loved nothing more than to just accompany him about the streets of
Shady Grove, or to chase moths, butterflies, or the occasional bee
around the small private courtyard that ran along one side of the
property. Johnson was David’s friend, his only companion when the
two first moved to Shady Grove, his solace, his sole connection to
a past best left behind.

The Rainbow Arms was situated on Piston
Avenue, an east-west thoroughfare approximately a mile and
three-quarters south of the downtown district. It was one of
several avenues named decades before after the five most prominent
men in the town, who in an odd coincidence had also comprised the
town council at the time. In an ebullient spurt of growth, Shady
Grove had pushed south, flourishing and spreading. Easton,
Smithfield, Marion, and Piston Avenues had been anointed, along
with the dubiously coined Dr. Longworth Avenue. The town couldn’t
have expanded farther north; a series of foothills began to rise
just above downtown, and the best views had long ago been
commandeered by the elite. Widening to the east or west would have
cut too deeply into the farmland of William Marion or Philip
Piston. But south had been Smithfield territory, and as the town’s
primary industrialist he had been more than eager to build and
sell.

Shady Grove, however, had contracted over
time, both in population and in usefulness to the world at large,
allowing its outskirts to become dry and desiccated, unclean and a
touch unsavory. Piston Avenue was one block north of Easton, the
southernmost avenue in the town, but the creeping malaise of
dereliction had begun to cast its shadow there as well.

For David, though, the Rainbow Arms was
ideal. While there was little about the building or its grounds
that resembled or even so much as inspired the thought of a
rainbow, it was quiet, pleasantly nondescript, and both far enough
away and close enough to downtown for comfort. David didn’t own a
car, so if he needed to be somewhere faster than he and Johnson
could walk, the Third Street trolley was an easy two and a half
blocks away, and it made the trip to the center of downtown in less
than ten minutes.

The courtyard, with its stone fountain,
wooden benches, and drowsy rosebushes, was David’s favorite place
to sit and read, or to sit and think while Johnson alternated
between lying quietly and amusing himself with attempts to catch an
insect. The apartment building itself was indistinguishable from
many of its neighbors: two floors, seven units over seven, with a
dated lobby and a strip of grass fronting a border of geraniums and
ferns to cover the bald spots where the stucco had chipped away.
But how many other complexes in Shady Grove could boast a quiet,
walled-in garden, and to the side of the building as well?
None!

A dim passageway between units 1E and 1F led
to a brief wooden gate. And opening that gate, even after nearly
two years of doing so, still brought a pleasurable thrill to David.
To the left when one entered was the burbling fountain, four
time-cured oak benches, and a confused welter of flowering plants
and shrubs. To the right, a wooden fence separated the courtyard
from another feature unique to the Rainbow Arms: a caretaker’s
cottage, where a man named Bill Lopes had lived and worked for over
forty years.

Bill had been the one to show David the
apartment available to rent, 1F. And David had known that he was
going to live at the Rainbow Arms within seconds of making Bill’s
acquaintance, just outside the tiny lobby.

“Not a chance in hell,” had been Bill’s
opening gambit, mumbled really since he hadn’t bothered to remove
the unlit cigar he’d been chewing from his mouth.

David, who had carefully parked a bright
yellow Porsche at the curb before letting Johnson out and ambling
toward the man who was wiping down the blades of an old push mower,
couldn’t help but blink. “Excuse me?”

Bill had jerked his head toward the shiny
car. “If you’re Wilcott, and who the hell else could you be at
eleven in the a.m. with a dog on a Goddamn Wednesday, you ain’t
gonna live here, not for shit sure, if
that’s
your
ride.”

David had taken one glance back at his car
and then burst into laughter. And as Bill put down the lawnmower
and began to rise, David had answered, “That won’t be my ride as of
Saturday, and I sure as shit
am
going to live here. That is,
as long as Johnson agrees.”

“Well, blow me sideways,” Bill had replied.
“If that’s the case, I just sure as hell started us off on the
wrong footwise, no?”

David had stuck out a hand, ignoring the
smeary mess on Bill’s. “David Wilcott.”

The lease for a small one-bedroom apartment
had been signed, Johnson had chased and failed to catch his first
bee in the garden courtyard, the Porsche had made three more trips
to the Rainbow Arms before disappearing from Shady Grove
forever.

But David had found a home.

While David had enjoyed some odd, even
hysterical, moments along his journey, the strangeness in his life
truly began with the girl. Clair. No e at the end of
this
child’s name. An e would have added clarity to her written
sobriquet, a girlishness to her as-yet undeveloped femininity. It
wouldn’t have changed anything that happened, anything that she
was, most likely, but it should have been a clue that something was
a touch off-kilter with her, if not massively out of whack.

Mrs. Rushen was the woman who took care of
her. She
might
have been the girl’s mother… but probably
not, as no one had ever seen so much as a document with the words
‘Clair Rushen’ printed on it. Patricia was Mrs. Rushen’s first
name, but nobody called her that. Unapproachable to an extreme, she
was one of those women cursed with a bland, ageless face, and a
dumpy body that could have belonged to a 23-year-old or a
73-year-old.

No one had ever heard Clair call her by any
name.

David had met Clair in the courtyard.
Perusing the Shady Grove Courier late one Sunday afternoon, he’d
been stunned to discover a girl standing just a few feet away.
Johnson, snoozing, had sounded no alarm, and David hadn’t heard the
wooden gate either open or click shut.

“Hello,” he’d said curiously, folding the
newspaper onto his lap.

“Hi,” had been her simple response. Johnson
lifted his head and opened his eyes, but made no move toward
her.

“Not yet. But tonight I will,” she
answered.

David studied her: a stilted answer from a
queer little girl who had seemingly appeared out of nowhere. With
neat dark hair hanging straight to her shoulders, a lilac sweater
buttoned over a floral print dress, and a pair of saddle shoes on
her feet, she could have stepped straight out of a 1950s
photograph. Her eyes were dark as well, frank and unwavering as she
gazed back at him.

Johnson still hadn’t risen, a peculiarity
David’s subconscious was processing. Normally he’d be all over a
newcomer, sniffing and circling, tail wagging as he assayed a
potential playmate.

Clair hadn’t moved either.
Who wears
saddle shoes these days?
David wondered as he gathered his
newspaper and set it beside him on the bench.

“How old are you?” he asked aloud.

“How old do you think I am?” she rejoined
with the merest whisper of a smile.

And again, David found himself scrutinizing
her. She had a six-year-old’s height and frame, but those clothes,
and the direct manner in which she spoke… “Are you seven? Eight?”
he asked.

Her smile grew. “I’m in first grade,” she
said. But that was all she offered. And then the garden was quiet
except for the trickle of water in the fountain, and the singsong
of a pair of birds concealed in one of the bushes.

“First grade,” David repeated, slowly
nodding his head as though her few words had opened up a world of
hidden meaning to him. And he would have stupidly repeated this
again if his trance hadn’t been broken by a click of the latch as
the gate was pushed open.

“Clair.” A woman stepped into the garden,
shapeless in a drab, ankle-length skirt and a limp top. Johnson had
stood up, but once again didn’t approach the stranger. “Clair, I
asked you to wait for me in the courtyard.”

Clair hadn’t turned. Her eyes were still
locked on David’s as she answered, “I
am
waiting. And I am
waiting for you in the courtyard. Aren’t I, David?”

Deadly Identity by Lindsay McKenna
All I Want by Natalie Ann
Embers by Helen Kirkman
JACE (Lane Brothers Book 3) by Kristina Weaver
Annie by Thomas Meehan
The Art of Detection by Laurie R. King
siobhan vivian - not that kind of girl by Siobhan Vivian
Make Me Lose Control by Christie Ridgway
Queen of His Heart by Marie Medina
While My Pretty One Sleeps by Mary Higgins Clark