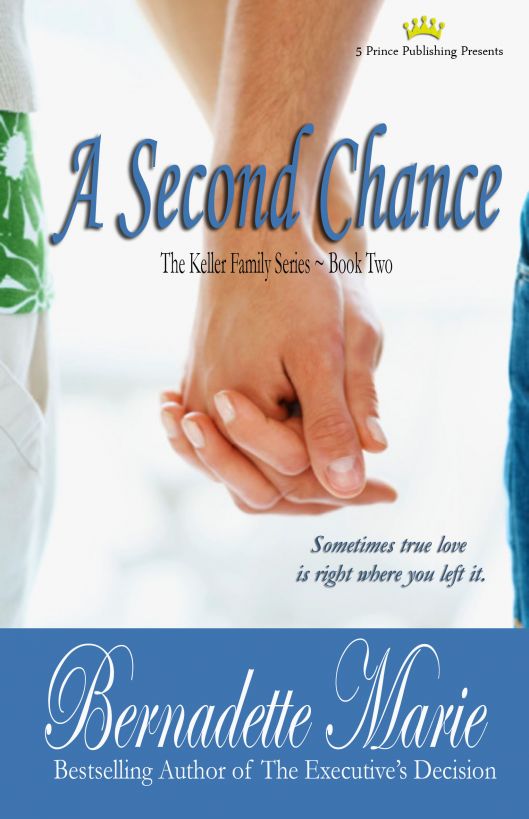 Other great books from Bernadette
Marie

Also look for these titles

Cart Before the Horse
Candy Kisses

This is a fictional work. The names,
characters, incidents,

places, and locations are solely the
concepts and products of

the author’s imagination or are used to
create a fictitious

story and should not be construed as
real.

All rights reserved. No part of this book
may be used or reproduced in any manner whatsoever without written
permission, except in the case of brief quotations, reviews, and
articles. For any other permission please contact 5 Prince

If you purchased this book without a cover,
you should be

aware that this book is stolen property. It
was reported as

“
unsold and destroyed” to
the publisher, and neither the author

nor the publisher has received any payment
for this

For loving me and each and every
little flaw.

For all
my
men who stand behind
everything I do. I thank you. I am honored to have you in my life.
To Mom, Dad, and Anni, without you I’d have no foundation in which
to build lovable families. Susan, having you as my friend, even
when you are marking up my work, brings me such joy.

For Connie, who was very
candid in sharing her battle with plasma cancer, and who always
kept her spirits high and encourages me daily. You have been an
asset in my personal (and professional) life.

For my Aunt Bev, who will
forever amaze me with her kind heart, soft words, gentle ways, and
ability to comfort others, even as she faced her own challenges.
May I walk as gracefully as you do some day.

For Melissa. Our time
together on this planet was very short. But the memory of you is
forever imbedded in my heart. No child should ever have to go
through what you went through, but because of you I cherish every
moment I have with my own children. And to Teri, her mother, you
cross my mind almost daily now that I am a parent. I see your
strength now that I have endured so many things with my sons. Your
strong spirit, and the memory of your husband and daughter, stays
with me and I cherish the time we were neighbors and
friends.

For Lisa. I will forever
laugh that I thought you shaved your head because you had a bad
haircut. I never would have assumed that breast cancer would
forever shadow your life. Thank you for being there for me when I
needed you. Thank you for the food, companionship, and friendship.
Thank you for watching my kids and cleaning my house, when really
you probably didn’t feel good at all. Years later, thank you for
intimately sharing your story with me so that Madeline could become
more realistic. And above all else, thank you for being my
friend.

I often wonder if my editor is tired
of hearing me tell her that this is my very favorite book. The love
story between Carlos and Madeline has captured my heart for years
and I’m thrilled to share it with you now.

We met this wonderful couple in THE
EXECUTIVE’S DECISION. Now, as Carlos finally moves on to a new life
with a new woman, Madeline finds that everything in her life is
falling apart, and that very life is threatened by breast
cancer.

This book encompasses the couples’
tight bond with the Keller family and their own children, Eduardo,
Christian, and Clara. As an author is has been fun to “watch” the
kids grow and begin planning their lives for them. (Did I just drop
a hint of things to come?)

I hope you enjoy the love story of
Carlos and Madeline as much as I enjoyed writing it. And I’ll look
for you again when Curtis Keller finds true love in OPPOSITE
ATTRACTION.

At the end of the long, tree-lined
drive stood the house, welcoming her just as the owner would. It
wasn’t the first time Madeline Carson had made the trip out to
Regan and Zach Benson’s house, but she couldn’t help but wonder if
it would be the last.

She batted back the tears that stung
her eyes. No, she wasn’t going to cry for herself. She was there to
celebrate the birth of Regan’s baby boy. Tyler Alan Benson. A child
welcomed into the world by two people who were so very much in
love.

Oh, she was adult enough to admit she
was jealous. Who wouldn’t be? Zach doted on his wife of three
years. A baby would only enhance the perfect relationship that her
ex-sister-in-law had with her husband.

There had been a time when she’d felt
that optimism about a man, love, and her family.

It had been five years since she and
Carlos Keller, Regan’s brother, had divorced. Five years, and she
still mourned it every day. After her marriage to Carlos ended,
there was his best friend, Matt. He’d been there to console her in
her time of need. That need had led to a relationship, and they’d
married only six months after her divorce had been finalized. The
marriage had ended the twenty-year friendship between Matt and
Carlos, but who could blame them? Neither Carlos nor Madeline could
really pinpoint what went wrong to end their marriage. It simply
had fallen apart. There were money issues, of course. Then the kids
came along, and the money was even tighter as Carlos finished
graduate school and she worked two jobs. The very things that were
to have made their family stronger had actually pulled it
apart.

Matt hadn’t meant any harm when he had
come to console her. He was playing the part of a friend to each of
them. Things simply had changed between them, and they’d fallen in
love. Or so she’d thought at the time.

Madeline pulled to the side of the
driveway and wiped at her eyes.

No, it hadn’t been love. It had been
comfort. Matt needed to take care of someone, and she was willing
to let him take care of her. He’d let her stay home and raise her
children. She couldn’t have asked for more.

Now even that had fallen
apart.

Madeline glanced at the messenger bag
on the passenger seat. Inside it were the divorce papers that Matt
had served her with three days ago. So far, she hadn’t had the
courage to sign them. She hadn’t even had the courage to discuss it
with her children. They would get to that. As soon as Carlos
brought them back to her after his week with them, they’d realize
Matt had moved out. She’d like to think they’d be a little upset
that he was gone, but she knew they wouldn’t.

Oh, it would hurt for the moment. It
would hurt more because they’d know it hurt her, but they were too
in love with their father to want another man in their life or
hers.

Sure, Matt had been a good role model
and a loving man to them all. He simply wasn’t their father. For
the first time in days, she smiled through her tears. Her children
loved their father and he loved them.

She took a few cleansing breaths.
Matt’s leaving couldn’t have come at a worse time. Having your
husband walk out on you never happened at a convenient time, but
she had a bigger battle to face now.

Madeline put her hand to her chest and
looked down at the swells of her breasts against her shirt. She had
cancer and she hadn’t told a soul. Sadness filled her body with a
heavy fullness, and anger riddled her mind. Madeline had never
imagined this would happen to her.

“
Well, now isn’t the time to
sob over your sad life,” she said to herself as she pulled down the
visor and looked in the mirror. She wiped off the smudged mascara
and fixed her hair. “This is Regan’s moment. It’s time to celebrate
life.”

Once she successfully pulled herself
together, she started toward the house.

The chairs on the porch rocked in the
breeze. The November air had chilled, but the ground was still dry.
That would be changing soon, she thought as she parked the
car.

Madeline looked at the house. It had
been Zach’s engagement present to Regan. Or, as Regan referred to
it, her bribe to marry him, which had worked in his favor. Over the
past three years, Regan had added her touches. In the spring, the
flowers would all bloom around the porch and lay out a colorful
spread of welcome. As it was, the drive was paved with leaves that
had finally given up their homes on the bare branches of the trees
that lined the road.

She climbed from the car and opened
the trunk. The large box she’d brought for Regan and Zach sat
wrapped in bright yellow paper, reminding her that a new life was
just beyond those doors. A cousin to her children, a nephew to her
ex-husband, and a blessing to Regan and Zach.

She lifted the box from the trunk and
moved it to her hip. Then she shut the trunk, walked up the front
steps, and pushed the doorbell. When she heard it chime just beyond
the door, she realized that she’d probably woken the
baby.

Regan pulled open the door and smiled.
“Madeline. I’m so glad you were able to come by. Please, come in.”
She stood back to let her through.

“
You look wonderful,” she
said, but she saw the signs of motherhood streaked across poor
Regan’s face. Her eyes were hollow and dark from lack of sleep. The
elegant attire worn by the wife of one of Tennessee’s most
prominent businessmen had been swapped for a pair of comfy sweat
pants and an oversized T-shirt to encompass her swollen breasts.
“This is for you and Tyler.” She handed the box to
Regan.

“
It’s a box of necessities.
Diapers. Diaper-rash cream. Nipple cream for the mama.”

“
Just a few other things I
think you can use up. I didn’t buy him any clothes. I figured
Zach’s mother would want to do most of that.”

“
You’re right. Audrey will
make sure he’s the best-dressed child at the playground. I think
she cleaned out the Baby Gap.” She shook her head. “Zach tells her
to quit buying him things, he’s only a week old, but she
insists.”

“
I’d have to agree.
Grandmothers get special rights.”

Regan laced her arm through Madeline’s
and escorted her to the living room. Madeline smiled when she saw
the bassinet near the sofa with the sleeping baby. Her heart ached
a bit with the memory of all of her own children sleeping in it.
“Your mother gave you the bassinet?”

“
Yes, she wants everyone to
have a chance to sleep in it. Carlos and Arianna were the only two
of her own children that didn’t get to.”

The Keller family was an eclectic mix,
Madeline thought. Regan and Arianna had been adopted by the Kellers
when Regan was only an infant and Arianna was two years old. Their
little brother, Curtis, was the Kellers’ only natural-born child,
and he was a year younger than Regan. Carlos had been adopted by
Emily and Alan Keller when he was seven, after a car accident had
killed his parents.

The Unexpected Coincidence by Amelia Price
A Dust Bowl Tale of Bonnie and Clyde by James Lee Burke
Hitler Made Me a Jew by Nadia Gould
Mad About the Duke by Elizabeth Boyle
A Tailor-Made Bride by Karen Witemeyer
Maggie MacKeever by Strange Bedfellows
Tattoo My Heart (Heroes of Seaside Point, Book 1) by Dymond, Mia
The Patrimony by Adams, Robert
The Fiddler by Beverly Lewis
Gypsy by J. Robert Janes