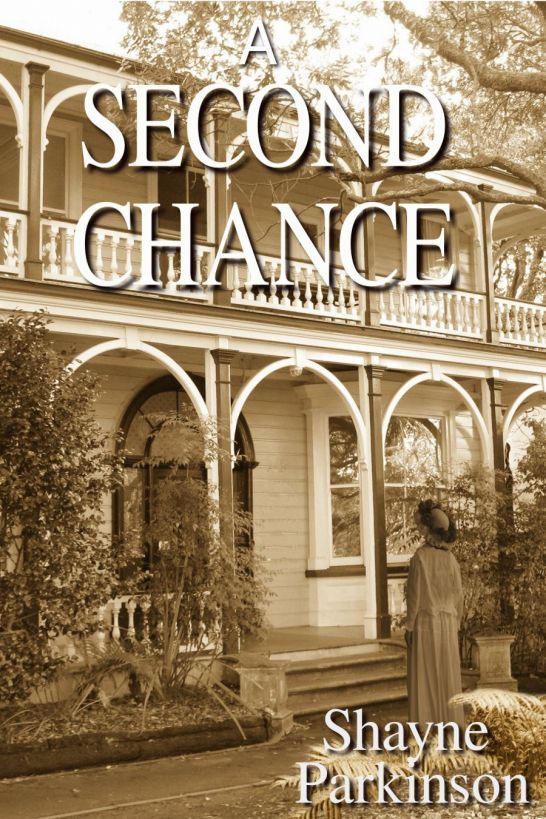 This ebook is licensed for your personal enjoyment
only. This ebook may not be re-sold or given away to other people.
If you would like to share this book with another person, please
purchase an additional copy for each person you share it with. If
you’re reading this book and did not purchase it, or it was not
purchased for your use only, then you should return to
Smashwords.com and purchase your own copy. Thank you for respecting
the work of this author.

This is a sequel to the
three-volume work
Promises to
Keep.

Other titles by Shayne Parkinson at Smashwords:

Family trees and some extra background to the book’s
setting may be found at:

The clear autumn sunlight lent a hint of
gold to the rich green of the grass. Flowers glowed where the light
caught them: daisies growing wild in the grass, neat posies in
earthenware pots, and a whole basketful of blooms carried by a
slight figure dressed all in black.

She carried the basket over one arm, her
other arm looped through that of the tall woman who walked at her
side. Her hat with its black veil barely reached her companion’s
shoulder, and a casual observer might have taken them for a woman
in charge of a young girl. But closer inspection would reveal fine
lines around the eyes of the black-clad woman, and a few threads of
silver in her dark hair; while her companion’s face was smooth and
unlined, and her hair glossy black wings under her white straw
hat.

They stopped in front of a small slab of
pale grey marble, the woman in black releasing her hold on the
other with a hesitation that spoke of how precious the contact was.
She crouched before the slab and placed a posy of pink roses in the
vase that stood there.

‘This is where Granny’s buried—your
great-grandmother,’ she said.

The younger woman crouched beside her, and
traced the words on the stone with her fingers. ‘Her name was Amy,
too. You were named after her.’

‘Yes, I was.’ Amy stroked the blue silk of
the younger woman’s skirt. ‘And I named you after Mama.’

She rose and went the few steps to where
another, larger, slab marked a double plot. ‘Come and see Mama and
Pa’s stone,’ she said, looking over her shoulder. The younger woman
joined her.

“Dearly Beloved Wife of Jack
Leith”.’ She fell silent for a moment. ‘She was beloved, too. I
don’t think Pa ever really got over losing her.’

‘So young,’ her companion murmured, studying
the stone. ‘Only twenty-seven.’

‘I can just remember her,’ Amy said. ‘She
was lovely—that’s why I gave you her name.’ She smiled wistfully.
‘It hides Mama’s name, having Sarah in front of it. I know they
wanted to give you a new name, but I can call you Sarah Ann when
it’s just us two, can’t I?’

‘Of course,’ said Sarah. ‘I’m not ashamed of
the name you gave me.’

Amy placed more of her roses before the
stone. ‘

“And of the above Jack
Leith”,’ she read. ‘See how new the writing looks compared to
Mama’s? It’s six years since Pa passed away, though. I wish you
could have met him.’

‘I doubt if we would have been friends,’
Sarah said, a tightness creeping into her voice.

‘I think you—’ A look at Sarah’s set
expression silenced Amy. ‘I hope you would have,’ she murmured.

‘I found one of these red roses this
morning,’ she went on more brightly. ‘Pa always liked these ones
best—Mama planted the bush, and I took a cutting from it. They
don’t usually have flowers this late, I was lucky to find one.’ She
held the rose out. ‘Would you put it on Pa’s grave for me?
Please?’

Sarah hesitated only a moment. ‘I think
not,’ she said crisply. ‘I can’t see that my attentions would make
my grandfather rest easier in his grave.’ She put a hand on Amy’s
arm. ‘Whenever I think of him, I can’t get past the knowledge that
he made you marry that dreadful man. That he made you give me
away.’

Amy shook her head. ‘It wasn’t like that. Pa
was only trying to do the right thing for me.’

‘If that’s the case, he had an odd way of
going about it.’

‘He did his best.’ Amy slipped the red rose
back into her basket and walked a short distance with Sarah, to a
small plot marked by a low white stone. ‘This was your baby
brother.’

‘ “
Alexander John
Stewart”,’ Sarah read aloud. ‘Such a little grave it
is.’

‘They told me he was tiny. He was born much
too early, and he only lived a few hours. I wasn’t allowed to see
him.’ Amy took a small spray of jasmine from her basket and placed
it in front of the stone. ‘I used to think I’d like to have some of
that iron that looks like a cradle around Alexander’s grave. They
do that with babies’ graves sometimes—there’s one over there, see?
Alexander never had a real cradle.’

‘Why didn’t you have his grave done like
that, then?’ Sarah asked.

Amy gave a small shrug. ‘Charlie didn’t seem
to think of it, and I didn’t like to ask. I suppose it would have
cost a lot of money.’

‘Oh, it doesn’t matter now, Sarah, not after
all this time.’

‘Yes, it does,’ Sarah said. ‘He was my baby
brother, after all. Half-brother, anyway. There’s no need to
discuss it, the thing’s settled.’

Amy squeezed her hand in silent gratitude,
and kept hold of the hand to lead Sarah over to a tall, imposing
monument. ‘There’s a wonderful stone for Mal, anyway. The whole
town put in money to have this put up. Mal was the only boy from
here that went to the war.’

‘He must have been well thought of,’ Sarah
remarked, studying the inscription.

‘He… people thought well of him after he
died, anyway. I suppose that’s how it usually goes. He wasn’t a bad
boy, not really.

‘I had them put Charlie as near Mal’s
memorial as I could.’ Amy shook her head as a rush of memories
crowded in on her. ‘It tore the heart out of him when Mal died, I
think.’

‘Are you sure he ever had one?’ Sarah said
acidly.

‘Oh, yes. Especially for Mal. Charlie was
never the same again after that.’ She gazed up at the monument.
‘But he wouldn’t ever talk about it—not till right at the end,
anyway. He never even saw this memorial.’

She turned aside to the last of her dead.
‘And now he’s just about alongside it. That was the best I could do
for him.’ She reached into her basket for the final bunch of
roses.

‘I hope you’re not going to ask me to put
flowers on
his
grave,’ Sarah said, with the familiar
sharpness that edged her voice whenever she spoke of Charlie.

Amy shook her head. ‘No, I don’t expect you
to take any notice of Charlie. He wasn’t anything to you.’ She
placed the roses on the still-bare mound of earth.

There was only one flower left in her basket
now: the single red rose. Amy took it up and turned it over in her
hand, careful of the thorns. ‘I suppose I’d better put this on Pa’s
grave myself, then,’ she said, doing her best to keep the
disappointment out of her voice.

‘Amy, you are the most soft-hearted creature
I’ve ever met,’ Sarah scolded. She plucked the rose from Amy’s
hand, strode back to the double grave, and crouched before the
stone.

‘Amy thinks that you and I would have been
friends, Grandfather,’ she said. ‘I’ve my doubts about that. But
Amy loved you, and I’m prepared to believe you cared for her, too.
So that will have to suffice for me. Here you are, then.’ She
placed the rose in front of the stone.

Amy came up behind her and slipped her arm
around Sarah’s waist as the younger woman stood up. ‘Are you happy
now?’ Sarah asked.

‘Oh, yes. I think I’m the happiest woman in
the world.’

‘Good.’ Sarah slid her own arm around Amy’s
waist. ‘I’d do a good deal to make you happy, Amy.’

Her solemn expression melted into a smile,
and she lowered her face to Amy’s. Her breath tickled delightfully
against Amy’s skin as Sarah whispered the secret that, in all the
world, only the two of them shared:

David yawned hugely. He belatedly remembered
his manners and covered the last part of the yawn with his
hand.

‘I’m off to bed, Ma,’ he told Amy, standing
up to punctuate his words. ‘I’m just about asleep already.’ He
stooped to kiss Amy good night.

She twined her arms around his neck to
return the embrace. ‘Good night, Davie.’

‘I suppose you two are going to sit up half
the night talking again,’ David said, casting a grin in Sarah’s
direction.

Amy smiled up at her son, noting with fresh
pleasure the subtle likeness between Sarah and him. ‘We’ll sit up a
bit longer, won’t we, Sarah? We won’t talk loud, though.’

‘You must’ve just about talked yourselves
out by now,’ David said. ‘I don’t know what you keep finding to
talk about.’

‘Why, you, of course,’ Sarah said at once,
allowing herself a small smile. ‘I’m surprised your ears don’t burn
with it.’

‘Well, maybe they would if I didn’t sleep so
sound.’ He yawned again, this time managing to catch the whole of
the yawn with his hand. ‘Night, Ma. Night, Miss Millish.’

‘Dave doesn’t quite know what to make of
us,’ Sarah remarked when David had closed his bedroom door behind
him. ‘Whatever is his sensible mother doing, spending all her time
talking to that odd woman from Auckland?’

‘Davie doesn’t think you’re odd.’ Amy spoke
in a whisper, all too aware of how thin the wall was between the
parlour and David’s room. ‘He’s just not used to seeing me sit up
so late.’ She reached out and took Sarah’s hand. ‘He doesn’t know
I’m trying to catch up on twenty years without you.’

Sarah squeezed her hand in answer. Amy
stared into her face, still struggling to take in the wonder of it:
that the baby she had only been allowed to keep for a precious few
weeks should have found her; should have come back to her as an
assured young woman, with all the gifts Amy had ever prayed her
child might have. And the greatest joy of all was that Sarah was as
ready to return her love as Amy was to offer it. No wonder that Amy
resented even the hours spent sleeping, when they meant time spent
away from her daughter.

‘Let’s go and sit in my funny little
bedroom,’ Sarah said. ‘I haven’t the patience to be whispering all
the time.’

Amy followed Sarah out through the front
door of the cottage and into the room that had been formed from a
closed-in portion of the verandah. It held a bed and a low chest of
drawers, and the floor boasted a small rag rug that stopped a few
of the draughts that nudged through the floorboards on winter
nights. For years it had been ‘the boys’ room’, then ‘Dave’s room’
when Malcolm had gone. Now David slept in the bedroom that had been
his father’s, and the verandah room had been empty since Charlie’s
death. Until three days before, when Amy had miraculously acquired
a full-grown child to put in this room.