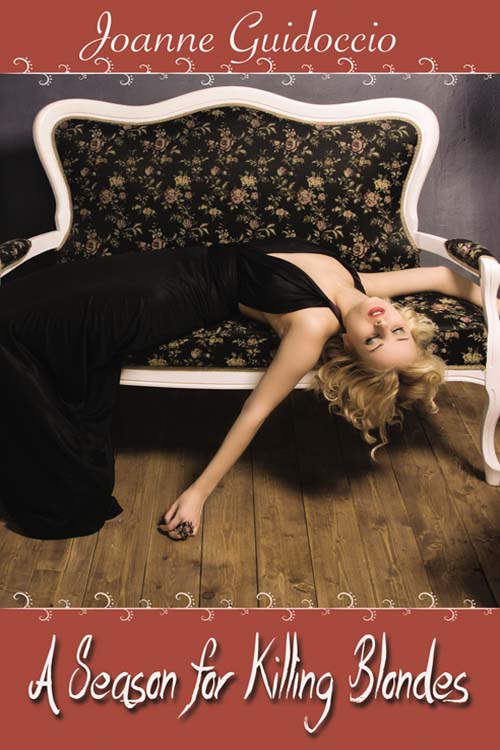 Desserts from the kitchen of Franca Albo Guidoccio:

A word from the author…

I noticed a man making his way through
the crowd that had gathered outside the front window. Tall and lean with salt-and-pepper hair, the man sported a black leather coat and a light gray suit. When he stopped to talk with Uncle Paolo, he flashed a badge. As I approached the two men, my heart started beating faster. Carlo Fantin. How could I have forgotten my old high school crush? If anything, he looked even better now than he did back then. He hadn’t bulked up or lost his hair. He was still hunk material.

He stared, his blue eyes widening in surprise and something else I couldn’t quite define. Amusement. Anticipation. Maybe even lust. He stopped talking to Uncle Paolo and gave me his full attention.

He flashed the beautiful smile that had once captivated me and every other female student at Sudbury Secondary. “Hello, Gilda. It’s good to see you again. Uh, in spite of these circumstances.”

“Detective Fantin,” my uncle shouted in my ear.

Before I could say anything, Aunt Amelia piped up. “We’re so glad you came, Detective. We’ll sleep better tonight knowing that you’re in charge.”

My mother and Sofia appeared at my side. All those years ago when I had fantasized about connecting with Carlo, I had envisioned many wonderful scenarios where we would bump into each other and fall in love—on the beach, dance floor, even at a bar. Never in a million years, did I think we would reconnect in these circumstances with my family in tow.

A Season
for
Killing Blondes

To the five angels

who helped me survive and thrive

during the most challenging season of my life.

A portion of proceeds will be donated

to the Canadian Cancer Society.

To my fellow toastmasters in Guelph. Thank you for inspiring and motivating me to continue with my creative endeavors.

To Johanna Melaragno, Rhonda Penders, Kim Mendoza, and the dedicated staff at The Wild Rose Press, Inc. Thank you for making this book possible.

Three thousand euros worth of pastries.
Can you believe it?

When I agreed to import the pastries, I had no idea I would be subsidizing the failing Italian economy and helping Silvio Berlusconi stay in power for a few weeks longer. Left to my own devices, I would have gone down the street to Regency Bakery, picked up some pastries and just walked them over. But my mother and Aunt Amelia were adamant. The open house for my new career counseling office needed a proper launch, one that could only be achieved with pastries from a Sicilian bakery.

To be fair, both of them were horrified when they saw that final four-figure amount on the invoice and swore me to secrecy. While conspicuous consumption is valued in the Italian community, being taken for a ride is not, and we would never hear the end of it from Uncle Paolo who is still complaining about the ten cents he has to pay for a shopping bag at No Frills.

I watched my mother rearrange the amaretto cookies, stuffed figs, biscotti, and other delicacies that had arrived yesterday. She and Aunt Amelia had brought in their best silver trays and carts and spent hours—according to Uncle Paolo—creating a colorful Italian corner.

“Everything is perfect. Maybe too perfect.” My mother made the sign of the cross and mumbled a Hail Mary.

“Relax, Ma. I’ve got everything under control. Nothing bad will happen.”

“Things have been going too well, Gilda. The lottery win. Your new career. This beautiful office. I’ve had one of my dreams, and you know what that means.”

Not today. Please not today
.
For once, I wanted to get through an event without my mother’s doom and gloom predictions.
Was that even possible?
I wondered. Any other day, I might have made more of an effort, but I couldn’t risk any energy drains today. I plastered a smile on my face and hugged her. “Maybe we’re in for a lucky streak. Don’t you think we deserve it?”

“What’s up?” Cousin Sofia caught the tail end of the conversation as she entered the room. “What’s all this talk about lucky streaks?”

“Ma had one of her dreams,” I explained.

Sofia glanced at her watch. “It’s eleven thirty, and we’re ready, way ahead of schedule. We could have an early lunch.” She winked at me.

My mother’s face brightened, and she licked her lips in anticipation of the luncheon feast that awaited her. Capicola, mortadella, prosciutto, and provolone from Giacomo’s. Fresh buns from Regency. And, of course, the pastries. I saluted Sofia who smiled and shook her head.

As we headed toward the small kitchen in the back area, we heard a familiar scream coming from outside. My mother shook her head. Sofia rolled her eyes. Aunt Amelia again. A hypochondriac well known for exaggerating, over-reacting and fainting whenever she was on the sidelines of an event.

I shivered as we approached the back door, propped open with boxes and small garbage bags.

Sofia muttered, “Why the hell couldn’t they have waited? I would have taken care of it.”

Uncle Paolo appeared at the back entrance. His eyes were unfocused, and his lips trembled as he ran his fingers through a thick crop of white hair. “Come. Come quickly. There’s a dead woman in one of the Dumpsters. And…and Amelia fainted.”

We followed Uncle Paolo outside to the Dumpster. Halfway there, my mother stopped to help Aunt Amelia who struggled to get up. When I reached the Dumpster, I took several deep breaths and gripped the edges with my trembling hands. I stood on tippy toes and gasped with disbelief at the beautiful blonde draped over the refuse. I tried to swallow with a mouth that had suddenly gone dry. Blood roared in my ears as I took in the horrifying scene before me. I had expected to see a stranger, a homeless woman, not Carrie Ann Godfrey.

Wet tears streamed down my cheeks as I remembered the young woman who had been crowned Prom Queen and won local pageants. In high school, we had sat side by side in those classes where teachers insisted on seating everyone alphabetically. While I hadn’t been part of her circle, I had enjoyed an easy camaraderie with her. I had just seen her yesterday when she dropped by and chatted about switching careers.

I turned away from Carrie Ann’s body and focused on Sofia. We were first cousins, daughters of two sisters who had married two brothers. With such tight, interwoven bloodlines, you would think I could predict Sofia’s actions and reactions. But there were moments—like this one—when I didn’t really know or want to know my cousin.

“The woman is dead. Show some respect.” My eyes traveled back to Carrie Ann.

Her marble white skin and blue lips were framed by a sleek blonde pageboy. A printed scarf draped over a cream sweater and her right forearm hooked through the straps of a bronze tote. Her watch and jewelry were intact, and I had a sneaking suspicion that nothing had been removed from her bag. Picture perfect, even in death.

“Who could do…?” I stopped speaking when I heard the familiar moaning.

My mother and Uncle Paolo had revived Aunt Amelia. The two sisters hugged and comforted each other. Thankfully, neither one had seen Carrie Ann’s body, up close.

“Do you want me to call nine-one-one?” Sofia asked.

My mother gasped, and her hand flew to her mouth as she trembled from head to foot. As her tear-filled eyes met mine, I caught glimpses of an old, but not forgotten, fear. She had traveled back in time to war-torn southern Italy and memories of German soldiers who had marched through her small town. To this day, she feared any man in uniform.

“What’s your hurry?” Aunt Amelia asked. “The woman is dead. We can cover her up with some bags and call the police later. That way, we can still have the open house.” Her voice rose. “I’m thinking about the stuffed figs. They’re so moist today. Who knows how long they’ll last.”

Was Aunt Amelia trying to cover up her own fears, or was she thinking about the money that had been spent? You could never tell with her. Her reactions were always off; she never rejoiced during the good times and couldn’t comfort anyone during the sad times.

Aunt Amelia grabbed my arm. “Gilda, stop him! He doesn’t understand about the figs. They won’t be the same tomorrow.”

I swallowed hard as my pulse raced faster. I couldn’t break down and cry in front of my mother and aunt. It would add to the drama and accomplish nothing. I managed a tight smile. “There won’t be any open house. Not today. Not tomorrow. Not for a while.”

Aunt Amelia started crying, and my mother joined in. Sofia and I watched as they headed inside toward the kitchen.

“They’ll feel better after they’ve had their espressos and lunch,” Sofia whispered. “You better call the radio and television stations and let them know the open house has been canceled. I’ll call the Italian bakeries and meat markets.”

Sofia headed toward the main reception area. I decided to make the calls from my office. I knew that Uncle Paolo would take charge and deal with the police when they came. After the last call, my eyes traveled around the room.

When I had found this large space, I couldn’t believe my good fortune. The previous tenants had been three accountants, each with their own private offices. The space also included a large reception area with partitioned sections, a fully-equipped kitchen, two bathrooms and a utility closet. It had remained vacant for over a year after the accountants retired their practices. No one wanted to pay the exorbitant rent that such a space demanded. That is, no one until I came along with my nineteen-million-dollar lottery win and the dream of a career counseling practice that catered to boomers.