Read A Necklace of Water Online

A Necklace of Water 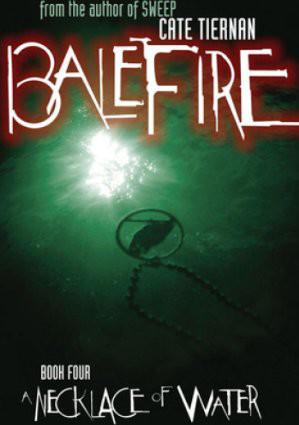 “Someone killed my father,” I got out, the words sounding harsh and bald in that quiet room. “I want revenge. He’s a witch. I want to strip his powers away.”

Suddenly this all seemed so impossible, so unbelievable. What was I doing? Who was I? This wasn’t even
me
.

“You believe in witches, then?”

The woman walked slowly through the shop, as though thinking things over. Every once in a while I felt her dark eyes on me.

“A spell that would strip his powers away is dark magick.” You’ll bear a mark on your soul forever.”

“He killed my father.” I felt like tears were not far away.

“I will teach you a spell,” the woman said. “If you are truly determined to do this. It won’t be easy. Are you prepared for pain? For fear? For darkness?”

“You will need these supplies. Come back when you have them.”

A slip of thick gray paper seemed to materialize out of the air.

I took it, my hand shaking. “Okay,” I barely whispered.

“Go home, little girl,” she said. “Do not come back until you’re ready.”

Book One:
A Chalice of Wind

Book Two:
A Circle of Ashes

Book Three:
A Feather of Stone

Book Four:
A Necklace of Water

Book One:
Book of Shadows

A NECKLACE
OF WATER

Balefire 4: A Necklace of Water

The scanning, uploading and distribution of this book via the Internet or via any other means without the permission of the publisher is illegal and punishable by law. Please purchase only authorized electronic editions, and do not participate in or encourage electronic piracy of copyrighted materials. Your support of the author’s rights is appreciated.

To my friend Paul, through all the ups and downs
.

A Hollow Shell Within a Year

Damned All Over Again

If He Had Loved Her

Could This be Happening?

One Daughter Is Alive

She Will Be Pleased

Not Part of the Plan at All

F
ire. It was creation and destruction at once. It made life possible, yet could so easily snatch it away. It was a beacon in the darkness, warmth in the coldest winter, an eternal symbol of hearth, home, and comfort.

And it could cook steaks.

I glanced beneath the half-moon kettle standing on rusted legs in our backyard. With one hand I felt around the back—

My sister looked at me pityingly, then struck a match and laid it on top of the small pile of coals. Nothing happened, and she pulled out another match. Then I saw the barest disturbance—a wavering around the edge of a briquette, as if the air itself were bending.

“There,” said Clio, pointing. Sure enough, a timid flame was licking a coal, sliding over it like liquid light, and the next minute the other coals wore tiny frills of dancing orange heat.

The sun was sinking rapidly—though it was still daylight saving time, night was coming sooner every day. Now it was twilight, and shadows and shapes in our yard were becoming less distinct.

“Huh,” I said, lost in the way the flames consumed the coals. I looked up at Clio, who was as transfixed as I was. “On mine, we just pressed a switch.”

“That’s ‘cause you’re a Yankee,” she said absently.

I kicked her shin with my bare foot, and she looked up with a faint grin. “The truth hurts,” she said. “I understand.” She sat down on our back steps and gathered up her long, straight black hair, using a big plastic clip to hold it off her neck. “Whew,” she said. “Hot.”

I sat next to her, my own straight black hair awkwardly growing out of a hairstyle I hadn’t kept up. Back home in Welsford, Connecticut, I’d had it cut in precise layers every seven weeks. Now I hadn’t had a trim in months, ever since my father had been killed and I’d been shuttled down here to New Orleans to live with strangers.

Clio and I let out heavy sighs at the exact same time, then met each other’s eyes in a wry acknowledgment of our “twin thing.”

I focused on the grill, trying to find words that wouldn’t set off yet another argument between me and Clio. In the end, all I could come up with was, “Don’t do it.”

Clio frowned, not looking at me, and my chest tightened.

Ever since we’d taken part in the horrible, failed rite of the Treize two days ago, Clio and I had been locked in a battle of wills, and we were both losing. It had been an incredibly powerful rite, a rite that could have—should have—been deadly, and Clio and I never should have witnessed it, much less participated.

But we had. And during the rite, at the climax of power and magick and energy, each person in the Treize had privately spoken their deepest wishes. Mine had been to know for sure what had happened to my father last summer. One minute he’d been standing in front of an ice cream shop, and the next he’d been under the front wheels of a Crown Victoria.

I’d been in France, on a class tour of Europe. I’d gotten a phone call from Mrs. Thompkins, our next-door neighbor and closest friend. My life had ended with that phone call, and the surreal existence I’d been living since then still seemed like it belonged to someone else most of the time.

I’d needed to know: How could it be a coincidence that Dad had died, I’d come to New Orleans, and that I’d found not only my identical twin sister but also a bizarre web of history and pain that had been going on for almost 250 years?

It wasn’t a coincidence. In my vision I’d seen Daedalus performing the spell that had made old Mrs. Beadle have a stroke. I’d seen him magickally guiding her car onto the sidewalk. He’d smacked his hands together right as the car hit my dad. I’d seen him clench his fist as he ended my dad’s life from hundreds of miles away.

Now I wanted to kill him.

Which was impossible, what with the immortality and all. Maybe there was some unknown way I could
try
to kill him, but I’d never be able to carry it out despite what he’d done. I wasn’t a murderer like he was.

But I was planning to destroy him. I still knew barely anything about the
bonne magie
, my family’s traditional religion, although I’d learned that what you put out into the world, you get back threefold. But if breaking Daedalus came back on me threefold, it would be worth it to avenge my father’s death and my life being blown apart for Daedalus’s dark purpose.

After the rite, when we were more coherent and less sick, I’d told Clio what I’d seen. Clio had never known Dad, but he was her father too. I was sure she’d feel the same way I did. And she
was
angry at Daedalus, but it was hard to grieve for something she’d never had.

I didn’t know what spell she’d tossed into the tornado of magickal force that had knocked us all down at the rite. She told me she’d had a vision of herself drowned. Dead. Her skin pale and bloodless, her sightless eyes staring up at a sky black with storm clouds. It was haunting her.

Clio got up and stirred the glowing coals, edges rimmed with fine white ash, and spread them on the bottom of the kettle. She gauged their temperature with her hand, then set the metal grill in place. We’d marinated a steak, and when she dropped it onto the grate, it sizzled and sent up sharp hisses of steam.

Petra, whom Clio had always thought was her grandmother, had been hit hard by the rite. Since then she’d hardly left her bed, and we were both worried about how frail she suddenly seemed. Maybe making her a steak would strengthen her, along with all the healing spells our friend Melysa was doing.

“I’m going to do it,” Clio said, her back still to me. Anger bloomed fast inside my chest, like a scarlet carnation.