A Nation Betrayed: Secret Cold War Experiments Performed on Our Children and Other Innocent People 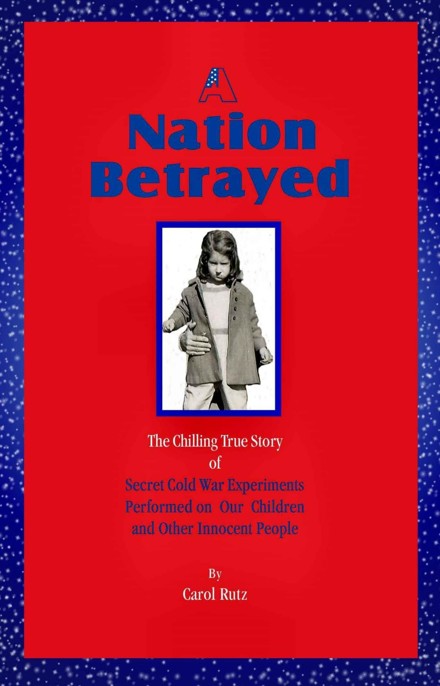 All rights reserved. No portion of this book may be reproduced or transmitted in any form whatsoever, including electronic, mechanical, or any information storage retrieval system, except as may be expressly permitted in the 1976 Copyright Act or in writing from the publisher. Requests for permission should be addressed to:

A Nation Betrayed: Secret Cold War Experiments Performed on our Children and Other Innocent People

I would like to thank the many survivors who wish to remain nameless but who shared their very intimate experiences for this book. Your anonymity does not negate the existence of the horror that you endured. Katherine, I thank you for your courage in detailing the horrors you survived at the hands of Dr. Black. Only those of us who lived through the fear he instilled can really understand the bravery this took. I applaud those brave individuals who testified before the Advisory Committee on Human Radiation Experiments so that their government might be held accountable for the wrongs perpetrated against them in the name of science. I am very grateful to those people who shared books and resource information freely. It has helped make the reality of what occurred more believable. Jeff, the gift of the series of
Doctors of Death
books was most profoundly appreciated.

I would also like to thank my husband for the financial support he has given to keep this project going and his encouragement when I wanted to give up. His belief in the importance of bringing this tragic material before the public was what fortified me and gave me hope. I owe a debt of gratitude to my brother and sister, who gave their permission to use some of their own painful experiences so that my own experience might be better understood. I wish to express my gratitude to Dot and Arlene for their help in the difficult task of editing. I may not have followed all your suggestions, but I certainly learned to look at this body of work with a magnifying glass so that Historians might take it seriously. And finally, bless you Dr. Klein. With your help, I walked through a trail of tears and emerged on the other side a free person at last.

Page 11
Chapter One: The Spoils of War

Page 131 The Iodine 131 Experiment in Alaska

Page 135 The Oregon and Washington Experiments

Page 162 Army Contracts with Outside Agency's

This is the story of someone you know your neighbor, your classmate, your brother or sister, your mother or father. It is the secret they have been holding within their hearts, because they were afraid the American public could not believe their government would carry out human experimentation on children, in direct defiance of the Nuremberg Code, which has been “official” United States policy since 1946.

Some of the very same Nazi doctors who worked in mental institutions before WW II, deciding whether mentally deficient children should be sterilized or killed because of their defective genes, also carried out horrendous experiments in the death camps. Their medical expertise, along with hundreds of Nazi scientists was considered so vital to the “Cold War” effort; that they would be brought into the United States and Canada to work side by side with some of the greatest but most perverse minds the 20th century would ever see.

In September 1999, the Department of Justice succeeded in denaturalizing 63 participants in Nazi acts of persecution; and in removing 52 such individuals from this country.
i
This appears to be but a small portion of those who actually were brought here by our own government. A 1999 report to the Senate and the House said, “…that between 1945 and 1955, 765 scientists, engineers, and technicians were brought to the United States under Overcast, Paperclip, and similar programs.
1
It has been estimated that at least half, and perhaps as many as 80 percent of the imported specialists were former Nazi Party members.”

Not all of those imported participated in experiments, but some did. A number of these scientists were recruited to work for the Air Force’s School of Aviation Medicine (SAM) at Brooks Air Force Base in Texas, where dozens of human radiation experiments were conducted during the Cold War. Among them were flash-blindness studies in connection with atomic weapons tests and data gathering for total-body irradiation studies conducted in Houston. The experiments for which Nazi investigators were tried included many related to aviation research. Hubertus Strughold, called “the father of space medicine,” had a long career at the SAM, including the recruitment of other Paperclip scientists in Germany.
2
On September 24, 1995 the Jewish Telegraphic Agency reported that as head of Nazi Germany’s Air Force Institute for Aviation Medicine, Strughold participated in a 1942 conference
that discussed “experiments” on human beings. The experiments included subjecting Dachau concentration camp inmates to torture and death.
3

The Edgewood Arsenal of the Army’s Chemical Corps as well as other military research sites recruited these scientists with backgrounds in aeromedicine, radiobiology, and ophthalmology.
4
Edgewood Arsenal, Maryland ended up conducting experiments on more than seven thousand American soldiers. Using Auschwitz documents as a guide, they conducted the same type of poison gas experiments that had been done in the secret I. G. Farben laboratories.
5

Wright Patterson Airforce Base in Ohio employed several German Peenemunde scientists, brought there by Army Air Force Colonel Donald Putt.
6
Peenemunde Aerodynamics Institute built the V-2 rockets and German fighter jets using forced slave labor from the Karlshagen concentration camp. The Peenemunde team leader, Wernher von Braun, became the first director of the Marshall Space Flight Center.
7
Just two weeks after the moon landing, von Braun confessed in a letter to an Army General, that he had been a member of the SS. “It’s true that I was a member of Hitler’s elite SS. The columnist was correct. I would appreciate it if you would keep the information to yourself, as any publicity would harm my work with NASA.”
8

Former Peenemunde General Walter Dornberger became vice president of Bell Aircraft Co. after he ended his employment at Wright-Patterson Airforce Base where he worked on a classified rocketry program. Dornberger controlled the production schedule for building the Nordhausen rocket works at the Dora concentration camp where over 20,000 prisoners were killed through starvation, disease, or execution.
9

A Congressional subcommittee hearing in 1994 revealed that up to 500,000 Americans were endangered by secret defense-related tests between 1940 and 1974.
10
These included covert experiments with radioactive materials, mustard gas, LSD, and biological agents. The General Accounting Office testified that between 1949 and 1969, the Army released radioactive compounds in 239 cities to study the effects.

Experiments began in the 1930’s and continued on for the next four decades.

• The government admitted wrongdoing in the 1932 Tuskegee Experiments, where poor black African American sharecroppers from Macon County, Alabama were allowed to go untreated for their syphilis so the effects could be studied.
11
When physicians and researchers involved with the United States Public Health Service offered them free medical care, they believed they had found treatment for what they had been told was “bad blood.” Instead, they were enrolled in an observational research study, without their knowledge or consent. Even though some rudimentary remedies for syphilis were available in the early years of the study, they were not offered to these men, so that the study of the natural history of the untreated disease would not be jeopardized. This study did not end until 1972, forty years after it had begun, and twenty years after penicillin had been identified as an effective treatment for syphilis. On May 16, 1997, President Clinton apologized to the survivors and families of hundreds of men used in this research project.

• Twelve human “guinea pigs” were secretly injected with radioactive Plutonium 239 and uranium in government experiments in the 1940’s. Energy Secretary Hazel O’Leary, in announcing the settlement of $4.8 million to be paid to their families, said the government was “grateful” to the victims for “the tough lessons they have taught us about trust, responsibility, and accountability between the government and the people.”

• Less known were such experiments as the feeding of radioactive cereal in the 1940s and 1950s to young male children who were institutionalized at the Fernald School in Massachusetts. The researchers had little experience with radionuclides in humans; consequently this approach to medical investigation gave them that opportunity. The parents as well as the children were simply told they were being fed a diet rich in iron.
12
According to oral testimony given before the President’s Advisory Committee on Human Radiation, they were told they belonged to the Science Club to make them feel special and then taken to the MIT Faculty Club where it was easier to control them. One researcher said, “It would be nice to do something for them because these kids have been involved, we’ve had to jab them [with needles], and they had to eat a meal—every little drop of it, because you wanted to be sure they got 100 percent of the radioactivity—wouldn’t it be nice to do something for them?”
13

• During the 1950s and 1960s Dr. Saul Krugman of New York University conducted studies of hepatitis at the Willowbrook State School, an institution for the severely mentally retarded. Krugman and his staff systematically infected newly arrived children between the ages of three and eleven with strains of the virus obtained from the feces of Willowbrook hepatitis patients. This was done to study the natural history, effects, and progression of the disease.
14
In 1972 Geraldo Rivera wrote an expose entitled
Willowbrook
, in which he reported that one hundred percent of the patients contacted hepatitis within six months of being in this institution.
15
Obviously, he was
unaware of the intentional infection of these children. When he saw them he compared them to photographs he had seen of the Nazi death camps. When Bobby Kennedy toured this institution in September of 1965 he said, “At Willowbrook we have a situation that borders on a snake pit: ...the children live in filth...” The Journal of the American Medical Association actually went so far as to credit Krugman’s “judicious use of human beings.” Franz Inglefinger, who later became the editor of the New England Journal of Medicine went even further by saying, “By being allowed to participate in a carefully supervised study and by receiving the most expert attention available for a disease of basically unknown nature, the patients themselves benefited... How much better to have a patient with hepatitis accidentally or deliberately acquired under the guidance of a Krugman, than under the care of a rights-minded zealot.”
16