Read A Laird for Christmas Online

A Laird for Christmas 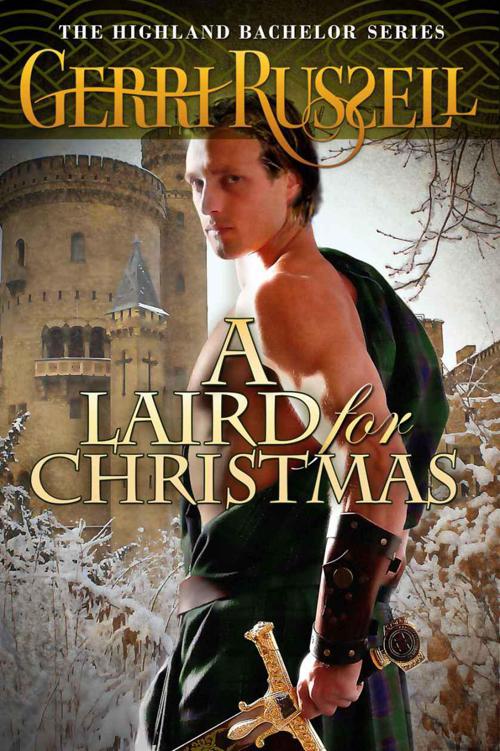 To Carrie Meredith Searing for her friendship and her bachelorette advice. I value both very much.

To my husband, Chuck, you are my hero, always.

Preview:
THIS LAIRD of MINE

Y
ou did what?” Lady Jane Josephina Catherine Lennox asked. The castle’s library suddenly seemed cold, and sound echoed around the overly large space as Jane stared at her aunt Margaret, praying she had misheard.

“Something had to be done, Jane. I cannot sit around and watch you worry over who will attack us and when.”

Jane tried to will away the headache that pulsed behind her eyes at the reminder of Lord Fairfield’s arrival last week. He had come with only two men to support him, and yet he had demanded she turn over the castle and all the Lennox land to him. But that was not all he wanted. He had sidled up to her, and with a pinch to her bottom suggested she become his mistress as well.

Jane shivered at the remembered revulsion. She had never felt so alone or as fragile as she had at that moment. She was the mistress of Bellhaven Castle. That fact had not meant anything to Lord Fairfield, neither had it to the three other men who had come to her with similar offers. They jeered at her, citing her wanton reputation, her passionate nature, and all the other lies that had been spread about her in the last six months.

With the help of her servants, Ollie, Egan, and Angus, Jane had managed to send Lord Fairfield fleeing. But word was out that she was alone with very few men to guard her and Bellhaven. She felt again that fluttering of panic. How would she fight off the next man, or the man after that, if she had no army of her own?

And Margaret wanted to talk about suitors?

“I am only trying to help, Jane. To that end, I have sent for six men to apply for your hand in marriage. These men will demonstrate their skills in competition, but ultimately you will determine the winner.” Margaret straightened and her face tightened with authority. Her aunt never looked like that. Usually her pleasant face was wreathed with a calm and serene smile, bringing out the tiny lines at the corners of her eyes. “I have only done what I had to in order to protect you from losing everything.”

“I cannot lose anything if it is not mine,” Jane said. “Father and Jacob—”

“They are not coming back. The conflict has been over for six months, yet they have not returned to the castle and neither have their men.”

Jane focused on the task before her, studying a clans map her father had created years before. She had been trying to determine if her family’s allies could help her now. She needed an army to defend Bellhaven Castle in her father’s absence. “Father and Jacob are merely detained—”

Jane’s gaze snapped back to her aunt’s. “No.”

“Aye. And you, my dear child, will lose everything. You will lose your home and all the Lennox wealth to your cousin Bryce or some other challenger like Lord Fairfield if you do not find a groom. And fast.”

Margaret reached for Jane’s hands and clasped them tight. “You know your father’s stipulation for you to inherit. You must be married to a man worthy of your love before Christmas Eve.”

“I shall contest the will.”

“There is no time.” Aunt Margaret dropped her gaze to their linked hands. “I know this is unusual, but I could think of nothing else. Christmastide is in twelve days.”

Jane pulled her hands from Margaret’s. “You think the answer to our problem is for me to marry some stranger in less than a fortnight?”

Jane shook her head. “I only need a few more days. I am well on my way to raising an army. That will suffice.”

“Who are these men, Jane? Who have you found? Mercenaries who you can trust no more than Lord Fairfield?”

Jane bristled. “They fight for money. They are Scottish. What other qualifications do they need?”

A twinge of irritation crept into Margaret’s blue eyes. “In spite of the dreadful rumors circulating about you, you have no experience with the men of this world. Inviting strangers here could expose you to even more danger than you face at present. Or have you forgotten the odd accidents that keep occurring? Jane, I honestly think someone wants you dead.”

A chill snaked across Jane’s neck. “I need allies.”

“What you need is a man you can trust to help you determine who is after you and why they are doing such horrible things.”

Odd things had occurred. And Jane could not deny she was at risk without her father and brother to protect her. She bit down on her lip as her thoughts warred between finding her own army and her aunt’s odd answer to her problem. Was marriage the solution? “And you think one of your suitors can keep Bellhaven safe?”

Margaret folded her arms in front of her. She looked at Jane hard. “Marriage is the answer. The only answer. Besides, it is already done. The invitations have been sent.” She drew a breath and paused. “Consider this—these men will be your protectors as they vie for your hand in marriage.”

Jane knew she was losing the battle with her aunt. She groaned. “But to marry in such a way… to a total stranger.…”

Margaret’s face softened. “They are not all strangers, my dear.”

Jane frowned. “Who did you send for?”

“Well, for one, Bryce, your cousin and my nephew.”

“I had to ask him. That does not mean you have to choose him. Since he will inherit if you do not marry, we needed to involve him or he could contest your marriage to someone else. It was the only way to be certain you and your new husband would be safe.”

Jane could not deny that she was in danger, but to turn everything over to a husband? For a moment, she considered her options. The only advantage she could see was that a husband would not be able to turn on her. She stared back at her aunt. Perhaps she could turn the situation to her advantage—use the competitions, as her aunt had called them, to assess the men’s ability to lead an army.

All that mattered was keeping her home.

Bellhaven was all she had left of the family she had once adored. Her mother had slipped away during the birth of her brother, Jacob. Jane had been only three years old at the time. Her father never recovered from the loss of his wife. He had distanced himself from his two children until only recently, when he had taken an interest in teaching Jacob how to use a sword to defend his country. If it had not been for their suddenly widowed Aunt Margaret, Jane and Jacob would have found themselves quite alone during that time. And now her father and Jacob were gone, too, off to fight the Covenanters.

Margaret smiled. “I only want what is best for you, my dear.”

“I know that in my heart. It is my head that needs convincing.” Jane straightened and with a sigh asked, “Who are the others?”

“Men from your past. Some of them are titled, others not. And one is a new friend I made last week who left an impression on me.”

Jane could feel the hopefulness radiating from her aunt. Her cousin, acquaintances, and a total stranger would all vie for her hand in marriage. She forced her chin up. What other choice did she have if she wanted to protect Bellhaven and her people? “When do these men arrive?”

“In three days’ time. I have sent Egan, Angus, and Ollie as messengers.”

Jane drew a slow, deep breath. She had wanted an army to defend the castle in her father’s absence. By her aunt’s doing she would get her wish. An army of suitors would arrive in a matter of days.

T
he first invitation was received by Colin Taylor that same morning in the study of the palatial mansion he had built with his own hands and financed by the profits gained from the use of his sword. Colin schooled his features into that of reserve despite the flare of hope that surged inside him. He read the missive a second time, then set the paper down on the overly large desk that sat between him and the unusually large servant from Bellhaven Castle. “Why was this sent to me?”