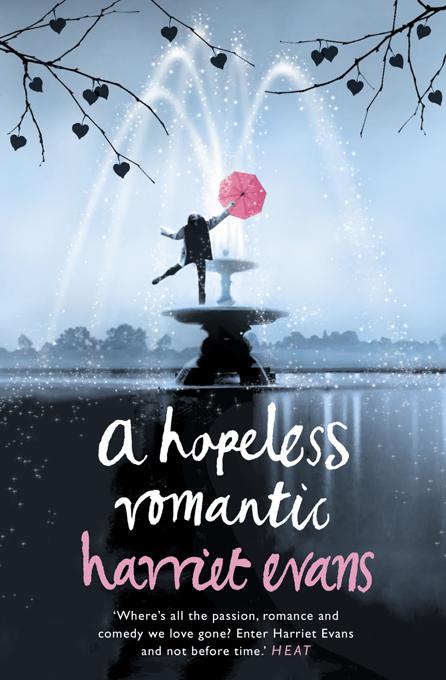 Laura waved her arms around her. “The house, the history, all of your family. All of it. It’s massive. And you’re trying to pretend it doesn’t matter, but it does, Nick.”

He folded her hands into his, like he always did. “Laura. If I can’t have a normal life outside of it, I’m doomed. Of course all this is important to me. But there are other things, too,” he said, and he leaned forward and kissed her.

She pulled away from him.

Nick looked at her in disbelief. “You’re actually going to throw this all away, because you’re an inverted snob,” he said angrily. “You’re a coward,” he said, his voice harsh.

“If you like,” said Laura. Her hands were shaking as she unlocked the car door.

“You know, I actually thought I might be falling in love with you,” he said quietly. He turned and walked toward the house, and didn’t turn back once.

Turn the page to read rave reviews for
A Hopeless Romantic
by Harriet Evans!

“Where’s all the passion, romance, and comedy we love gone? Enter Harriet Evans and not before time.”

Praise for Harriet Evans and
A HOPELESS ROMANTIC

“Harriet Evans has scored another winner with her second novel…will warm you up like brandy on a winter’s night…. Witty, entertaining, self-reflective, and full of characters you’ll grow to love.”

“Superior romcom with heart and soul.”

“A joy from start to finish—sharp, funny, and modern as well as warm, cuddly, and nostalgic.”

“An engaging first-person recounting of a watershed six months in one young woman’s life.”

Originally published in Great Britain in 2006 by HarperCollins
Publishers

All rights reserved, including the right to reproduce this book or portions thereof in any form whatsoever. For information, address Pocket Books Subsidiary Rights Department, 1230 Avenue of the Americas, New York, NY 10020

DOWNTOWN PRESS and colophon are trademarks of Simon & Schuster, Inc.

Visit us on the World Wide Web:
http://www.SimonSays.com

For the magnificent specimen,

my mother, Linda. With all my love.

With many thanks to Kim Witherspoon, David Forner, Beth Davey, and all at Inkwell. No thanks to David for revealing the
Desperate Housewives
finale secret, though. And a huge thank-you to Louise Burke and all my friends at Pocket, especially Maggie Crawford.

How to understand it all! How to understand the deceptions she had been thus practicing on herself, and living under!—The blunders, the blindness of her own head and heart!—she sat still, she walked about, she tried her own room, she tried the shrubbery—in every place, every posture, she perceived that she had acted most weakly.

L
aura Foster was a hopeless romantic. Her best friend, Jo, said it was her greatest flaw, and at the same time her most endearing trait, because it was the thing that most frequently got her into trouble, and yet falling in love was like a drug to her. Having a crush, daydreaming about someone, feeling her heart race when she saw a certain man walk toward her—she thrived on all of it, and was disastrously, helplessly, hopelessly incapable of seeing when it was wrong. Everyone has a blind spot. With Laura, it was as if she had a blind heart.

Anyone with a less romantic upbringing would be hard to find. She wasn’t a runaway nun, or the daughter of an Italian count, or a mysterious orphan. She was the daughter of George and Angela Foster, of Harrow, in the suburbs of London. She had one younger brother, Simon, who was perfectly normal, not a secret duke, or a spy, or a soldier. George was a computer engineer, and Angela was a part-time translator. As Jo once said to her, about a year after they met at university, “Laura, why do you go around pretending to be Julie Andrews, when you’re actually Hyacinth Bucket?”

But Laura never allowed reality to get in the way of fantasy. By the time she was eighteen, she had fallen for: a runny-nosed, milk-bottle-glasses–wearing, primary-school outcast called Kevin (in her mind, Indiana Jones with glasses); her oboe teacher, Mr. Wallace, a thin, spotty youth, over whom she developed a raging obsession and calluses on her fingers, so ferociously did she practice; and about fifteen different boys at the boys’ school around the corner from hers in Harrow.

When she went to university, the scope was even greater, the potential for romance limitless. She wasn’t interested in a random pickup at a club. No, Laura wanted someone to stand underneath her window and recite poetry to her. She was almost always disappointed. There was Gideon, the budding theater director who hadn’t quite come out of the closet. Juan, the Colombian student who spoke no English. And the rowing captain who was much more obsessed with the treadmill at the gym than with her; her dentist, who charged her far too much and then made her pay for dinner; and the lecturer in her humanities seminar whom she never spoke to, and who didn’t know her name, whom she wasted two terms staring at in a heartfelt manner.

For all of these, Laura followed the same pattern. She stopped eating, she mooned around, she was acutely conscious of where they were in any room, thought she saw them around every corner—was that the back of his curly head going into the newsagents? She became a big, dumb idiot whenever any of them spoke to her; so fairly often they walked away, bemused that this nice girl with dark blond hair, a sweet smile, and a dirty laugh who’d seemed to like them then behaved like a tourist in a strange land, eyes downcast, virtually mute. Or they’d ask her out—and then Laura, for her part, usually came tumbling down to earth with a bang when she realized they weren’t perfect, weren’t this demigod she’d turned them into in her mind. It wasn’t that she was particularly picky, either. She was just a really
bad
picker.

She believed in The One. And every man she met, for the first five minutes, two weeks, four months, had the potential in her eyes to be The One—until she reluctantly realized he was gay (Gideon from the Drama Society), psychopathic (Adam, her boyfriend for several months, who eventually gave up on his MA in the Romantic poets and joined the Special Air Service to become a killing machine), against the law ( Juan, the illegal immigrant from Colombia), or Josh (her most recent boyfriend, whom she’d met at a volunteer reading program seminar at work—she worked for the local council—decided was The One after five minutes, and dated for over a year, before realizing that, really, all they had in common was a love of local council literacy initiatives).

It’s fine for girls to grow up believing in something like The One; but the generally received wisdom by the time Laura was out of university, as she moved into her midtwenties, as her friends started to settle down, was that it didn’t really exist—well, it did, but with variations. Not for Laura. She was going to wait till she found him. To her flatmate and childhood friend Yorky’s complaints that he was sick of sharing his flat with a lovesick teenager all the time, as well as a succession of totally disparate, odd men, Laura said firmly that he was being mean and judgmental. To Jo’s pragmatic suggestions that she should join a dating agency, or simply ask out that bloke over there, Laura said no. It would happen the way she wanted it to happen, she said—you couldn’t force it. And that would be it—until five minutes later when a waiter in a restaurant would smile at her, and Laura would gaze happily up at him, imagining herself and him moving back to Italy, opening a small café in a market square, having lots of beautiful babies called Francesca and Giacomo. Jo could only shake her head at this, as Laura laughed with her, aware of how hopeless she was, compared to her pragmatic, realistic best friend.

Until, one evening about eighteen months ago, Jo came round to supper at Yorky and Laura’s flat. She was very quiet; Laura often worried that Jo worked too hard. As Laura was trying to digest a mouthful of chickpeas that Yorky had marvelously undercooked, trying not to choke on them, Jo wiped her mouth with a piece of paper towel and looked up.

Laura looked at her suspiciously. Jo’s eyes were sparkling, her heart-shaped little face was flushed, and she leaned across the table and said, “I’ve met someone.”

“Where?” Yorky had said stupidly.

But Laura understood what that statement meant, of course she did, and she said, “Who is he?”

“He’s called Chris,” Jo said, and she smiled, rather girlishly, which was even more unusual for her. “I met him at work.” Jo was a real estate solicitor. “He was buying a house. He yelled at me.”

And then—and this was when Laura realized it was serious—Jo twisted a tendril of her hair and then put it in her mouth. Since this was a breach of social behavior in Jo’s eyes tantamount to not sending a thank-you card after a dinner party, Laura put her hand out across the table and said, “Wow! How exciting.”

“I know,” said Jo, unable to stop herself smiling. “I know!”

Laura knew, as she looked at Jo, she just knew, she didn’t know why. Here was someone in love, who had found The One, and that was all there was to it.

Chris and Jo moved into the house she’d helped him buy after six months; four months after that, he proposed. The following December, a couple of weeks before Christmas, he and Jo were to be married, in a London hotel. Jo had eschewed grown-up bridesmaids, saying they were deeply, humiliatingly tacky, much to Laura’s disappointment—she was rather looking forward to donning a nice dress, and sharing with her best friend the happiest day of her life. Instead, she was going to be best woman, and Yorky an usher.