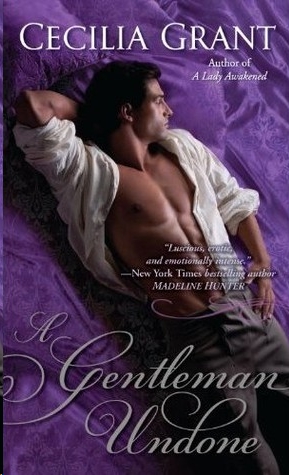 Praise for Cecilia Grant and
A Lady Awakened

“Elegantly written, emotionally powerful … with a compelling combination of exquisitely nuanced characters and lusciously sensual romance. Sweet, poignant, and completely satisfying,
A Lady Awakened
is a romance to treasure.”

“Grant details Regency country life beautifully, with a firm and respectful hand, and the subtle yet engrossing courtship is enchanting and gratifying as it transforms these two strong-minded and very unlikely lovers.”

“From the characters to the language to the love scenes to the plot, so much came together unexpectedly and beautifully. I loved this novel.”

“I’m in love with this author’s voice. It is hard to explain why I love her style of writing so much, but as I read I didn’t want to miss a single word.”

“If you only read one debut this year, this is the one to read. Incredibly sexy, surprisingly sweet. I loved
A Lady Awakened
!” 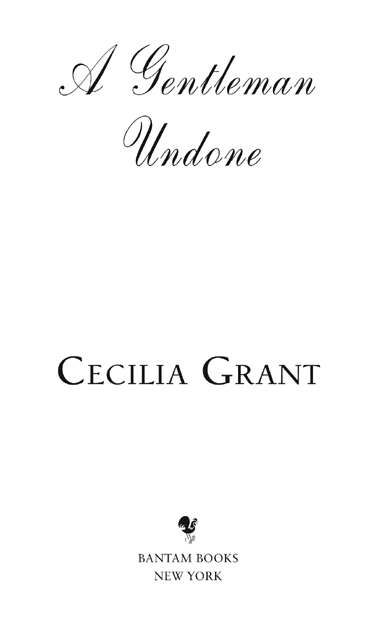 A Gentleman Undone
is a work of fiction. Names, characters, places, and incidents are the products of the author’s imagination or are used fictitiously. Any resemblance to actual events, locales, or persons, living or dead, is entirely coincidental.

Published in the United States by Bantam Books, an imprint of The Random House Publishing Group, a division of Random House, Inc., New York.

B
ANTAM
B
OOKS
and the rooster colophon are registered trademarks of Random House, Inc.

This book contains an excerpt from the forthcoming book
A Woman Entangled
by Cecilia Grant. This excerpt has been set for this edition only and may not reflect the final content of the forthcoming edition.

Excerpt from
A Woman Entangled

W
HAT THE
devil were you thinking, to move him?” The surgeon stank of blood. In the meager candlelight allotted to this section of the makeshift hospital, he was all crags and shadows, and slick to the elbows with the life of other men.

“None of the litter-bearers would stop for him. I waited hours.” His voice bled raw at the edges, rasped to almost nothing by a day of shouting over gunfire, shouting over cannons, shouting over the thunder of two nations’ cavalry.

Just as well he couldn’t speak up. This was a church, or had been before its conscription into such gruesome service. Presumably it would be a church again, once all these men could be transported on to Brussels. Bruges. One of the proper hospitals, with proper beds instead of narrow benches and a cold stone floor. At all events a man ought to show respect.

“You know they have their orders.” The doctor crouched by the bench on which Talbot lay, prodding at his lifeless limbs. Or not lifeless, strictly, because he was
not dead. His chest heaved in a weird rhythm that seemed to bear little relation to breath. “They must take officers first, and then they look for the men we have the best hope of repairing. Lord knows we’ve got enough of those to keep us busy. We don’t need to go foraging for desperate cases.”

Surely a doctor didn’t do any good to a patient by speaking that way in his hearing. Will opened his mouth to say something to that effect, and closed it again. The man’s demeanor must be the least of his concerns. The essential matter, it seemed, was the state of Talbot’s arms and legs. Broken as he was, he’d still been able to move fingers and toes when he lay on the field. So to transport him had perhaps been a mistake after all.

No, not perhaps. Of a certainty, but a certainty barely glimpsed through the haze of three days’ exhaustion. Like some monstrous shape at some great distance, lurching to its feet to begin its shambling, implacable approach.

Time enough to deal with that later. “Well, he’s here now.” Command came without conscious thought, after enough practice. Brush aside what was inessential, clear a path, and set the man on it. “There’s no foraging involved. All I ask is that you take a look and see what can be done for him, same as you’ve been doing all night.”

“Did you not understand me?” The surgeon sat back on his heels, his face lost in shadow. “He’s had an injury to the spine. He’s got no movement or even feeling in his legs. There’s nothing we can do for him.”

He swallowed. It felt like downing a handful of grape-shot. “How can you know that? You’ve barely looked at him. The light in here is too poor for you to properly see. What if it’s simply pain and prostration that’s left him unable to move?” Even through the shroud of fatigue he could hear the senseless, flailing nature of these
arguments. Abruptly he clamped his jaws together, and took a step back.

Something impeded his progress—someone, rather—some infantryman who’d not had the benefit of a lieutenant to find him a place on one of the pews. He lay crumpled on the stones, his wide, unbelieving eyes connecting with Will’s for a second or two before his gaze veered off to the darkness overhead.

He wasn’t making a sound, this one. But others were. Sounds such as one heard in the aftermath of battle, made worse by their concentration in a small space, by the echoing effect of the stone walls, by the awful irony of the setting.

Will breathed in slowly, and breathed out again. Two days ago he’d knelt in the crossroads at Quatre Bras, scrambling to reload his musket—powder, ball, paper,
quickly
—as the cuirassiers in their formidable gleaming breastplates charged in, and he’d thought,
Now I know what Hell will be like
. Some thirty hours later he’d revised the thought: Hell was a sleepless night in frigid rain with one battle behind you and another ahead, sodden uniform squishing comically as you lifted a hand and set it on the shoulder of some frightened young man you couldn’t find the words to console.

Then Hell had been battle again, the noise and the stench and the comrades struck down, and Hell had been the search for survivors, and Hell had been the long wait with Talbot, the bone-weariness, the dwindling hope of aid, the desperation that had finally compelled him to pick up the man and carry him here. With his faculties intact he would not have made that mistake.

Nor would he have made the mistake of believing he’d already seen Hell. Hell, clearly, was the hopeless section of the church-turned-hospital, broken soldiers discarded like so much human rubbish on the stones, crying to
God or the doctor or their mothers for mercy that would not come.

No. A man could drown in such thoughts, and he had better things to do this minute than drown. “Please.” The surgeon was rising to his feet; this was his last chance to find the approach that would compel him to
do something
for the man he’d carried into this hell. “He’s one of mine. I’m responsible for him. He has a wife and child.”

“For God’s sake, Lieutenant, look about you. Every one of these men will be mourned by someone. Every one of them will weigh on the conscience of some lieutenant, or sergeant, or colonel who can point to something he might have done different.” A hand came through the darkness to graze against his sleeve: that was meant to be comfort. “In truth, even the litter-bearers should have had a hard time moving him safely. The outcome might very well have been the same.” That, too, was intended as comfort. Dimly he perceived the fact. “You did what you could. Now I suggest you get some sleep.”