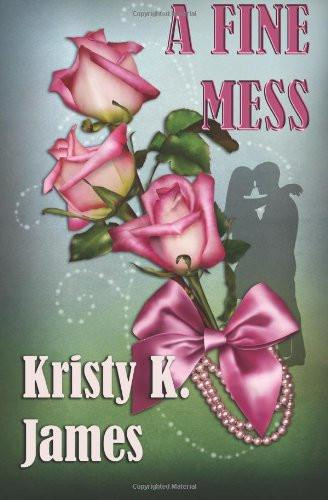 No part of this book may be reproduced in any way without written permission of Copyright holder.

Please take a moment to contact Kristy and say hi:

The Stranger
In
My Head

Annie Blake grunted in a decidedly un-lady like manner as she lifted five plastic grocery bags from the trunk of her decade old Grand Am. It would have been easier to make two trips but, having spotted her father’s blue Taurus parked beside the garage a full three hours before he was due home, had her a bit worried.

She lugged the heavy bags up the two-step back porch and tried to fit the house key into the lock. No easy task as her hand was fighting the weight from five pounds of ground beef, a can of tomato juice and various other items from the small IGA, which she preferred over the larger combination department-grocery stores in the area. In her haste to get inside, it never occurred to her that setting them down for a moment would actually have saved some time.

It didn’t surprise her to run into yet another delay. Her ‘quick’ trip had been anything but, thanks to heavy Labor Day traffic. In what seemed like a mass exodus northward, she guessed that half the county was taking advantage of the last long holiday weekend of the season. And a good many of them had stopped at the IGA for snacks and sodas. Most of them were ahead of her in the check out lines, too.

Finally the key slid into the lock and she was able to set the bags on the floor with a thud, blowing her bangs up and out of her eyes as she quickly closed the door in an effort to keep the air conditioning inside, and the ninety degree heat out.

Not that it was a whole lot cooler in the house. Only about eighty-two, because her mother got too cold at anything lower, but that was okay.
Anything to keep her comfortable.

Peering into the living room, Annie was pleased to see that she was still napping in the over-stuffed recliner, a dark blue afghan covering her from neck to toes, a fluorescent green stocking cap pulled down over her head.

Next she went in search of her father, who was sitting behind his desk in the small study off the dining room. He seemed to be searching frantically through drawers and a small file cabinet, for what she wasn’t sure. But something about the scene scared her and she took a steadying breath before saying softly,

“Dad?
Is everything all right?”

Paul Blake’s brown eyes looked glazed when he glanced up to see his daughter standing in the doorway and she could tell that her presence had startled him.

“All right?”
He shook his head a little and cleared his throat.
“Uh- Yes.
Fine.
Everything is fine. You weren’t here when I got home.”

“We needed a few things from the store,” she explained, not reassured even a little by his words. “Mom was napping so it seemed like a good time.”

“Yes. She was sleeping when I got here. Is she still?”

“Yes. I just looked in on her. What are you doing home, Dad?”

“Home?
I- Uh- There are some papers I need to locate.” In her opinion he looked panicked and her fear turned to a knot in her stomach.

“Is it Mom? Did the doctor call? I thought the last test results were looking better.”

“No. No, the doctor didn’t call. I just need to find some papers. Now I don’t mean to be rude, but if I could just have some time-”

“Okay. I’ll go put the groceries away,” Annie murmured, looking at him for another moment before walking slowly back to the kitchen.

“Lord, please don’t let it be Mom,” she prayed quietly as she put the food away in the bright, airy kitchen that was as familiar to her as her own face in the mirror.

A pretty face, people said. Personally she thought it was rather plain. Nothing about the hazel eyes, straight nose and average lips to make her stand out in a crowd. The only thing that might set her apart, in her opinion was her full head of auburn curls, which actually bordered more on red than
brown,
and only then because there was so much of it.

Enough so that she’d let it grow almost to her waist, hoping the weight of it would help her avoid looking like- Well, looking like
a clown
. Because when she cut it even to her shoulders it did weird things, looking very much like one of the pom-pom's she used to attach to her ice skates when she was a kid.

One that had been chopped in half, to be exact.

But hair was the least of her worries this afternoon.
Because she knew, deep down in her heart, that her father was lying.
As sure as the sun would shine tomorrow, he was hiding something from her.
Something critically important.

She leaned back against the counter, wadding the bags up in her slender hands, twisting them this way and that, and praying for guidance.

Should she go back in there and demand he tell her what was wrong? Or wait for him to tell her in his own time? Waiting seemed like the respectful way to go. But if it regarded her mother, she had a right to know.

Hadn’t she given up her job this past spring to care for her so that he could continue to work and provide the health insurance that had become such an important part of their lives?

Not that she regretted, or resented, putting her life on hold. No, she would do whatever she had to do to make sure that her parents, her mother in this instance, was okay.

And she had to be. The vicious cancer ‘of unknown origins’ couldn’t take her from them. Not yet. She was only fifty-three years old.
Far too young to leave this earth.
Which precisely what she told the Lord several times each day.

And why, she decided firmly, that she wasn’t going to wait for her father to come to her.

Annie pushed away from the counter and strode purposefully down the hall. Another quick peek to make sure her mother still slept, and she walked into the office, closing the door quietly behind her.

But her father was so preoccupied with his search that he hadn’t heard her come in this time either.
Just continued with his frenetic search through a stack of files.

“What?” His head snapped up at her. “I- I thought you went to put away the groceries,” he accused, going back to work, trying to ignore her presence.

“No,
now
.
I know something is wrong and I’m scared. Please tell me what it is,” she pleaded, her voice dropping to just above a whisper.

She watched him hesitate, and then his shoulders slumped, as though in defeat. He
sighed
a sigh that sounded like it came from the tips of his toes.

“You’re right. We do need to talk. Please sit down.”

“It is Mom, isn’t it?” she asked fearfully, her fingers digging into the back of the armchair that sat before his desk rather than sitting in it.

“Annie, please.” He looked pointedly at the chair and she finally did as he asked, sinking down on the soft cushion to wait for the blow she knew was coming.

When it finally came, she wasn’t in the least prepared for it.

“I’m going to be arrested next week.
Probably next Friday.
Possibly not until the following Monday, but I doubt it will take that long.”

“
What?
” she asked dumbly, confusion clouding her eyes.

“I embezzled a hundred and five thousand dollars from the company and someone noticed the discrepancies in my books. An independent auditor will be coming in from New York a week from today. It won’t take him long to figure it out.”

No. That couldn’t be. Not her father.
Maybe someone else’s.
But not
hers
.
Her father had been a Christian for years. He was on the board at church. Well, he had been, for years before his wife was stricken with cancer.

This was the man who had taught her the Ten Commandments by the time she was five years old. The eighth one being, thou shalt not steal. And embezzling was stealing, so she
couldn’t
have heard him correctly.

“Are you okay?” Paul asked, rounding the desk and squatting down beside her. His hands felt almost hot against hers when he took hold of them.

“I-don’t understand,” she murmured, trying to focus on his face.

“I know,” he soothed softly. “I’m sorry, Sweetheart. I’d hoped that your mother would be cured and I could sell the house and everything else to pay it back. I didn’t think I’d ever be found out.”

“Because of your mom.
First I only took five thousand.
Right after her diagnosis.
You know she always wanted to take that trip to the Holy Land. I was afraid I’d never be able to give it to her so- I figured that was the only way.”

Even knowing that she might die, Annie recalled how excited she’d been over the trip. How thrilled she’d been, upon their return, at the thought that she might have strolled along some of the very same paths that her Lord had walked.

“But- What about the rest?” she whispered, closing her eyes tightly to hold back the tears. A few slipped out anyway and she felt him clasp her hands tighter.

“The chemo wasn’t helping. Her only hope was the cancer center.”
Where she was currently receiving treatment, which included spiritual and nutritional intervention, in addition to traditional therapies.
“They wanted the money in advance.”

“I thought the insurance was covering it.”

“No. I tried. I disputed the denial but, in the end, they said no. It was too experimental. So I needed cash.
And lots of it.”
He paused for a shaky breath. “She’s my wife, Annie. I’ve been in love with her since the eighth grade. I can’t let her die.”

Corked by Kathryn Borel, Jr.
Double Shot by Blackburn, Cindy
A Song in the Daylight by Paullina Simons
The Black Sheep's Redemption by Lynette Eason
5 Merry Market Murder by Paige Shelton
A Troublesome Inheritance: Genes, Race and Human History by Nicholas Wade
Red Tide by Jeff Lindsay
The Book of the Unknown: Tales of the Thirty-six by Jonathon Keats
The Carriagemaker's Daughter by Amy Lake
Midnight In The Garden Of Good And Evie by Marianne Stillings