A Division of Souls - A Novel of the Mendaihu Universe 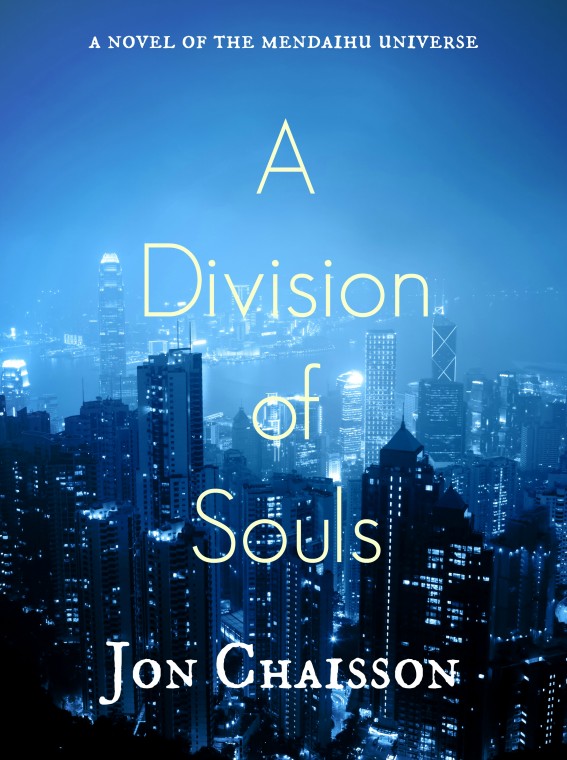 A DIVISION OF SOULS

A novel of the Mendaihu Universe

Also in the Mendaihu Universe:

The Persistence of Memories

The Balance of Light

This ebook is licensed for your personal enjoyment
only. This ebook may not be resold or given away to other people.
If you’re reading this ebook and did not purchase it, or it was not
purchased for your use only, then please return to your favorite
ebook retailer and purchase your own copy. Thank you for respecting
the hard work of this author. If you enjoyed this book, feel free
to leave a review!

Nehalé Usarai let out a nervous breath and
slowly opened his eyes, fighting back a severe bout of vertigo. The
view from the maintenance walkway was certainly breathtaking, more
so than he’d ever imagined…he’d seen the vidmat images and tourism
apps countless times, but it was nothing compared to seeing the
real thing with his own eyes, sensing it with his own soul. He
stood on the one hundred forty-second level of the Mirades Tower in
the center of the city, the tallest building in Bridgetown, letting
his soul take in every ounce of vibrant energy it could. This city
was his lifeline, his anchor to everything and everywhere. The
northern half of the nighttime Bridgetown Sprawl laid itself out
before him, a miles-wide tapestry of boulevards and buildings
glowing with life, both physical and spiritual, and he felt each
one. Thousands of illuminated thoroughfares laced through the city
like golden chains, linking the islands of office towers and
skyscrapers and suburbs spread out across the different districts
of the city.

Its citizens were out en masse on this humid
Friday September night, hundreds of thousands of souls, awake and
aware of the world around them. Masses of people cluttered the
sidewalks of the main thoroughfares, keeping the vibe alive. The
late summer weather brought out all the myriad walks of life that
inhabited this world, a cultural and spiritual interchange of
Earther and
Meraladhza
that made up everyday life on Earth.
He could only wonder how it felt to know, to
sense
it all
intimately, to know they were alive and breathing, what they were
feeling, thinking. As a Mendaihu empath, he certainly had the
ability to do so…but he had not dared to intrude upon their
privacy. He could only speak to them, teach them. Awaken them so
they could further learn on their own.

It was almost a pity he wouldn’t be able to
enjoy this energy flow for much longer.

Startled by the unexpected innerspeak of
another empath nearby, he instinctively grabbed hold of a nearby
guardrail to catch himself. He hadn’t expected anyone to sense him
all the way up here.
Who is this?

I am Shirai,
the voice said. A female
voice, speaking calmly and evenly.
Please, edha, take care on
the walkway. There are high winds up here tonight, and it is
dangerous to be out there without being tethered.

Somfei, Shirai
, he said warily.
I
know who you are. You must have scanned me wandering through the
server banks earlier. I assume you know why I am out here,
then.

Yes, I do
, she said, and lapsed into
silence. He wondered whether or not he had just been caught, well
before he even started. Shirai was a frighteningly strong presence
in this area, bound and tethered to this Tower in her own way, and
she could have had the Tower security on him in a matter of
seconds. She had hesitated, however, and that had made all the
difference. She had chosen to be impartial, as she had been
programmed to be.

He let go of the guardrail again and leaned
up against the black polycrete surface of the skyscraper.
You
understand what it is that I must do, then,
he said to her.

Yes, edha,
she responded.
I
understand.

“Good,” he said aloud, knowing she had
already ceased communication. “And so it begins.”

His eyes darted across the Sprawl.
I am
doing this for all of you
, he thought
.

He took a long, even breath. A second,
slower. Centering his thoughts, his emotions, his spirit. Balancing
himself between the soul within, and all the souls around him.
Becoming one with the Sprawl. And using the strongest innerspeak he
could muster, one that could reach vast distances into the minds
and the hearts of those who were able to hear him, he began.

To all who can hear me below, those who can
hear me within, I pray you listen and prepare: This is a
Proclamation of Cleansing and Awakening.

He paused to gauge the reaction. Seconds
later he felt a fast-growing number of spirits down there in that
Sprawl, pricking up their ears and their soulhearing senses,
listening closely. Many of them just below in the Main Street
Sector, but even more who could hear him to the northeast, in the
Waterfront. Enough for those to prepare if necessary. He smiled,
and continued.

I proclaim this Awakening in the Name of the
One of All Sacred. I call forth the Spirits of the Mendaihu and the
Shenaihu, the Holiest Spirits of Trisanda. I call them both to
begin the Awakening.

He started with a summoning. Nehalé closed
his eyes and held out his hands, fingers wide, and took another
very slow and deep breath. He let his spirit reach out to the
thousands below him, as if silently asking for their assistance.
They responded without question, sending their own gentle wave of
life energy towards him, knowing full well what was to come, and
welcoming it wholly. He could not suppress a smile as the energy
flowed into his open hands, at first a trickle but growing
exponentially until he could feel the weight in his fingertips. It
felt like he’d dropped his hands in a swift river, the force
consistent yet never destructive.

…
allei aiya,
he said in gesture of
thanks.
I bless all of you.

He stood there for a good few minutes,
taking in all of the energy that he could safely handle and
balancing it within himself. He’d summoned this kind of power in
the past, having performed countless Awakening rituals throughout
his calling, but none to this magnitude. He had faith in himself,
knew he’d be able to keep this delicate balance of life and spirit
within his own mortal skin, despite the pain and the damage he’d
feel after the ritual was completed. He had to have this faith…for
he had faith in the one he was to awaken this evening. This was all
for her.

His fingertips ached and his palms began to
burn from the constant energy intake. He was coming close to
overflow at a frightening pace. He’d summoned much more than he’d
expected, but it still felt far from adequate. Could he make this
ritual happen with such a paltry amount? He needed just enough to
start it, enough to prime the cycle and get it flowing. That had
been his mission all along, and the reason why he was up here at
this insane height. He was going to use the natural flow of the
spirit winds that used the Mirades Tower as its river. All he
needed to do was prime the Rain of Light and set it flowing at a
faster pace. The acceleration would do the rest for him. Confident
in his thoughts and actions, he closed off the summoning by balling
his hands into tight fists. Slowly he drew them back until they
were directly in front of his heart.

dehndarra Né hra nyhndah,
he said.
It is time to open your eyes.

He nodded once to himself, and pushed opened
hands out into the air. A shockingly intense wave of spiritual
energy blasted out of them, the strongest he’d ever projected in
his lifetime, enough to forcibly push him up against the Tower wall
and nearly knock all the wind out of him. The pain in his palms was
exquisite...it stung like all hells and he'd have scars
afterwards.

Almost immediately the Tower began to
tremble in response. It began as a subtle vertical shifting, but
seconds later it grew in intensity to the point where he could feel
a thick vibration under his feet, the plates of polycrete scraping
and windows rattling all around him. He crouched slightly and
adjusted his aching arms for balance, riding the vibrations as they
passed. He couldn’t let go, not just yet.

Suddenly, and a hell of a lot quicker than
he’d been expecting it, his inner sensing felt a surge of spiritual
energy welling up within the Tower, pressing against its black
polycrete skin, threatening to burst. The rattling intensified, an
earthquake within the walls that could explode and cast Nehalé off
with it. Skittering a little to his left and shifting the energy
flow to one hand, he grabbed a railing with the other and gripped
it tight. This was all expected, however. It wasn’t going to be a
quiet ritual, not by a long shot. He shut his eyes and prayed to
the One that his strength would hold out. Minutes ticked by as the
spiritual energy swelled and fused and pushed, frantically
searching for an escape. He couldn’t disconnect until the Rain of
Light increased the flow on its own.

Not yet…
he whispered within.
Not…yet…

Down below, the thousands of spirits whose
calm attention he’d attracted had begun backing away, taking and
guiding others with them. They may not have known what was coming,
but they understood the consequences of being too close to the Rain
right now. They were protecting their own souls and those around
them. They were embracing this Awakening, just as Nehalé had
expected. They knew what was going to happen, any moment now. They
knew the importance of this ritual, and anticipated its outcome.
They would not deny themselves the pleasure and the rarity of
sharing this with the spirit it was so obviously for. If she was to
be a part of this, they would also be, without question.

Finally, far away in a quiet northern sector
of the city, Nehalé felt something shift. He felt it within, a
movement of Light and spirit, a soul stirring for the first time
like an unborn child kicking within the womb. He shivered, first
with surprise and then with elation. It was time, now. He let go of
the handhold and lifted his hands one last time, palms open, and
slashed through the air with a violent downward thrust, severing
his own connection with the Rain.

Awaken!
He cried out, to all who
could hear.
Awaken!

And the Rain of Light responded, furious and
unrestrained. The air
tore
around him, slamming back into
place with such force it sent a shockwave out into the city. Nehalé
screamed, a guttural, primal scream of pure emotion he could not
hold back. His soul felt as if it was being forcibly torn out of
his body. He had anchored it the only way he could, to the Tower
and the Sprawl…and he did all he could to make sure it stayed
anchored until this was over. Down below, he felt hints of
confusion and fear; lights flickered, transformers blew; windows
rattled and shattered. Cars and transports stopped quick, tires
squealing on pavement. Pedestrians stopped midstride and nearly
fell. Then —

Random (Going the Distance) by O'Neal, Lark
The Forced Marriage by Sara Craven
Grace: A Christmas Sisters of the Heart Novel by Shelley Shepard Gray
The Eye of Winter's Fury by Michael J. Ward
A Play of Treachery by Frazer, Margaret
The Stranger's Woes by Max Frei
Sudden Impact by Lesley Choyce
The One You Want by Showalter, Gena
MC: Brighton by L. Ann Marie
Silver by Andrew Motion