Read A Brief History of the Spy Online

A Brief History of the Spy 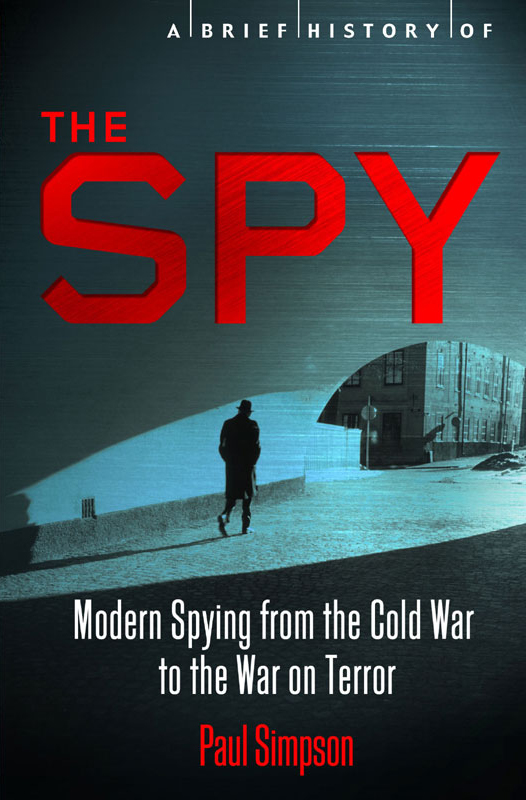 Paul Simpson
is the author or co-author of over a dozen nonfiction books including an acclaimed round-up of conspiracy theories. He has edited and contributed to numerous international entertainment magazines and currently oversees news and reviews website
SciFiBulletin.com

Recent titles in the series

A Brief Guide to the Supernatural

A Brief Guide to Star Trek

A Brief Guide to James Bond

A Brief Guide to Secret Religions

A Brief Guide to Jane Austen

A Brief Guide to J.R.R. Tolkien

A Brief History of Angels and Demons

A Brief History of Bad Medicine

A Brief History of France

A Brief History of Ireland

A Brief History of Slavery

A Brief History of Sherlock Holmes

A Brief History of King Arthur

A Brief History of the Universe

A Brief History of Roman Britain

A Brief History of the Private Life of Elizabeth II

A BRIEF HISTORY OF
THE SPY

First published in the UK by Robinson,

An imprint of Constable & Robinson Ltd, 2013

The right of Paul Simpson to be identified as the author of this work has been asserted by him in accordance with the Copyright, Designs and Patents Act 1988

All rights reserved. This book is sold subject to the condition that it shall not be reproduced in whole or in part, in any form or by any means, electronic or mechanical, including photocopying, recording, or by any information storage and retrieval system now known or hereafter invented, without written permission from the publisher and without a similar condition, including this condition, being imposed on the subsequent purchaser.

A copy of the British Library Cataloguing in

Publication data is available from the British Library

First published in the United States in 2013 by Running Press Book Publishers,
A Member of the Perseus Books Group

All rights reserved under the Pan-American and International Copyright Conventions

Books published by Running Press are available at special discounts for bulk purchases in the United States by corporations, institutions, and other organizations. For more information, please contact the Special Markets Department at the Perseus Books Group, 2300 Chestnut Street, Suite 200, Philadelphia, PA 19103, or call (800) 810-4145, ext. 5000, or email
[email protected]
.

Digit on the right indicates the number of this printing

Visit us on the web!

In memory of my mother, Mary Howden-Simpson, who introduced me to Simon Templar, James Bond and so many other fictional heroes.

‘The one thing you can bet is that spying is never over. Spying is like the wiring in this building – it’s just a question of who takes it over and switches on the lights.’

Chapter 10  The Empires Strike Back

Chapter 11  The Year of the Spy

Chapter 14  The War on Terror

The invading army is coming up on the defenders’ stronghold. It’s heavily fortified – a high wall surrounds the city, which appears, at first glance, to be impregnable. The army commanders know that there is no option: they must take the city, and quickly, or their campaign will lose momentum.

Two spies are ordered to find out the lie of the land. They infiltrate the city, but are nearly captured. One of the locals, a prostitute who has been harbouring them, sends the army off in the wrong direction, while the spies manage to escape back to their own lines. With the information they have retrieved, the commanders make a successful plan of battle – and take the city.

A scene from the Iraq War, or perhaps one of the Balkan conflicts of the late twentieth century? No, this is a reconstruction of events surrounding the capture of the town of Jericho, as described in the Book of Joshua, one of the early books of the Bible, which can be dated to somewhere around the fourteenth century BC. Modern spies might be able to
transmit information to their superiors using hi-tech equipment, but the core demands of the espionage world have hardly changed in thousands of years. Men and women (from ancient times, spying has always been an equal opportunity profession) have to put themselves at risk in order to obtain information that other people simply do not want them to have.

There can be few people who haven’t seen a spy film, especially one of the score of movies made featuring Ian Fleming’s fictional secret agent, James Bond. The suave, debonair, tuxedoed Roger Moore incarnation of that character belongs firmly in the realms of fiction, but the more gritty, determined agent, as embodied by Daniel Craig’s twenty-first century version or the screen interpretation of Robert Ludlum’s Jason Bourne, is a far more accurate account of life in a world of treachery and deceit. Many of the spies whose deeds are examined in this volume carried out feats that would be dismissed as pure fiction, were they not fully documented.

This
Brief History of the Spy
focuses on the period from the Second World War up to the present day, the time of the Cold War and the War on Terror. Even within that comparatively short time, the world in which spies operate has changed almost beyond recognition. The threat from terrorism is today perceived as much stronger than the fear of the Russians or the Chinese – but with events unfolding in the Middle East, will that continue to be the case?

Some of the changes have occurred for pragmatic reasons. ‘The enemy of my enemy is my friend’ is a precept that applies in espionage as much as it does in diplomacy. One jaded CIA officer sarcastically observes in the 007 film
Quantum of Solace
, ‘You’re right, we should only deal with nice people’, but who are the ‘nice people’? That line resonates when considering the debate over the use of ‘extended interrogation techniques’ (what most would regard as torture) by the CIA in the War on Terror.

One of the most fascinating things about researching and writing this overview has been the discovery of so many cases that never really entered the public consciousness. I’ve been intrigued by spies since reading my first Bond novel and being given
The Master Book of Spies
with its pictures of secret cameras and other cool equipment as a youngster. My first book was a history of James Bond, so I feel in a way I’ve come full circle, chronicling the exploits of those who labour on the real battlefields, facing imprisonment, torture or worse. To those unsung heroes this book is also gratefully dedicated.

A note on spellings: names translated from Cyrillic or Arabic languages into English can appear in many different forms. The most common (particularly Osama bin Laden, and al-Qaeda) are adopted here, but where original documents are quoted, the spellings and abbreviations within are retained (notably UBL for Usama Bin Ladin). Original newspaper and magazine articles have been referenced where possible, along with declassified documents released by the FBI and the CIA. A select bibliography is provided at the end of the book.

Surprising as it may be to those of us brought up on a diet of spy books and films, at the end of the Second World War most of the government agencies whose acronyms and names have become so familiar did not exist as we know them today. There was no CIA. The letters KGB didn’t instil the terror that they would from the fifties onwards. There was no state of Israel, so its intelligence organizations Mossad and Shin Bet didn’t exist either. The South African espionage group nicknamed BOSS wasn’t around. Pre-Communist Germany had no Stasi.

The geopolitical shifts at the end of the war, set down in agreements between the leaders of America, Great Britain and the Soviet Union at Yalta and Potsdam in 1945, meant that the intelligence communities were dealing with a very different landscape to the one between the World Wars and during the conflict itself.

Displaying the paranoia for which he is justly remembered, Soviet leader Josef Stalin was already spying on his allies – his muted reaction to US President Harry S. Truman’s hints about
the atomic bomb indicated to many that he was already well aware of the American progress, and, indeed, may even have known more than his counterpart. Soviet agents were already part of the British intelligence service hierarchy, and in place in strategic locations around the globe.

Truman came to realize that the Soviets were not to be trusted, and under his presidency the American intelligence community was reorganized to deal with the threat as the Cold War grew ever chillier. The British Secret Intelligence Service (popularly known as MI6, a designation used in this book for avoidance of ambiguity) also focused its attention on Russia and its satellites. The Cold War heated up and cooled down through successive regimes, with proxy wars fought around the world.