Read A Body in the Bathhouse Online

A Body in the Bathhouse 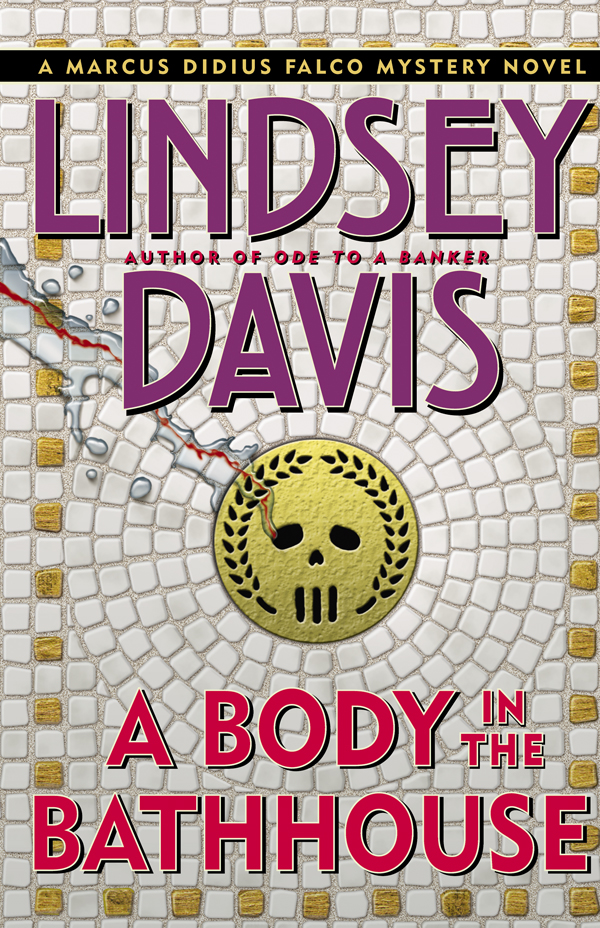 If you purchase this book without a cover you should be aware that the book may have been stolen property and reported as “unsold and destroyed” to the publisher. In such case neither the author nor the publisher has received any payment for this “stripped book.”

TO LINDSEY DAVIS GO THE LAURELS!

“The action is fast and furious, and readers will divide their time between being mystified and laughing out loud.”

“A BODY IN THE BATHHOUSE is an interesting and humorous historical mystery.”

“Lindsey Davis’s excellent and funny series [is] a cross between
I, Claudius
and
Mystery!
”

“Fascinating … just as fresh as the first [book in the series]. … Of course, any of the Falco books could be subtitled, ‘When in Rome, do in a Roman.’”

“If Travis McGee traveled in time back to treacherous, civilized Rome in
A.D
. 72, he might be something like Marcus Didius Falco.”

“As always, Falco amuses, instructs, and engages the reader. … You have a glorious treat ahead of you.”

“A lot of fun, with nice touches of (usually black) humor. Falco has similarities to Robert Parker’s Spenser; if you like your PIs hard-boiled but soft-centered, try A BODY IN THE BATHHOUSE.”

“Great fun, an artful blend of suspense, superb characterization, and classical history. … If you like
I, Claudius
, you’re going to love Marcus Didius Falco.
Ipso facto
.”

“I enjoyed Davis’s skill at mixing humor, history, and a first-class mystery in which she creates a rare kind of hard-boiled detective.”

“Davis is both a deft storyteller and a scholar. … [A] top-drawer series … smart, amusing … entertaining.”

“One of the best entries in a long-running series that has kept a consistently high standard. … If you enjoy historical mysteries or have ever dealt with contractors who don’t deliver, you’ll love this book!”

The Course of Honor

The Iron Hand of Mars

A Dying Light in Corduba

Three Hands in the Fountain

Two for the Lions

One Virgin Too Many

Ode to a Banker

For Richard, again. This one could only be for you. With all my love.

The remains of the Roman Palace at Fishbourne, near Chichester on the south coast of Britain, were unearthed by a mechanical digger during the construction of a water main in 1960. It seemed hard to believe that a Roman building of such wealth and importance
could
be found here. Some of the palace lies under modern houses, but the excavation and preservation of what was accessible owes everything to local volunteers and benefactors. It is still a matter of speculation why such a magnificent building was created in this unlikely place.

If Fishbourne had a Roman name, we don’t know it. The palace of Togidubnus (as we now call him), Great King of the Britons, was constructed in various phases. In this novel, the Neroian “proto-palace” is called “the old house”; it is the grand Flavian expansion that Falco sees at building site stage. I have tried to use only what we know from excavation. Any mistakes are my responsibility and if future work reveals new treasures or leads to new interpretations, we shall just have to say: “They changed the design after Falco saw the plans.”

There were various Roman villas in a similar style along the coast; these were probably homes to local dignitaries, perhaps relatives of the King. That the one at Angmering was built by an architect is my own invention.

This is the first time I have based a story entirely on one archaeological site, and I am enormously grateful to everyone at Fishbourne, especially David Rudkin, the current curator, for welcoming the prospect so cheerfully. The palace belongs to Sussex Archaeological Society. It has a museum and other facilities and is a highly recommended site to visit. 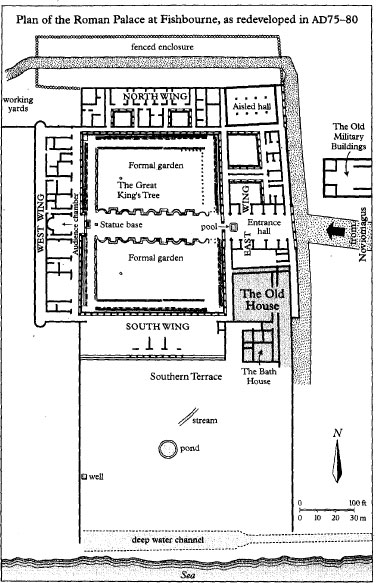 B
UT FOR
Rhea Favonia, we might have lived with it.

“There’s a
smell
! There’s a horrible smell. I’m not going in
there
!”

I didn’t need to be an informer to know we were stuck. When a four-year-old girl reckons she has detected something nasty, you just give in and look for it. My little niece would not go near the bathhouse until we proved there was nothing horrible in the caldarium. The more we scoffed and told her the hot room was only smelly because of its new plaster, the more Rhea screamed hysterically at bathtime. There was nothing visible, and the rest of us tried to ignore it. But the child’s insistence unsettled everyone.

There
was
a faint odor. If I tried sniffing it out, I lost it. When I decided there had been nothing, straightaway I smelled it again.

At least Helena and I were able to go home to our own new house. My sister Maia and her children had to stay on there on the Janiculan Hill, in the home that was supposed to be their refuge from trouble, living with that other kind of trouble, Pa. My father, Geminus, and I were in the throes of a houseswap. While I tried to organize decorators to renovate his faded old lair on the bank of the Tiber, he took over the spread on which I had already worked for months, where all that remained for completion was the new bathhouse.

The Dragon's Queen (Dragon Lords) by Michelle M. Pillow
Take It Off by J. Minter
The Satan Bug by Alistair MacLean
The Vampire Voss by Colleen Gleason
Gambling on a Secret by Ellwood, Sara Walter
The Unforgiven by Storm Savage
Boston Avant-Garde 6: Chiaroscuro by Kaitlin Maitland
Milo and One Dead Angry Druid by Mary Arrigan
Never Love a Stranger by Harold Robbins
Chloe by Lyn Cote