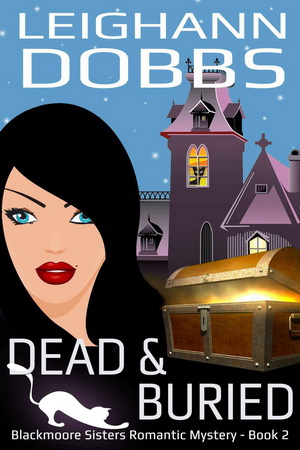 This is a work of fiction.

No part of this work may be used or reproduced in any manner, except as allowable under “fair use,” without the express written permission of the author.

More Books By This Author:

3 Bodies and a Biscotti

Snow White and the Seven Rogues

Morgan Blackmoore slipped out the kitchen door of the seaside mansion she shared with her sisters in the sleepy town of Noquitt, Maine. Stretching her arms over her head she closed her eyes, and took a deep breath, relishing the sting of the salty sea air and the warmth of the early morning sun on her face.

She turned east toward the Atlantic Ocean where the sun was just coming up. Her cat, Belladonna, rustled in the leaves at her feet and a group of seagulls made a cacophony of sound to her right. There seemed to be more gulls than usual this morning. Morgan opened her eyes, turning toward the sound.

Her heart skipped a beat when she saw the flock of gulls circling. There were
way
too many birds. Something must have attracted them and Morgan had a feeling it wasn’t anything good.

She picked her way through her herb garden toward the edge of the cliff, Belladonna trotting along at her side, while the seagulls circled and flapped noisily above. Her stomach felt like she’d swallowed a lead ball, and her mind conjured up a scene from the old Hitchcock classic,
The Birds
, as she approached the point of land where the channel leading to the cove on the right of her house met with the ocean on the left.

Belladonna sprinted ahead of her and poked her head over the side of the cliff, then looked up at Morgan with her ice-blue eyes.

“What is it?” Morgan craned her neck over the side, but whatever was attracting the seagulls was hidden behind an outcropping of rock about seven feet down.

She sighed, rubbed her palms on her faded jeans and put one foot tentatively on the slope of the cliff. Unlike the ocean side of the cliff, which was a straight drop, the point was more gradual with outcroppings of rock that she could navigate on the way down.

She balanced herself by grabbing onto a rock while her foot grappled for placement. Her heart jerked wildly as she dislodged some small stones, creating a mini rockslide. Holding her breath, she watched the rocks plunge almost one hundred feet into the turbulent ocean below. If she fell, it would mean a painful and certain death.

Morgan looked up at the white cat who was staring down at her. “Yeah, easy for you to say. How come you’re not down here with your perfect balance and nine lives?”

Belladonna just blinked at her lazily from above, then trotted off.

“Okay, fine. I get it. I’m on my own.” Morgan grabbed onto a tree that was growing sideways on the slope and inched over to the outcropping, her free arm grabbing onto the rock and pulling herself along until she was far enough to peer over.

She sucked in a breath, a jolt of electricity piercing her heart when her eyes found the object of the seagulls’ attention.

Lying on the rocks was a man, his legs and neck bent at impossible angles. His dead eyes stared straight through her. His right arm was twisted underneath him. His left was visible and Morgan noticed an unusual black mark on the palm.

She jerked back, then whirled around and scrambled back up the slope, kicking loose stones that pinged against the rocks below in her wake. Pushing herself up onto the grass, she turned to run in the direction of her house at full speed. But instead of moving forward, she smacked straight into her biggest enemy.

“Leaving the scene of the crime?”

Overton glared down at her, his large belly bulging over the belt of his brown pants. Sweat trickled down his forehead under the brim of his hat.

Morgan pushed herself away from him and looked back in the direction of the cliff.

“What are you talking about? I saw the seagulls and went down to see why they were gathered there. It is, after all, my property.”

Overton narrowed his eyes at her, the toothpick jutting out of the side of his mouth wiggled back and forth as his teeth ground on it. “Or you could have been down there covering something up.”

Morgan’s eyebrows knit together as she turned back to face him. She spread her hands. “What would I be covering up? And how did
you
get here before I even called the police?”

“Gordy Wright saw the body on his way out to pull his lobster traps this morning. He called it in.”

Morgan looked at the channel that led to Perkins Cove where most of the fishermen docked their boats. Her house sat at the very end of the channel—the point where it emptied out into the ocean so, naturally, the boats had to sail by her house to get out. Gordy always went out at sunrise and would certainly have noticed the gulls and body on the cliff.

“It’s awfully suspicious in my book that a body shows up in your yard after the whole Littlefield incident,” Overton said.

Morgan crossed her arms over her chest, struggling to stay calm. “You know I had nothing to do with that.”

Earlier in the summer, Overton had accused Morgan of killing the town shrew, Prudence Littlefield. It had taken some clever detective work on the part of her and her sisters to find the real killer and clear Morgan’s name. Even so, it seemed Overton had it in for them and Morgan could think of no good reason why.

Which was why she had to tread carefully with this dead body on the cliff. If Overton could find a way to pin it on her or one of her sisters, she was sure he would.

A noise over by the house captured her attention and she glanced over to see her sister, Fiona, hurrying toward them, her long red curls flying behind her as she walked.

“There’s a body on the cliff.” Morgan nodded her chin toward the point.

“I don’t know. I saw the seagulls and went over to investigate. Never saw him before.”

Overton snorted. “We’ll see about that. I doubt you girls are as innocent as you want me to believe.”

Fiona took a step closer to him, pulling herself up as tall as she could. “Now you see here, Overton. You can’t go around accusing us of everything that happens in this town—”

Several members of their small town police force had come up behind them and the girls turned in their direction.

“Over here.” Overton started toward the cliff then turned back toward Morgan and Fiona. “I have a sneaky suspicion there’s more to this than meets the eye and I bet the two of you are right in the middle of it.”

He glanced back at the officers who had continued on and were halfway to the cliff’s edge. Removing the toothpick from his mouth, he jabbed it in Morgan’s direction.

“You might want to call your fancy lawyer, because if I find evidence you had anything to do with this, I’m going to make sure you feel the full force of the law. This time you won’t get away so easy.”

Morgan watched him shove the toothpick back in his mouth and lumber off toward the cliff. She half hoped he would trip and fall right over then caught herself, realizing that would be a terrible fate, even for him.

The two girls watched him while he approached the cliff’s edge when, out of nowhere, Belladonna streaked in front of him causing him to stumble and almost pitch over the side.

“Damn cat! Thing should be shot.” He glared after the cat who had disappeared into the bushes.

Morgan and Fiona had to clamp their hands over their mouths to keep from laughing out loud as they walked back toward the house.

Morgan opened the kitchen door and Belladonna appeared from nowhere, scooting inside ahead of them.

Fiona reached down to pet the cat. “Good girl, you want a treat?”

Belladonna walked over to her bowl and sat in front of it licking her paw, as if she were ambivalent about the treat, while Fiona got a can of tuna from the cupboard.

“I see Overton is still as big a jerk as ever,” Fiona said.

“Yep. He worries me. There’s no telling what he might do.” Morgan peered out the back door window toward the cliff, where she could see the police department turning out in full force.

“What’s going on out there?”

Morgan’s sister, Celeste, stood in the doorway, her concerned gaze directed at the corner of the yard where the police were now swarming.

“There’s a body on the cliff,” Fiona said as she flipped open the tuna can then bent to scoop the fish into Belladonna’s dish.

“Excuse me?” Celeste ruffled her short blonde hair, still wet from showering, as she walked over to the window.

“Yeah, it was weird. I saw a bunch of seagulls over by the cliff and went over to investigate and there was a guy lying on the rocks. Dead.” Morgan felt a shiver go up her spine. It had been only four years since her mother had taken her own life near that same spot. This one was too close for comfort.

“Why would a dead body be in our yard?” Celeste turned her wide, ice-blue eyes on Morgan.

“That’s a good question. What
would
someone be doing on the cliff?” Morgan’s eyebrows creased in the middle.

“And why would someone kill him there?” Fiona asked. “Or did he die from falling off the cliff?”

Morgan pursed her lips together. “You know, I’m not exactly sure. He wasn’t far down so I don’t see how he could have died from a fall, but in the dark I guess he might have tripped and hit his head or something. I didn’t really look at him that close.”