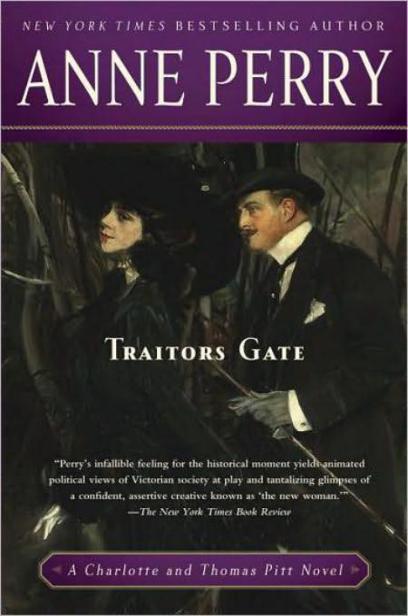 Another gem in her Charlotte and Thomas Pitt
oeuvre …
Extraordinarily rich in detail and the fog-laden atmosphere of the time, Perry brings to life the quirky society folk of London…. Her work soars with pathos and humor and, of course, a crackerjack mystery.”

“[The] historical background is carefully presented.”

“Perry writes with both flowery overstatement and the kind of formality and restraint that befits her Victorian setting.”

“Their fifteenth suspenseful turn through the wealthy front parlors and deadly back alleys of Victorian England demonstrates once again a fictional world rich with historical atmosphere and weav[es] a tale of mystery, corruption, detection, and justice as complex as the colorful characters who populate its pages.”

By Anne Perry
Published by The Random House Publishing Group:

DEATH IN THE DEVIL’S ACRE

THE FACE OF A STRANGER

THE SINS OF THE WOLF

WEIGHED IN THE BALANCE

A BREACH OF PROMISE

DEATH OF A STRANGER

The World War I Novels:

NO GRAVES AS YET

ANGELS IN THE GLOOM

AT SOME DISPUTED BARRICADE

WE SHALL NOT SLEEP

Published in the United States by Fawcett Books, an imprint of The Random House Publishing Group, a division of Random House, Inc., New York, and simultaneously in Canada by Random House of Canada Limited, Toronto.

F
AWCETT
is a registered trademark and the Fawcett colophon is a trademark of Random House, Inc.

Other Books by this Author

P
ITT SAT BACK
on the wooden seat and watched with profound pleasure as the sun faded on the old apple tree in the center of the lawn and for a few moments gilded the rough bark. They had only been in the new house a matter of weeks, but already it had a familiarity about it as if he were returning rather than moving in for the first time. It was many small things: the light on the patch of stone wall at the end of the garden, the bark of the trees, the smell of grass deep in the shade under the branches.

It was early evening and there were moths fluttering and drifting in the early May air, which was already cooler as twilight approached. Charlotte was inside somewhere, probably upstairs seeing the children to bed. He hoped she had also thought of supper. He was surprisingly hungry, considering he had done little all day but enjoy the rare full Saturday at home. That was one of the benefits of having been promoted to Superintendent when Micah Drummond had retired: he had more time. The disadvantages were that he carried far more responsibility and found himself, rather too often for his wishes, behind a desk in Bow Street instead of out investigating.

He settled a little lower in the seat and crossed his legs, smiling without being aware of it. He was dressed in old clothes, suitable for the gardening he had done through the day very casually, now and then.

There was a click as the French doors opened and closed behind him.

It was Gracie, the little waif of a maid they had brought with them, and who was now filled with importance and satisfaction because she had a woman in five days a week to do the heavy scrubbing and the laundry, and a gardener’s boy three days. This fell under the heading of a considerable staff. Pitt’s promotion had been hers as well, and she was immensely proud of it.

“Yes, Gracie,” he said without getting up.

“There’s a gentleman to see you, sir, a Mr. Matthew Desmond….”

Pitt was stunned, motionless for a moment, then he shot to his feet and turned to face her.

“Yes! Yes, certainly you should. Where is he?”

“Right,” he said absently, brushing past her and striding to the doors. He pulled them open and went into the sitting room. It was now filled with the last sunlight and looking oddly golden, in spite of its green and white furnishings. “Thank you,” he added over his shoulder to Gracie. He went into the hall, his heart beating faster and his mouth suddenly dry with anticipation and something not unlike guilt.

He hesitated for a moment, a confusion of memories teeming through his mind and stretching as far back as consciousness would take him. He had grown up in the country, on the Desmond estate, where his father had been gamekeeper. He was an only child, as was Sir Arthur’s son, a year younger than Pitt. And when Matthew Desmond had longed for someone to play with in the huge and beautiful grounds, Sir Arthur had found it natural enough to choose
the gamekeeper’s son. It had been an easy friendship from the beginning, and in time had extended to the schoolroom as well. Sir Arthur had been pleased enough to include a second child and watch his own son’s application improve, with someone to share his lessons and to compete against him.

Even with Pitt’s father’s disgrace when he was unjustly accused of poaching (not on Sir Arthur’s lands, but those of his nearest neighbor), the family were permitted to remain on the estate, with rooms in the servants’ quarters, and Pitt himself had not been denied his continued education while his mother worked in the kitchens.

But it had been fifteen years now since Pitt had been back, and at least ten since he had had any contact with Sir Arthur or Matthew. As he stood in the hallway with his hand on the doorknob, it was not only guilt that stirred in his mind but a sense of foreboding.

He opened the door and went in.

Matthew turned from the mantelshelf, which he had been standing near. He had changed little: he was still tall, lean, almost narrow, with a long, erratic, humorous face, although all the laughter was bleached out of him now and he looked haggard and intensely serious.

Pitt took it and held it firmly, searching Matthew’s face. The signs of grief were so obvious it would have been offensive and ridiculous to pretend not to have seen them.

“What is it?” he asked, sickeningly sure he already knew.

Pitt was completely unprepared for the sense of loss which swept over him. He had not seen Arthur Desmond since before he had married and had children. He had only written letters to mark these events. Now he felt a loneliness, almost as if his roots had been torn away. A past he had taken for granted was suddenly no longer there. He had kept meaning to return. At first it had been a matter of
pride which had kept him away. He would go back when he could show them all that the gamekeeper’s son had achieved success, honor. Of course it had taken far longer than in his innocence he had supposed. As the years passed it had become harder, the distance too difficult to bridge. Now, without warning, it had become impossible.

Matthew tried to smile, at least in acknowledgment, but it was a poor effort. His face still looked haunted.

“Thank you for coming to tell me,” Pitt went on. “That was … very good of you.” It was also far more than he deserved, and he knew it in a flush of shame.