Read The Theory of Everything Online

The Theory of Everything 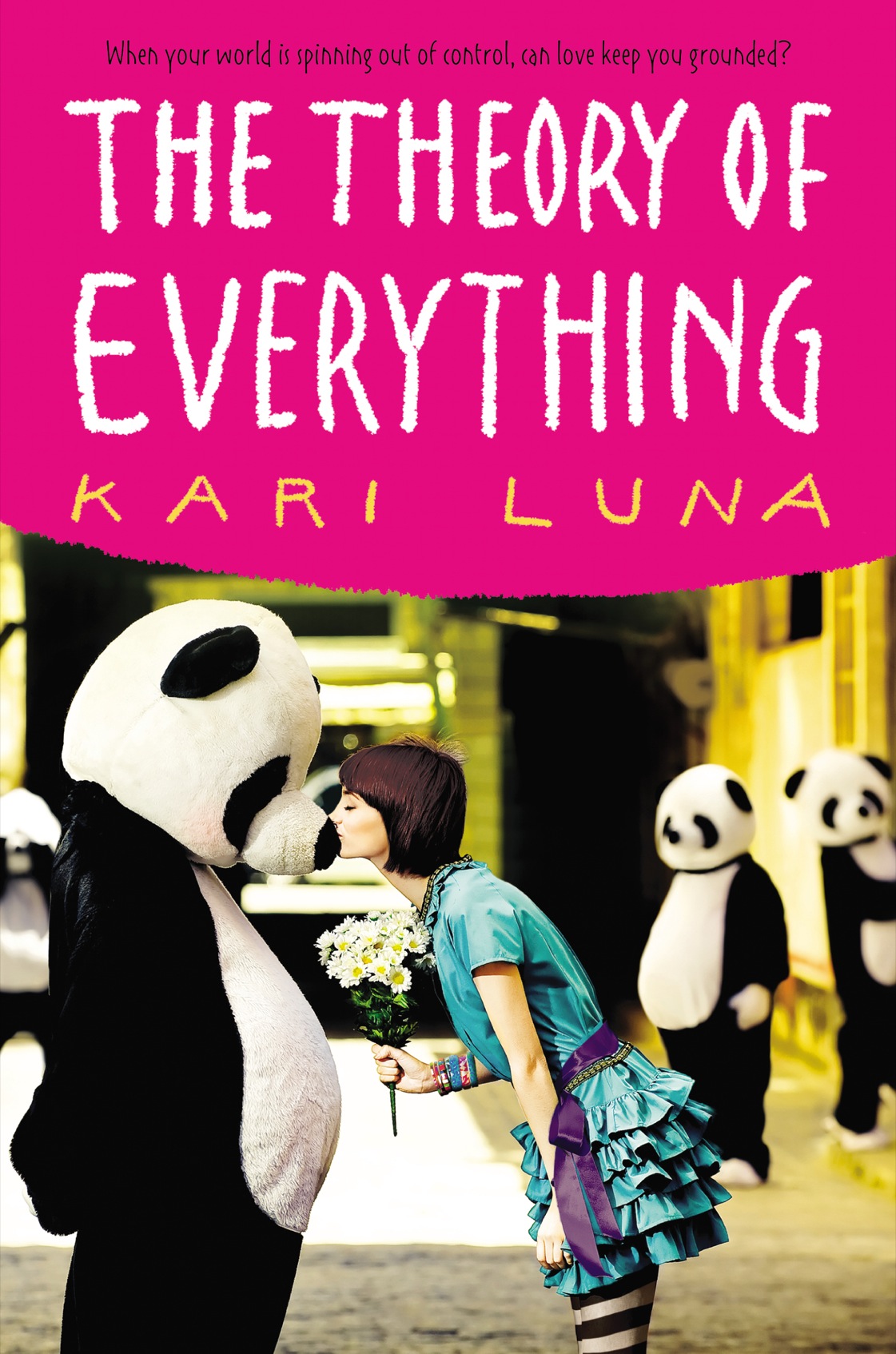 Published by The Penguin Group.

No part of this book may be reproduced, scanned or distributed in any printed or electronic form without permission in writing from the publisher,

Philomel Books, Reg. U.S. Pat & Tm. Off. Please do not participate in or encourage piracy of copyrighted materials in violation of the author's rights. Purchase only authorized editions.

The publisher does not have any control over and does not assume any responsibility for author or third-party websites or their content. Published simultaneously in Canada.

The theory of everything / Kari Luna.

Summary: When fourteen-year-old Sophie Sophia journeys to New York with a scientific boy genius and a giant shaman panda guide, she discovers more about her visions, string theory, and a father who could be the key to an extraordinary life.

To Kai and Noah, who have always believed in everything.

The most beautiful and most profound emotion we can experience is the sensation of the mystical. It is the sower of all true science. He to whom this emotion is a stranger, who can no longer wonder and stand rapt in awe, is as good as dead.

Once I saw a guy's heart roll right off his sleeve. Mom and I were sitting in a booth at Sal's sharing a sausage calzone when I saw itâa big red heart sitting on the outside of his arm instead of the middle of his chest where it belonged. When Mom left for the bathroom, I saw it move, slowly down his biceps until it got to the elbow, rolled off and landed on the floor with a thud. Right next to his bright green sneaker.

The heart stood still. The guy twirled spaghetti on a fork with one hand and gestured excitedly to his date with the other. And she just sat there, sipping soda through a straw and looking totally uninterested in whatever he was saying, which was too bad. Considering the heart and all, it was probably important.

“Cut it out,” Mom said, sliding back into the booth. She had a smear of red-orange lipstick on her teeth. “How would you like to be on a date and have some kid look you over?”

“I'm too young to date,” I said, staring at the floor where the heart had been. “And you might want to blot.”

Normally I would have been mortified by her lack of grooming skills, but I had bigger things to worry about. Things like seeing something that wasn't there. Just like Dad.

“I know you miss New York,” Mom said, leaving her lip print on a white paper napkin. “But San Francisco is the New York of the West, remember?”

It wasn't the New York of the West because people walked too slowly, ate burritos the size of their faces and rode trollies, but whatever. I was less interested in our most recent move and more into the fact that I was maybe, possibly turning into my father.

“How old was Dad when he saw something?” I asked, smearing sauce around the plate with my fork. Wondering if he was twelve like I was.

“You know we don't talk about your father,” she said, tapping her nails against the laminate. Her hands hadn't stopped moving since Dad left. “Let's get out of here.”

She grabbed her coat, slid out of the booth and forged ahead, heels clacking. I lagged behind her until I got to the heart guy's table, where I froze, staring at the heart, which was now back where it belonged: next to the
I
and above the
NY
on his white tourist T-shirt.

“You'll have to excuse my daughter,” Mom said, pulling me away with one hand and pointing at their cheesecake with the other. “She's just mad we didn't order dessert.”

I was mad I saw something no one else did. But more than that, I was mad Dad wasn't there to explain it to me.

The front door chimed as she held it open.

“Come on,” Mom said. “I'd like to get home before Christmas.”

And I'd like to go back to New York, back to when Dad was around, but I doubted either of those things was going to happen.

“Sophie Sophia!” she said, waving me toward the door. Her breath froze in little clouds before her.

“Coming,”
I said, tightening my black-and-white-striped scarf around me. I knew I'd never tell her what happened. But I wishedâdesperately and secretlyâthat it would happen again.

My head is full of magic, baby, and I can't share this with you.

âLove and Rockets, “So Alive”

Most people don't mourn their dads through a mixtape.

Boyfriends, maybe, but then it's usually a playlist. In my world, though, grief was best served analog. Especially when the dad in question bailed when I was ten, leaving only a handful of mixtapes behind. I was a fan of the music, but not him. Four years of returned letters and a total lack of phone calls can do that to a person. It can also make you smarter and emotionally inept at the same time. I could hold my own in a conversation about Depeche Mode but was a total mess when it came to anything else.

“Excited?” Mom said, backing our '87 maroon Volvo station wagon out of the driveway. “You're a sophomore now.”

“Enough with the sarcasm, Soph,” she said, flipping her chocolate hair off her shoulders. She'd been growing it out since we left New York, while I chose to chop mine off, leaving me with a short-bob-with-bangs kind of thing. “It's not like Chicago's devoid of civilization.”

“True, but we're fifty miles north of there,” I said.

“I know,” Mom said, grinning as we passed the
WELCOME TO
H
AVENCREST
sign. “Isn't it great?”

The streets were so wide you could fit an entire New York neighborhood in them, and massive trees hung down like parasols between row after row of Victorian houses.

“This place is one gigantic doily,” I said. “I should have worn white gloves.”

“It might have improved your outfit,” she said, giving me the once-over as we pulled up to a stoplight. “What
are
you wearing, anyway?”

“I'm going for nautical,” I said, twisting the long strand of fake pearls around my neck. “It's in. And these represent the treasure you find while out at sea.”

I was a fan of theme dressing, and today's theme was oceanic: floor-length navy skirt with a large whale pocket on the front, blue-and-white-striped boatneck T-shirt, striped kneesocks and black twelve-eye Doc Martens. It was part sailor, part adventurer, all survivor.

“You look unique,” Mom said, flashing a half smile. “Like your very own person.”

“I actually
like
the way I look,” I said, regretting the snark as soon as it came out. She meant it as a compliment, not the insults I knew were coming the minute I was inside the school.

“Of course you do,” she said, shifting in her seat. “What's not to love? Besides, when have you ever taken fashion advice from me?”

“TouchÃ©,” I said, poking her shoulder. “Do I detect a shoulder pad?”

“You do
not,
” she said, smiling. Mom could be super-annoying like most moms, but at least she was smart, like whip-smart. I guess you had to be if you were married to a physicist.

“This is just a regular work suit, not a power suit from the eighties.”

“Aaaah, the eighties,” I said, caressing the Walkman sitting in my lap. I turned on the radio, but some alterna-teen crap blared out of it, so I changed the station. “I don't know why new bands even bother. Why anyone thinks they can do better than The Smiths or The Cure is beyond me.”

“Some would call it progress,” Mom said. “Like those digital music player thingies?” She glanced at my Walkman like it was offensive.

“They're called iPods,” I said. “Besides, digital is totally overrated. It's not like you can find amazing MP3s at Goodwill.”

“Okay, but what about CDs?” she said.

“Still digital,” I said. “Analog is cool. It has history, like a pair of cuff links or a love letter. Besides, it's your fault. You and Dad got me started.”

“Your father got us both started,” Mom said, waving her arm out the window. The fresh air felt good, like maybe things would be okay. Like maybe moving to a suburb would keep me from seeing things that weren't there. Mom called them “episodes,” just like she did with Dad. And even though the word
hallucination
never crossed her lips, I'm sure it crossed her mind. I know it did mine.

“Angelino made the best mixtapes of anyone I know,” she said. “And now they don't even
make
tapes.”

Neither does Dad, I thought, which meant they were all I had of him. He and Mom fell in love over Echo and the Bunnymen and Joy Division and passed their passion for eighties music on to me. That's why the Walkman was my weapon of choice. You could learn a lot about a person from a ninety-minute Maxell tape.

The car slowed and stopped in front of a sign that read H
AVENCREST
H
IGH
S
CHOOL
. Kids hung out on the steps in pairs or in groups. Singles were nowhere to be seen, because that's what you did when you were alone. Out of sight, out of target practice.

I wasn't ready when Dad left us in New York four years ago. I wasn't ready when I started a new school in San Francisco two years later. I wasn't ready when I saw the heart roll off of the sleeve, records flying around at Record Mania, or Sting serenading me in the soda aisle. I wasn't ready for a mind I couldn't control, a reality that didn't seem real and friends I couldn't keep. No one wanted to bond with the strange girl, including my last school. A suspension was followed by an expulsion and our station wagon, loaded with boxes, picking me up in the middle of the day. I wasn't ready when we headed toward Illinois with Balzac, my Siamese, in my lap, but I made it. So maybe the secret to survival was
not
being ready.

“You know I adore a challenge,” I said, shoving my Walkman and tapes deeper into my bag.

“Then leave the Walkman here,” Mom said. “At least while you're at school.”

“I hate to break it to you, but cassettes aren't what make me weird,” I said. If only it were that easy.

Mom took off her tortoiseshell sunglasses. Her eyes were red and watery, like she was about to lose it. But since she was starting a new job and I had a new school to conquer, we didn't have time for a Hallmark moment.

I walked up the stairs and when I looked back, she waved, tentatively, like even her hand wasn't sure about me going in there.

“Good luck!” she said, even though we both knew it would take a lot more than luck for my episodes to wait until after school.

I took a breath, opened the door and stepped into my new life. Outside, the Volvo sped offâMom fleeing what she couldn't control, me knowing it might follow us wherever we went.