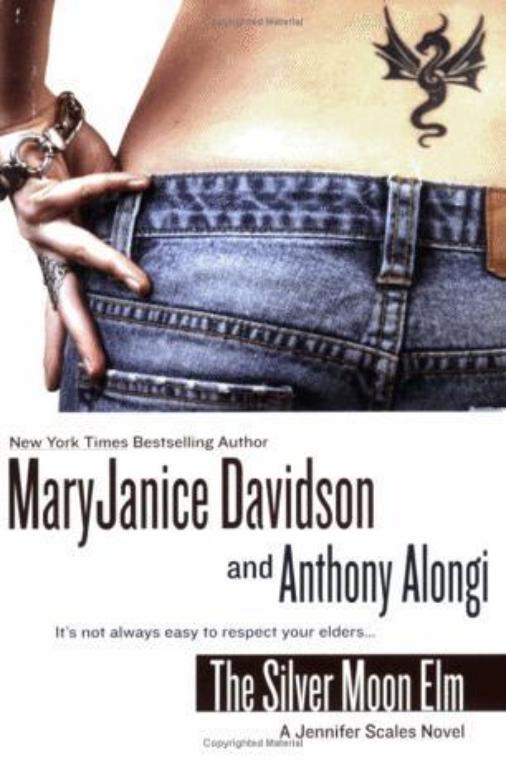 Praise for the novels of
MaryJanice Davidson

“Move over, Buffy, Betsy’s in town and she rocks!…I don’t care what mood you are in, if you open this book you are practically guaranteed to laugh…top-notch humor and a fascinating perspective of the vampire world.”

“One of the funniest, most satisfying series to come along lately. If you’re fans of Sookie Stackhouse and Anita Blake, don’t miss Betsy Taylor. She rocks.”

“Undead and Unwed is an irreverently hilarious, superbly entertaining novel of love, lust, and designer shoes. Betsy Taylor is an unrepentant fiend—about shoes. She is shallow, vain, and immensely entertaining. Her journey from life to death, or the undead, is so amusing I found myself laughing out loud while reading. Between her human friends, vampire allies, and her undead enemies, her first week as the newly undead is never boring… A reading experience that will leave you laughing and ‘dying’ for more from the talented pen of MaryJanice Davidson.”

01 - Jennifer Scales and the Ancient Furnace

02 - Jennifer Scales and the Messenger of Light

Other Titles by MaryJanice Davidson

Dead and Loving It

Sleeping with the Fishes

Dead and Loving It

This is a work of fiction. Names, characters, places, and incidents either are the product of the authors’ imagination or are used fictitiously, and any resemblance to actual persons, living or dead, business establishments, events, or locales is entirely coincidental. The publisher does not have any control over and does not assume any responsibility for author or third-party websites or their content.

No part of this book may be reproduced, scanned, or distributed in any printed or electronic form without permission. Please do not participate in or encourage piracy of copyrighted materials in violation of the authors’ rights. Purchase only authorized editions.

BERKLEY is a registered trademark of Penguin Group (USA) Inc.

The silver moon elm: a Jennifer Scales novel / MaryJanice Davidson and Anthony Alongi.—Berkley JAM trade paperback ed.
p. cm.
Summary: Almost immediately after learning yet another devastating family secret, fifteen-year-old Jennifer awakens in a universe transformed by werearachnid sorcery, in which weredragons are long extinct, and she must try to find a way to change everything back.

For Annie and Jessica,
who make our universe
that much more pleasant to be in.

Lying on her belly and sobbing, Jennifer Scales wanted to die.

The crescent moon slid peacefully through the twilit sky, shedding enough light on her surroundings for Jennifer to lose all hope.

There was no refuge in this forest. The foreign sounds of unknown things filled the air, murmuring a restless siege. She sat up at the gathering noise and tried to collect herself. They were closing in. Maybe a minute left before the end.

Friends? None left. She thought of them all—Susan, Eddie, Catherine, Skip—and a new wave of despair crashed over her with the memory of each one.

Family? Jennifer began to cry again at the thought.

And there was no place else to go.

Her tear-filled gaze went up to the crescent moon. She cursed it under her breath. So much pain had come into her life since she had discovered its power.

She released herself from dragon form, for what she knew would be the last time. Back in the shape of a fifteen-year-old girl, she felt around with her hands for a sharp fragment of stone. Lifting a small, jagged rock in her hand, she thought wistfully of her beautiful daggers. She had lost them. She had lost everything.

Holding the stone firmly in her right hand, she held out her left wrist. She flexed her fingers and watched the blue veins shudder under her starlit skin.

The noises in the forest were closer. She could make out movement in a few of the taller trees. They would be upon her in seconds.

She pressed the sharpest edge of the stone against the skin, saw some blood seep out…and then abruptly stopped. Gritting her teeth, she removed the rock from her wrist and stood up. Not like that, she promised herself. I won’t do it for them.

“Come on!” she screamed out to her predators in the dark. The stone felt fierce in her hand. “Come on!”

She did not see the attack come from behind.

This is almost as good as flying, Jennifer Scales thought to herself ecstatically with gray eyes closed.

The November wind whipped through her shoulder-length platinum blonde hair, good music washed over her numb ears, and the sunlight shone on her reddening cheekbones. It was chilly, to be sure—but she had a sweater, jacket, and scarf to keep most of her warm.

She snuggled farther down in the Ford Mustang convertible’s leather passenger seat and turned to the driver.

“So how often does your grandmother let you use this car?”

The dark olive features of Catherine Brandfire lifted from the attention of the road long enough to flash perfect teeth at her friend. “All the time, when I’m not grounded.”

Catherine laughed. “You know this weekend was an exception. Besides, if I know her at all, Grammie Winona will be more annoyed at you than me!”

Jennifer bit her lip. This much was true. At fifteen years old, she was already a legendary figure among her people, a unifying presence who blended all three dragon races and more. Most weredragons forgave a lot about her—not least the fact she was half beaststalker because of her mother. While beaststalkers were among the sworn enemies of weredragons, Jennifer Scales was an ambassador between the two peoples.

But that didn’t mean everyone in Crescent Valley was going to be happy with what she was doing.

Turning to the backseat and the three friends shivering under several coats and blankets with goofy grins, she lingered over the face of Eddie Blacktooth, her childhood friend and a young beaststalker. Eddie’s sharp nose and soft brown eyes stared back at her, sparrowlike. He smiled at her and she smiled back, thinking of the strange turn of events that had wounded his mother, Wendy, alienated his father, Hank, and led him into the guest room at her own house.

This weekend’s trip to Crescent Valley would be a landmark of sorts—the first time in her people’s memory that a beaststalker had come to the most hidden and sacred of dragon refuges. Winona Brandfire would welcome Eddie, Jennifer knew. After all, it was the eldest dragon who had suggested such contact.

Susan Elmsmith—Jennifer’s best friend, shivering next to Eddie—would probably also get a gracious reception. At least Jennifer hoped so. Susan was neither dragon nor stalker—she was 100 percent American girl, with no additives or preservatives, as the two of them occasionally joked. In any case, Jennifer wouldn’t keep Crescent Valley from her friend—after more than a year of hiding uncomfortable truths, she had resolved there would be no more secrets between them.

Jennifer broke from her reverie, realizing her friend was looking back at her. Oh! “Uh…”

Susan blindly wiped her nose on her own sleeve, which sent her brown curls bouncing around panicked blue irises. “Have I got something on my face?!”

“Yeah, my fingers.” The passenger on Susan’s other side reached over and lightly pinched her nose, causing her to snort and giggle. Jennifer turned all the way around in her seat to flash him an affectionate grin.

It was, she considered, the warmest reception he’d be likely to get for some time. The eldest of all dragons had given no permission for the third visitor her granddaughter and Jennifer were bringing with them. Skip Wilson was a werachnid—another one of the sworn enemies of weredragons, whose oversized spider and scorpion shapes emerged under the same crescent moon as Jennifer and Catherine’s people. Jennifer knew she was taking a chance in bringing Skip to Crescent Valley. She knew some dragons—maybe even Winona Brandfire—would be furious with her.

But she didn’t care. She was sick of secrets, and sick of hiding parts of herself from her friends. Crescent Valley was part of who she was. Skip was her friend—and might have been more, she remembered ruefully, had she been more forthcoming with him in the past.

Full disclosure—the way to go. Weren’t their high school English literature classes full of long, boring examples of characters who would have fared much better had they pursued a policy of honesty? Didn’t modern singers generate hit ballad after hit ballad where a love was lost due to deception? Didn’t movie stars play one forgetful (and eventually regretful) liar after another? As the lyrics or plot always revealed, cover-ups never worked. Secrets were the butt-biting boomerangs of modern pop culture.

Eye of the Raven by Eliot Pattison
The Sorceress by Allison Hobbs
Finding The Soul Bridge (The Soul Fire Saga Book 1) by Zax Vagen
Against the Dawn by Amanda Bonilla
The Dark House by John Sedgwick
River Deep by Rowan Coleman
The Missing Will by Wanda E. Brunstetter
Ghouljaw and Other Stories by Clint Smith
Vampire Love Story by H. T. Night
Daisies in the Canyon by Brown, Carolyn