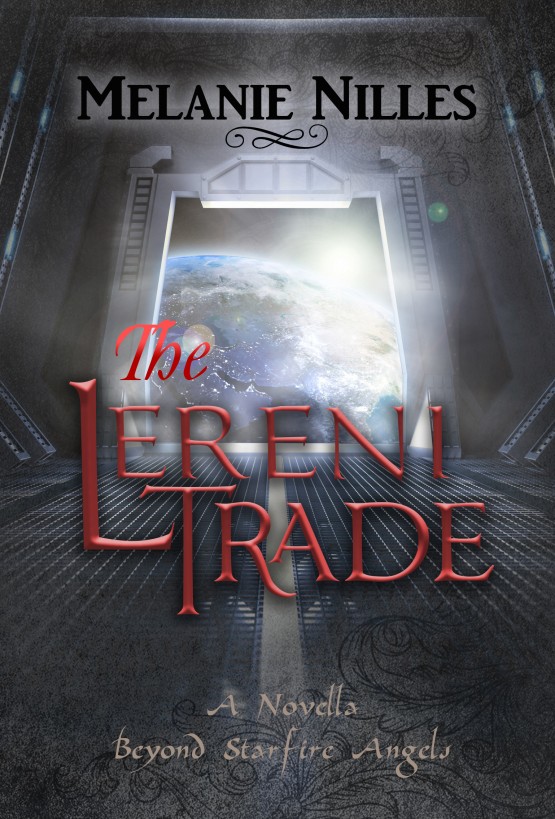 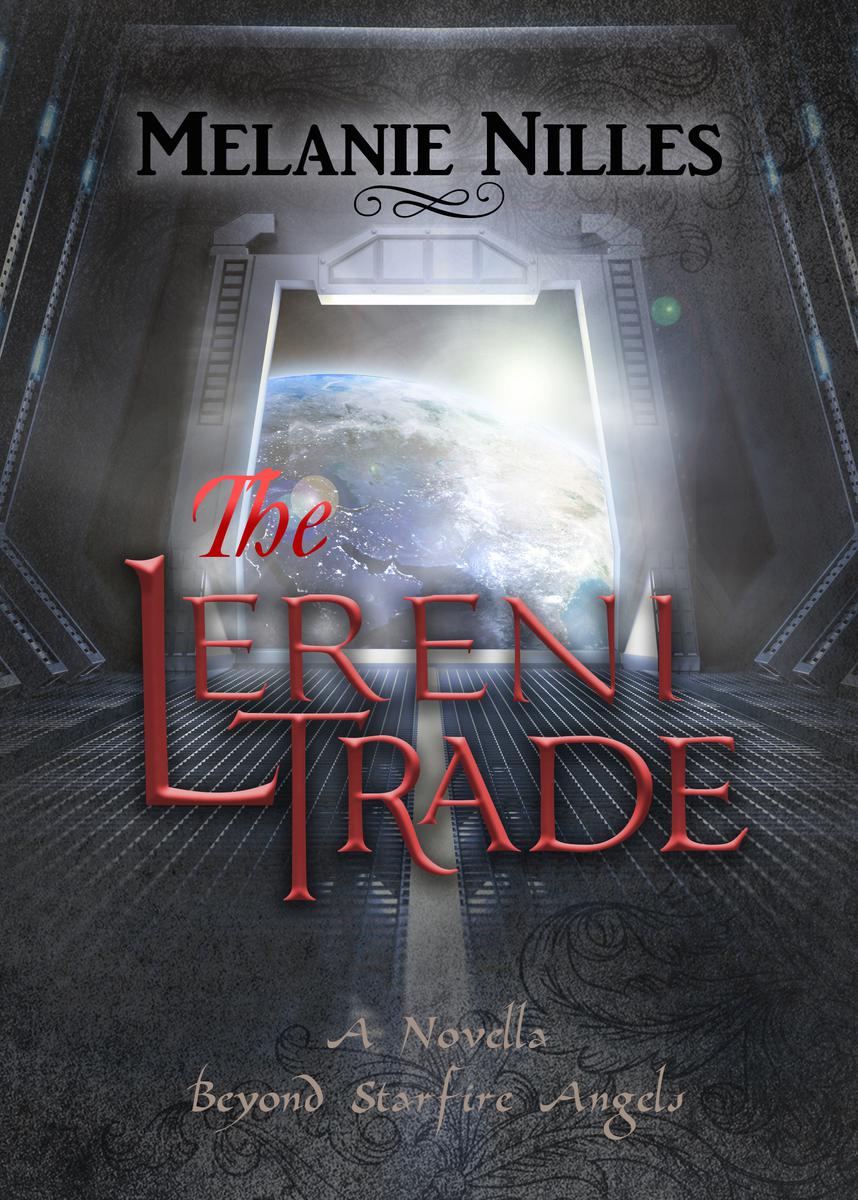 (A Novella Beyond Starfire
Angels)

She grew up disregarded by all and put
her attention into studying, but Krissa longed for friends. In her
lonely life, an alien abduction was the last place she expected to
find them. But it's not by chance that they've found her. Her
Lereni captors have plans for her as an exchange to save their
world from its ruthless conquerors, the Tah'Na. Only her life can
free them, but not even they know why she is worth the freedom of a
whole planet. A possible clue rests on her wrist, a stone bearing a
symbol from another alien race. One Lereni will show her what
friendship means and defy his commander to save her, but they may
all need angelic intervention.

This is a work of fiction. Any
resemblance of characters, locations, events, etc. portrayed in
this ebook are purely coincidence.

The Lereni Trade © 2015 by Melanie
Nilles

Base image ©
Mopic at Dreamstime.com — Earth Seen from Inside a
Space Station

All images, fonts, and other elements
purchased or free for commercial use.

The bitter night condensed each breath
into clouds and turned her throat to burning ice. Quickly they
followed behind her, steps shushing through tall grass growing
louder as they closed in.

Krissa risked a glance back and caught
the two shapes nearly upon her. Loose dark hair blew into her face
and she brushed it aside in time to swerve around a tree and brush
barely visible in moonlight against the dark gray of nighttime
snow.

Under the wash of a half-moon, she
barely made out the footing or contours of snow drifts.

Her toe caught on something bitingly
solid beneath a bank of snow.

The sudden stop to her momentum sent
her sprawling into a frozen bed of leaves and dead grasses. She put
her gloved hands out to break her fall and avoided bruising her
face, but it couldn't spare her the pain that twinged in her
ankle.

At the sound of steps slowing, she
twisted around, wincing from the pain but pulling her legs up to
crab-crawl backwards from their approach.

The two figures dove for her and two
sets of strong arms hoisted her up effortlessly between them.
"Gotcha!"

"You're not gonna tell anyone." The
voice from the taller of the two shadows was sinister.

"I didn't see anything. I have nothing
to tell. I don't know who you are." She'd only been hiding beside
the barn to get out of the party. It hadn't been her idea to be
there, but she'd felt like an unwanted freak. That she had been
there to witness their vandalism was only coincidence.

"Do you know what Dean would do to us
if he found out what we did to his car?"

"No! He won't find out. Really." At
the sharp yank of her hair, she gasped and reached back. Fingers
locked into her hair, unmoving from her desperate attempts to pry
them off.

"No. He won't." The deeper voice of
the two carried a resolute darkness that sent panic through her. He
grabbed her arms and twisted them behind her.

"I didn't see anything. I swear." She
tried to pull free but the pain in her shoulder stopped her.
"Please." She barely choked out the word. "Please. Let me go." Why
had she let her roommates convince her to join them? Why couldn't
they have taken her home earlier when she had asked? None of the
guys wanted anything to do with her; they never had. And all these
two wanted was to hurt her.

Behind her, the other said, "Get it
done. Let's get back to the party. I want to see the look on his
face."

Get what done? Krissa held her breath,
afraid of what might come next and imagining the worst.

In the quiet of the woods, the crunch
of a step to their left froze them all.

It paused and stillness fell once
again.

"Who's there?" the first asked with a
note of threat.

Krissa peered through the gloom but
saw only a vague shadow, but all were shadows in the
trees.

A second later, a blur of movement
sent the man before her sprawling.

He caught himself from hitting his
head and whirled to jump to his feet again. "What—"

Behind her, the steel arms released.
She stepped away and whirled to see him standing with his hands
ready between two dark figures against the faint gray of moonlight
on snow. Where had they come from?

Four shadowy figures surrounded them,
the closest standing over the unconscious form of the first guy.
She hadn't even noticed them attacking him.

A flash of light silenced the
remaining attacker. He crumpled into a pile of snow.

Krissa blinked away dark spots from
the moment of brightness.

"Who are you?" she asked cautiously
and did a full turn to see them all. While stepping away from three
shadows closing in, she bumped into something and spun.

In the wan light of the moon, black
gleamed from a chest too broad for a woman.

Black…Army? Special Forces? What did
they want with her? Were they trying to save her? They hadn't
touched her since knocking out her attackers, or killing them. But
that made little sense, a useless waste of their efforts. Still,
she was relieved for the saving.

They made no move towards her, nor any
sound, but stood like statues. She shivered and tucked her coat
close around her neck.

"Um…Okay…Bye, then." She lifted her
eyes, expecting a helmet for the outline against the
sky.

Eyes flashed with reflected light
inches over her.

Her breath caught in her throat.
Something about the shape of that head wasn't right.

She took a step back, aware of the
others—

A hand whipped out to grasp her
wrist.

Before she could scream, she was
yanked against armor. A second hand covered her mouth. Her heart
pounded in her ears, but when she made an effort to pull away, she
couldn't move.

Not again. This wasn't her
day.

Soft fuzz tickled her nose, blown by
the rapid breath that finally returned through her terror. Tears of
frustration burned in her eyes and she ceased her
struggles.

A whisper of a voice spoke in a
strange language and was answered from nearby—one of the
others.

Slowly, the hand released from her
mouth, leaving her trembling and unable to move even as the warm
armor shifted away. A metallic click came from one of the others,
and her worthless life flashed before her—finding out she'd been
adopted, ridiculed by high school classmates for her weirdness and
intelligence, and clinging to the hope of a college education to
make a life for herself the only way she could, only to have no
true friends even then. No one cared.

But death didn't come. Rather, bodies
closed in around her, the air thickening in their midst, while they
conversed in low voices.

A hand settled firmly on her shoulder
and a voice spoke in a strange language that rose in what sounded
like a question from the one behind her, the one who had muffled
her scream.

The snap of a voice from her left made
her jump. That movement was enough to send pain radiating through
her ankle. She winced and took her weight off but fell backward
into the stranger and what felt like a plate of warm, shaped
metal.

Several more exchanges among the
four.

"Who are you? What do you want?" Were
they military? Why didn't they speak English?

Although she couldn't understand, the
tone of the nearest dark shape had a tenderness that soothed her
questions. In the darkness, the shape shifted down below her. A
second later, arms lifted her.

Krissa blinked and looked up but saw
only a shadow in the dark. Two eyes gleamed briefly, but the
backlight of the moon left the face too dark to make
out.

"Who are you? Why are you doing this?
What do you want from me? Are you trying to help? I wish I could
understand."

One of the others gave a sharp command
and they started moving through the trees. She clutched at the one
carrying her to avoid falling, despite the steady arms about
her.

"Where are you taking me?" Did they
understand anything she said, or were they as uncertain of her as
she was of them?

They said nothing but moved in silence
through the woods. She twisted to see the others around her but
could make out nothing about them in the shadows to which they
stayed.

As a test, she made a small attempt to
push away. A sharp yank of her against the hard shell said her
attempts would not be tolerated. Uncertain what to do, she fell
still, until they reached a clearing from the trees and paused. A
few motions from the hands of the others indicated
caution.

After a whisper from one of them, they
stole through the moonlit clearing.

But Krissa wasn't concerned with
them.

Under the wash of pale moonlight
across the clearing lurked the dark outline of some sort of ship,
but that couldn't be right.

"What is that?" Suspicions haunted her
mind. Impossible.

When they stepped from shadow into the
faint light of the moon, her eyes noticed the hands holding
her—fuzzy hands.

Her breath caught in her throat. She
swallowed her anxieties to lift her eyes.

Although it was dark, she made out
vague features and they weren't quite human.

"Holy…What are you?" She pushed away
with her full strength, but his arms steeled without him breaking
stride.

Afraid of what this meant, she
struggled harder than ever to escape. "Let me go!"

Arms held firm, sparking a greater
determination to escape. She had to flee, find help.

Amid her flopping around, he lowered
her and let her regain her feet.

Perfect. Her chance to act—