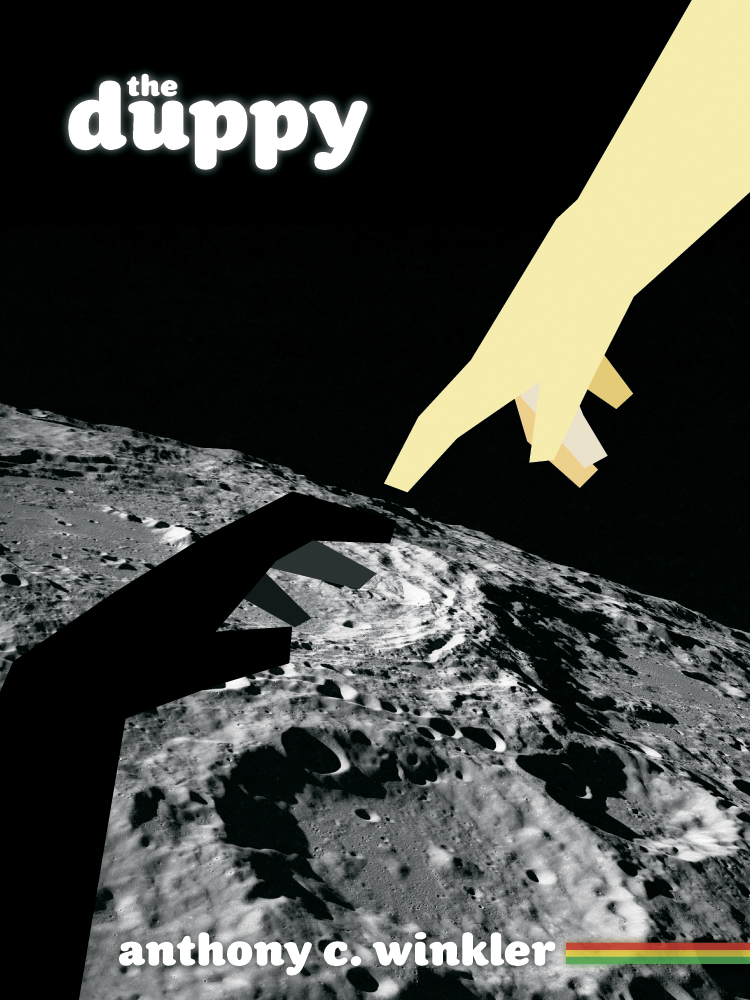 “Winkler applies his wicked sensibility to immigrant experience in Florida … He has a fine ear for patois and dialogue, and a love of language that makes bawdy jokes crackle.”

“A family comedy par excellence, Winkler negotiates the fine line between laughing with and at a character with aplomb … Winkler’s timing is well honed, and this comedy of cultural and generational clashes hits the right notes nearly every time … This is Winkler’s first novel to be published in America, but his reputation as a comic novelist precedes him. With
Dog War
, he more than lives up to it.”

“Dog War
offers an amusing glance at America through an immigrant’s eye, a breezy treat to keep you company on the beach at Montego Bay or, perhaps, your local dog park.”

“Dog War
has its laugh-out-loud moments, for it is sweetened by Jamaican-patois dialogue from Winkler’s homeland and wry, tongue-in-cheek narration … [A] delicious comedy of manners.”

“Winkler paves every step with delicious laugh-out-loud prose that offers a wide-angled view of Jamaica’s culture.”

“Dog War
is a delightful satire of Jamaican, and, especially, American life, as funny as a Donald E. Westlake crime caper and as outrageous as John Collier’s
His Monkey Wife.”

“An acclaimed comic novelist in his native Jamaica, Winkler makes a long overdue American debut with this laugh riot … Winkler’s wit, his ear for dialect, and the sublime creation that is Precious add up to one howlingly funny book.”

“When was the last time you laughed out loud at a book, and I mean the hold-your-sides, near-hysterical-with-joy kind of laughter?
Dog War
is a pitch-perfect and truly uplifting read, wonderfully written with a flourish and an art that is like the best conversation. Winkler is the Prozac of literature, the true feel-good factor we seek in Oprah and the likes. You want to help somebody? … Give them
Dog War,
they’ll be forever in your debt.”

—Ken Bruen, author of
The Guards

Critical Praise for
The Lunatic

“By far the funniest book I’ve read in a decade, although its ribald atmosphere is sprayed with the pepper-gas of aggressive social satire.”

“The Lunatic
is a small masterpiece and should not be missed.”

“Hilarious, bawdy, vivid, and insightful … Winkler is unequivocally unafraid … and can ask the big questions without becoming tiresome.”

“The Lunatic
is beautiful and insane and unlike any other in its comedy of character and idea, landscape and language; a sensibility that jostles the senses.” 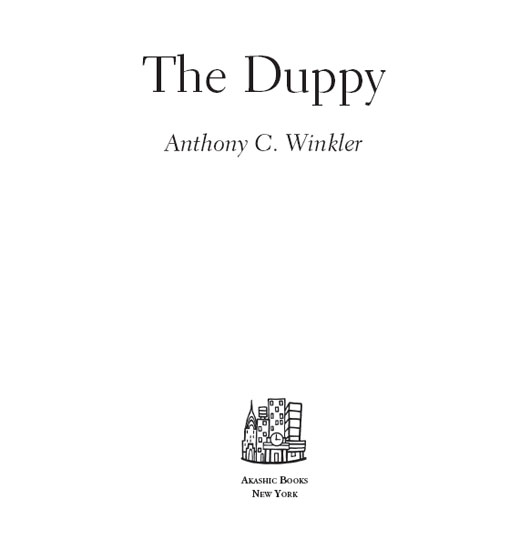 This is a work of fiction. All names, characters, places, and incidents are the product of the author’s imagination. Any resemblance to real events or persons, living or dead, is entirely coincidental.

For Vicky Kenmay.
We all miss you, darlin’.

One Saturday morning, not very long ago, I dropped dead and turned into a duppy.

Some finicky members of the book-buying public will no doubt challenge this opening. (I welcome this opposition.)

They will gripe, as a friend of mine did when I showed him this first page, “Baps, you expect me to pay hard-earned money for a book whose writer dead in de opening sentence? If de writer dead in de beginning, who write de book? Duppy?”

Being dead is most definitely an impediment to writing a book—under ordinary circumstances. Proof that death is a challenging obstacle to a literary career is to be found in the fact-that, to the best of my knowledge, there is not a single case of Jamaican duppy ever publishing a book on the island. Not-one.

Moreover, as everyone knows, the common pastime of a Jamaican duppy—to romp on the naked bellies of sleeping church sisters—is an entirely frivolous one that requires no formal schooling, literacy, or intellectual skills. Indeed, it is widely believed, and I myself believe it, that Jamaican duppy is illiterate, no free places in the schools ever having been set aside by successive governments for education of the substantial duppy population known to roam the island.

The pertinent point is, if the writer is dead in sentence one and duppy is an ignoramus who can’t even recite his ABC’s, how came this book to be written?

All these questions, and sundry others, will be fully addressed and answered in the coming pages.

For now, I beg the reader just to grant me this: One Saturday morning, not very long ago, I did drop dead. And I definitely turned into a duppy.

My name is Taddeus Augustus Baps. I was born in Kingston, the only child of a decent working-class family. At the time of my death I owned three country shops, although strictly speaking I had been trained to be a teacher and had taught in the secondary schools for some ten years until dire poverty compelled me to take up a more commercial livelihood.

I started out small, buying my first country shop from a retired gentleman who was migrating to Canada to join his grown children. A few years later I expanded to a second shop and then to a third.

On the morning of my death, I had woken early and shuffled through the dawn dimness cobwebbing the hallways of my Kingston house, intending to go over my accounts.

I sat on a hassock in the drawing room and did the books while the usual nightly gabble of dog bark over the neighborhood was quieting down along with the throbbing of distant sound systems.

Except for the scratching of my pencil and the sounds of a rooster gargling dew in the dawn light, the morning was peaceful.

I was carefully writing down a naught when I felt a vicious tearing inside my chest like a crab had squeezed behind my breastbone and was ripping my heart out with its claws. My breath was abruptly stopped up. I scratched at my chest and moaned with a wicked pain.

Before I could even bawl out a common Jamaican shopkeeping phrase such as, “Stop, thief!” I toppled off my chair and hit the floor with a loud crash that rattled my house down to its very foundations.

I was only forty-seven years old.

I was also stone dead.

But I did not immediately realize that I was dead.

That is the strange thing about turning duppy: at first you don’t know it. Your duppy floats out of your dead body and you look around and think, “Boy, dis is funny! I slip and drop on de ground, but I feel better now!”

So it was with me. Indeed, when my duppy got up off the floor, I felt a little giddy but thought that I was still in the land of the living.

I looked around the room and tried to grasp what was happening when I noticed that the exercise book in which I kept my accounts had flown out of my hands and landed in a corner and the pencil had dropped beside the hassock and rolled under the chair.

As I am a man who hates untidiness, I got down on my hands and knees to pick up the exercise book and discovered, to my shock, that I couldn’t grab hold of it, that my hands suddenly seemed made of wisps. Every time I grabbed at the book, it slipped through the mist of my fingers.

Next I tried picking up the pencil and found that my fingers passed right through the shaft. Perplexed, I thought to call Mabel, my new maid, and beg her boil a cup of strong breakfast tea to clear my head.

I had just opened my mouth to bawl out Mabel’s name when I glimpsed something funny in my drawing room. I couldn’t tell what it was at first because of the fuzzy morning light, but as I drew closer, I saw that it was the body of a heavy-set black man lying crumpled on the floor.

What was this? I indignantly asked myself. Had some ole negar come and dead in my drawing room at this early hour without asking permission?

I was about to kick the brute and tell him to get up and go dead on government road when I realized—to my horror—the ole negar dead on the floor was none other than me, Taddeus Baps.

I started one unearthly piece of wailing. I bawled out loud:

“De ole negar dead on de floor is me! Lawd, Jesus, I dead and turn duppy! And I wasn’t even sick! Now me dead!”

Then I flew into a temper, for I am not a man who yields lightly to life’s obstacles.

Who said I should dead now? I asked myself angrily. I was only forty-seven years old! I certainly wasn’t going to dead without a fight!

Getting down on my knees, I tried to ram my duppy body back inside my carcass.

But my own earthly body had become a wall that my duppy couldn’t penetrate. My duppy hand bounced off the fleshy limb. Duppy foot wouldn’t slide into real foot. Trying to stuff my duppy head back inside my skull was like bucking against a rusty engine block.

I stood up and started my bawling all over again. I cussed bad words and popped wicked oaths and swore that I wasn’t leaving my body behind for worms to eat.

But all my wailing and cussing didn’t make the slightest difference.

As you will find out for yourself one day, once your time has come to dead and turn duppy, no amount of bawling can bring you back.

In the dimness of the Kingston dawn, I was standing confused in my sparsely furnished drawing room trying to decide what to do now that I was a duppy instead of an enumerated voter when I heard a scuffling noise coming from the hallway and my maid, Mabel, calling, “Mr. Baps! Mr. Baps!”

I cocked my ear to listen for an answer but heard only the shrill thread of a rooster’s crowing unreeling in the blurry light.

A few seconds later Mabel renewed her bleating. She shuffled into the doorway, poked her head cautiously around the doorjamb, and squinted into the dim room.

I yelled back, “Yes! And dead because of you! If I told you once I told you a hundred times, don’t cook wid de blessed coconut oil dat so full of cholesterol! But you wouldn’t listen! And now because you so hard o’ hearing, you bad oil kill me off in me own drawing room!”

I was going to add that perhaps the whole thing was a mistake, a dreadful nightmare, but I kept this encouraging thought to myself because I have always frowned on open familiarity between employer and domestic unless the domestic’s drawers were down and she was wriggling underneath her employer, in which case some familiarity and sweetmouthing were clearly warranted.

Before I could say another word, however, Mabel had scampered screaming down the hallway, her frantic footsteps rumbling through the wooden house, making the walls tremble.