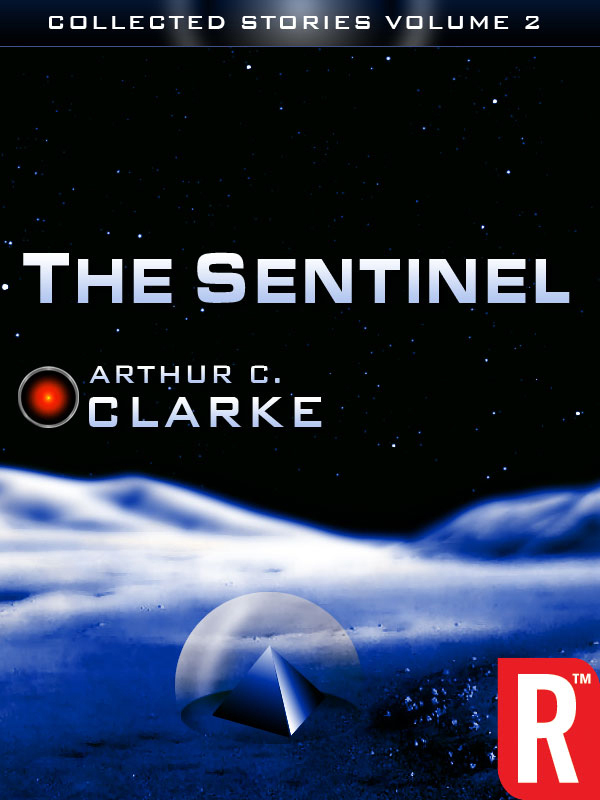 Cover art to the electronic edition copyright © 2012 by RosettaBooks, LLC.

All rights reserved. No part of this book may be used or reproduced in any form or by any electronic or mechanical means, including information storage and retrieval systems, without permission in writing from the publisher, except by a reviewer who may quote brief passages in a review.

Holiday On the Moon

All the Time in the World

The Nine Billion Names of God

Encounter In the Dawn

By the time he was writing the stories in the span of this collection, most of them falling within the early 1950’s, Clarke had established himself as the leading British science fiction writer and perhaps the major figure to emerge in that period between the conclusion of the “Golden Age”
Astounding
(1945) and the piling-into-print of the new generation associated primarily with Horace Gold’s emergent
Galaxy
. The most famous story in this second volume, of course, is “The Sentinel” which is the Kubrick film (screenplay by Kubrick and Clarke) in its nascent form but that fame occurred only through a kind of indirection, and the story never found a wide audience other than as a curiosity. “The Nine Billion Names of God”, on the other hand, which appeared in Star Science Fiction 1, the first volume of the first science fiction original series, is famous on its own terms and embodies the originality and the strength of Clarke as noted in the Introduction to the first volume. It is both practical and mystical; it fuses (in Samuel R. Delany’s line long ago) “the desperate and the human with the disparate and the technological” in a way which has always been unique to our genre. The iron, implacable computer is juxtaposed here with the most ancient and resonant of religious mysteries; the monks at their keyboards are a quality of experience imagined here but not to be experienced for decades… and the conclusion is both completely logical and completely mad. As Damon Knight wrote of Henry Kuttner, from deep inside this horrifying story one can distantly hear the distant whoop of its author’s laughter.

The story, so exemplary of the cold polish and hot speculation which identify Clarke, had an impact from its first publication (the early volumes of Pohl’s Star Series were as admired and influential as the concurrent
Galaxy Magazine
of Horace Gold) and although certain components might seem vaguely distant (and could easily be shifted to the present) the story is chillingly contemporary. Clarke’s short story “The Star” (coming in the third volume) was even better known and won only the third short story Hugo…and in tandem with “The Nine Billion Names of God” it marks the author as one of the very few in literary history who have written more than one absolutely memorable, timeless short stories, the kind of stories like “The Monkey’s Paw” or “His Monkey Wife”, “The Country Husband” or “The Cold Equations simply roll on, indifferent to time, creating their audience and urgency for every succeeding generation.

The marketing history of “The Sentinel” is one which, I have long argued, is of a nature “to give every hack hope”. The Scott Meredith Agency (Clarke’s American agents from the start of his career in 1946) marketing record is deeply instructive: the story was offered to every extant science fiction and fantasy market, declined everywhere, finally sold to the Donald Wollheim edited
Ten Story Fantasy
…a one-time magazine published by Avon, Wollheim’s employer in 1950. Clarke received $25. It was decades before the story was collected or anthologized; purportedly Kubrick asked Clarke in the mid-sixties if Clarke had anything which might be the basis of a movie script and “The Sentinel” was one of a number of stories offered Kubrick. The world now knows that Philip K. Dick’s “Minority Report” whose film rights were sold for 1.8 million dollars began life as a multi-reject, published for a penny a word in the bottom magazine Fantastic Universe, but the odyssey of “The Sentinel” might be even more tortuous and its eventual destiny even more bewildering.

Among many science fiction marketing mysteries is this: Why did Clarke, so clearly a major writer, appear in the leading magazines of the 50’s so infrequently?
Astounding
published nothing of his between “Hide and Seek” in 1949 and “Death And The Senator” in 1961;
Galaxy’s
offshoot, the
Galaxy Novels
, published
Prelude To Space
but Horace Gold paid his short stories very little attention.

I can’t speculate on Gold—Horace was impenetrable to even his favorite contributors—but I have a theory on Campbell; in 1947 Clarke’s “Inheritance” appeared in
Astounding
and, subsequently it was revealed that it had appeared months earlier in a British publication. Campbell never published material not original to his magazine; in 1954 and again in 1965 it happened inadvertently when a novel appeared from its book publisher before the serialization in
Astounding
had been completed. (Campbell was infuriated with Scott Meredith both times.) Maybe Campbell enacted what was in his mind a holy retribution. “So much of our field is buried in apocrypha” A.J. Budrys wrote. Perhaps this is only more.

First published in
10 Story Fantasy
, Spring 1951, as ‘Sentinel of Eternity’

Collected in
Expedition to Earth

‘The Sentinel’ was written over Christmas 1948 for a BBC competition. (It wasn’t even placed—I have often wondered what
did
win). I am amused to see that I put the exploration of the
Mare Crisium
in ‘the late summer of 1996’. Well, we missed that date, but I hope we’ll get there early in the next century. This is the starting point of
2001: A Space Odyssey
.

The next time you see the full Moon high in the south, look carefully at its right-hand edge and let your eye travel upwards along the curve of the disc. Round about two o’clock, you will notice a small, dark oval: anyone with normal eyesight can find it quite easily. It is the great walled plain, one of the finest on the Moon, known as the Mare Crisium—the Sea of Crises. Three hundred miles in diameter—and almost completely surrounded by a ring of magnificent mountains, it had never been explored until we entered it in the late summer of 1996.

Our expedition was a large one. We had two heavy freighters which had flown our supplies and equipment from the main lunar base in the Mare Serenitatis, five hundred miles away. There were also three small rockets which were intended for short-range transport over regions which our surface vehicles could not cross. Luckily, most of the Mare Crisium is very flat. There are none of the great crevasses so common and so dangerous elsewhere, and very few craters or mountains of any size. As far as we could tell, our powerful caterpillar tractors would have no difficulty in taking us wherever we wished.

I was geologist—or selenologist, if you want to be pedantic—in charge of the group exploring the southern region of the Mare. We had crossed a hundred miles of it in a week, skirting the foothills of the mountains along the shore of what was once the ancient sea, some thousand million years before. When life was beginning on Earth, it was already dying here. The waters were retreating down the flanks of those stupendous cliffs, retreating into the empty heart of the Moon. Over the land which we were crossing, the tideless ocean had once been half a mile deep and now the only trace of moisture was the hoar frost one could sometimes find in caves which the searing sunlight never penetrated.

We had begun our journey early in the slow lunar dawn, and still had almost a week of Earth-time before nightfall. Half a dozen times a day we would leave our vehicle and go outside in the spacesuits to hunt for interesting minerals, or to place markers for the guidance of future travellers. It was an uneventful routine. There is nothing hazardous or even particularly exciting about lunar exploration. We could live comfortably for a month in our pressurised tractors, and if we ran into trouble we could always radio for help and sit tight until one of the spaceships came to our rescue. When that happened there was always a frightful outcry about the waste of rocket fuel, so a tractor sent out an SOS only in a real emergency.

I said just now that there was nothing exciting about lunar exploration, but of course that is not true. One could never grow tired of those incredible mountains, so much more rugged than the gentle hills of Earth. We never knew, as we rounded the capes and promontories of that vanished sea, what new splendours would be revealed to us. The whole southern curve of the Mare Crisium is a vast delta where a score of rivers had once found their way into the ocean, fed perhaps by the torrential rains that must have lashed the mountains in the brief volcanic age when the moon was young. Each of these ancient valleys was an invitation, challenging us to climb into the unknown uplands beyond. But we had a hundred miles still to cover, and could only look longingly at the heights which others must scale.

We kept Earth-time aboard the tractor, and precisely at 22.00 hours the final radio message would be sent out to base and we could close down for the day. Outside, the rocks would still be burning beneath the almost vertical sun, but to us it was night until we awoke again eight hours later. Then one of us would prepare breakfast, there would be a great buzzing of electric shavers and someone would switch on the short-wave radio from Earth. Indeed, when the smell of frying bacon began to fill the cabin, it was sometimes hard to believe that we were not back on our own world—everything was so normal and homely, apart from the feeling of decreased weight and the unnatural slowness with which objects fell.

It was my turn to prepare breakfast in the corner of the main cabin that served as a galley. I can remember that moment quite vividly after all these years, for the radio had just played one of my favourite melodies, the old Welsh air, ‘David of the White Rock’. Our driver was already outside in his spacesuit, inspecting our caterpillar treads. My assistant, Louis Garnett, was up forward in the control position, making some belated entries in yesterday’s log.

As I stood by the frying-pan, waiting, like any terrestrial housewife, for the sausages to brown, I let my gaze wander idly over the mountain walls which covered the whole of the southern horizon, marching out of sight to the east and west below the curve of the Moon. They seemed only a mile or two from the tractor, but I knew that the nearest was twenty miles away. On the Moon, of course, there is no loss of detail with distance—none of that almost imperceptible haziness which softens and sometimes transfigures all far-off things on Earth.