Read The Chronicles of Elantra 5 - Cast in Silence Online

The Chronicles of Elantra 5 - Cast in Silence 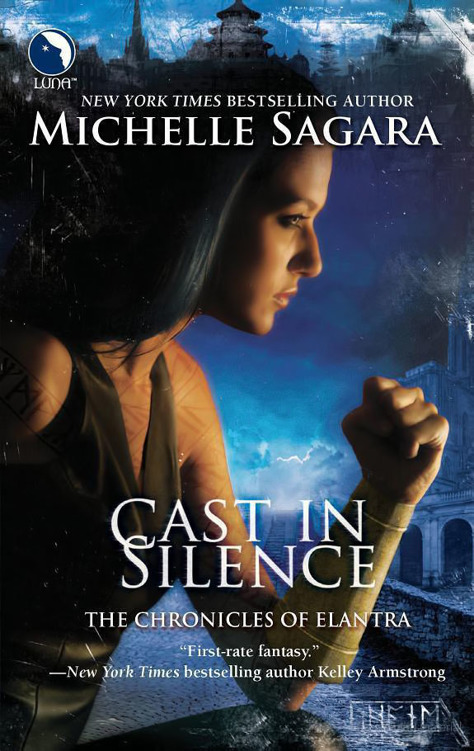 and
THE CHRONICLES OF ELANTRA series

“No one provides an emotional payoff like Michelle Sagara. Combine that with a fast-paced police procedural, deadly magics, five very different races and a wickedly dry sense of humor—well, it doesn’t get any better than this.”

—Bestselling author Tanya Huff on The Chronicles of Elantra series

“First-rate fantasy. Sagara’s complex characterizations and rich world-building lift her above the crowd.”

—
In the Library Reviews
on
Cast in Shadow

“Readers will embrace this compelling, strong-willed heroine with her often sarcastic voice.”

—
Publishers Weekly
on
Cast in Courtlight

“The impressively detailed setting and the book’s spirited heroine are sure to charm romance readers as well as fantasy fans who like some mystery with their magic.”

—
Publishers Weekly
on
Cast in Secret

“Along with the exquisitely detailed world-building, Sagara’s character development is mesmerizing. She expertly breathes life into a stubborn yet evolving heroine. A true master of her craft!”

THE CHRONICLES OF ELANTRA series

One of the best things—for me—about writing fantasy is that a writer can enlarge issues that people face on a daily basis by making the stakes higher; it’s not often that you can cause the end of the world in real life because of choices you’ve made. But the end-of-the-world feeling is a very real dread day to day. The consequences are always bigger, but the emotional response is rooted in a writer’s experience, and our experiences don’t actually include dark gods, primal chaos and perfect immortals. Except maybe when we’re sleeping.

Kaylin Neya started life on the page as a Private in the arm of law enforcement know as The Hawks—her city’s version of a cop. But, as is so often the case, her known life started before that, and what there was of it was buried in the organizational nightmare I often refer to as my notes. Some of that past came to light in her first outing,
Cast in Shadow,
because a lot of her story makes no sense without it.

She doesn’t live in the past, although she will always be affected by it, and she’s managed to keep a lid on it—until now.
Cast in Silence
is about the missing six months of her life, between her life in the fief of Nightshade and her life as a Hawk. To say she’s ambivalent about those six months would be a bit of an understatement.

But to me, it echoes a lot of ambivalence about choices we made for various reasons when we were younger or less experienced. Or at least choices I made. If you’re returning to Kaylin and Elantra, I hope you enjoy reading the book as much as I did writing it.

This is for Ayami, the sister-in-law
who makes having a brother a blessing.

Living with a writer is not easy. My children are probably used to it because it’s all they’ve ever known, but my husband, Thomas, had a sane and reasonable upbringing, and still manages to create the space in which I do write, day in and day out. He and Terry Pearson form my alpha reader team, and are brave enough to argue with me when reading raw first draft (and I mean raw).

If living with a writer is not easy, it’s my suspicion that working with a writer is often just as fraught, so I am deeply grateful to Mary-Theresa Hussey, who has been the very model of patience and understanding, and who continues to provide a home for Elantra. And to Kathleen Oudit and the art staff for the fabulous job they continue to do when creating covers for these books. If writing a novel is a solitary endeavor,
publishing
a novel is teamwork, and I have been blessed with a great team.

“It’s eight o’clock in the morning. Please remember to fill out your reports and hand in your paperwork.” Had the cheerful and musical voice belonged to a person who could be easily strangled, it would have stopped in midsentence.

Sadly, it was the melodious voice of the streetside window which interrupted the bustling and vastly less perky office in which the branch of Law known as the Hawks was based. That window, which had been installed complete with a magical, time-telling voice in some misguided attempt at humor, had been adjusted in the past couple of weeks by Acting Sergeant Mallory, and no one who had to work where they could hear it—and were prevented by office regulations from destroying it—considered the adjustments to be an improvement.

Sergeant Marcus Kassan, the large and currently bristling Leontine behind the central desk in the Hawks’ Office raised his fist and flexed his fingers. Long claws, gleaming in the sun’s light, appeared from beneath his golden fur. He had not yet shattered the window—and given it was installed with the guidance of Imperial Mages, that would have been damn hard—but he looked like he was on the edge of finally doing it in. The betting pool had not yet been won, but at least three people were out money, Private Kaylin Neya being one. The office had discovered, however, that the windows couldn’t be scratched, and Kaylin had argued vociferously that this should have counted as a victory condition. She’d lost.

Then again, Leontines were generally all about the clawing, biting, rending, and ripping out of throats; they weren’t as good with smashing things.

Kaylin’s personal favorite was the new end-of-day message, wherein the cheerful voice of the window told the departing staff that they were to be in the office at 7:00 a.m., and they were to be shaved, where shaving was appropriate, and otherwise clean. She was less keen on the last bit, in which the Hawks were reminded to check the duty roster for last-minute adjustments.

“Why doesn’t he just have the mages shut it down?” she asked Caitlin, as Marcus drove new furrows into his desk.

“I think he considers it a reminder of the differences between Sergeant Mallory’s temporary tenure and his more permanent record,” Caitlin replied. The reply, like the question that engendered it, was very, very quiet. This didn’t guarantee that it couldn’t be overheard, but unless Marcus had it in for you, he was capable of a bit of selective deafness. If he hadn’t been, his office would be half manned for at least an entire duty cycle, and the half that was left alive would be too busy cleaning up to cause trouble.

“Neya!” Given Marcus’s current mood, the fact that there had been no bloodshed was pushing the goodwill of whatever gods watched over underslept and underpaid police. “You’re due out on beat in five minutes. Stop bothering Caitlin and hit the street.”

Kaylin’s beat was Elani Street and its surroundings, and her partner was—as it so frequently was, these days—Corporal Severn Handred. He was already kitted out and ready to go when she careened down the hall to the locker room. He raised an eyebrow, one bisected by a slender scar, while he watched her use the wall as a brake.

“Not yet. It’s hard to be late when the window is nagging.”

She grimaced. “Marcus took his claws to it yesterday.”

“I think that should count.”

“Is the window still in one piece? Then it doesn’t count.” Severn was at the top of the betting pool at the moment, and looked to be secure in his position, but they’d both grown up on some pretty mean streets, and “secure” meant something different to them.

This was probably why they got along so well with the Barrani Hawks. The Barrani were noted for their love of the political. Political, in the context of their race, usually involved assassination, both literally and figuratively, and smallish wars. They understood that anything they owned had to be held against all comers. Those who held less were perfectly willing to test the definition of “secure,” often to the breaking point.

Of course, unless one of those assassination attempts was lucky, the Barrani weren’t about to expire of old age; they didn’t. Age, that is. They had long memories, and they could easily hold a grudge for longer than Kaylin’s whole life; at least two of them did. On the other hand, they made immortality look like one long gripe fest, admittedly with killer clothing, so it was hard to begrudge them their eternity of suffering. Or of making everyone else they knew suffer. Kaylin, as a human, would eventually clock out, which would in theory earn her some peace.

She dressed quickly, straightening out the cloth and under-padding that had managed to crumple in the wrong places the way it always did, and then rearranged her hair so it was pulled tight and off her face. It wasn’t immortality that she envied the Barrani; it was their damn hair. It never got in the way of anything.

She made it out of the locker room with seconds to spare; Severn caught her by the shoulder and adjusted the stick that held her hair tightly in place so that it actually did the job.

Elani Street was, of course, Charlatan Central. It was also, unfortunately, where real magic could be found if you didn’t have access to the Imperial Mages, or worse, the mages of the Arcanum, which access pretty much described ninety-nine percent of the city of Elantra. Kaylin had never understood how it was that people capable of genuine enchantments were willing to hunker down with total frauds.

The end result, however, of some fraud was ire, and the end result of ire, if not checked, was directly the purview of the Hawks. It was more colloquially called murder. It didn’t happen in Elani often, because even if you were
almost
certain the so-called magic you’d purchased was a lump of rock, you couldn’t be as easily certain that the person who’d sold it to you was incapable of something more substantial.

There were, however, no murders on the books today. Or at least not murders that Kaylin knew about, and therefore not murders that she would be called in to investigate. She’d wanted a few weeks of quiet, and she’d had them. For some reason, it hadn’t improved her mood.

Severn noticed. Then again, it was hard not to notice. While he frequently walked streetside, Kaylin’s accidental mishaps with merchant boards now numbered four.

“Kaylin.” He stepped to her left, and took up patrol position merchant-side.

She couldn’t bring herself to say it was accidental, although she did try. But the boards that promised to find you your One True Love were a particular sore spot for Kaylin, in part because it was impossible to walk past the damn things at
any
time of day, and not see people waiting in the storefront, behind glass. Some had the brains to look ill-at-ease, but if they had the brains, they clearly lacked self-control; some just looked desperate and flaky.

All of them would be disappointed.

“You know they piss me off,” she muttered.

“On the wrong day, sunlight pisses you off.”

“Only in the morning.”