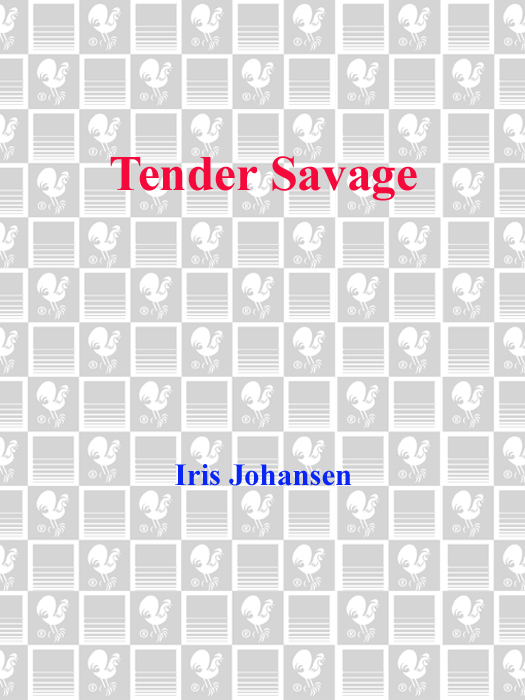 Freedom fighters have always fascinated me. There is something grand and heroic about struggling to overcome tyranny. I suppose that’s why I traveled to all the sites of our own revolutionary war. It was almost inevitable that I created a story about Ricardo Lázaro, a poet-warrior who was fighting his own battles on the island of Saint Pierre.

The tale of Lara Clavel and Ricardo is romantic and passionate and brimming with adventure but there are still elements of that idealistic search for freedom and a better way of life. It made it more interesting for me that their passion was not only for each other but the liberation of Saint Pierre.

So let Lara and Ricardo take you away to their world where all revolutions are just and lovers can still live happily ever after.

“Iris Johansen is a powerful writer.”

“[Iris Johansen is] one of the romance genre’s finest treasures.”

“A master among master storytellers.”

“Johansen serves up a diverting romance and plot twists worthy of a mystery novel.”

“[Iris] Johansen has … a magical quality.”

“[Johansen is] a consummate artist who wields her pen with extraordinary power and grace.”

“Iris Johansen is a bestselling author for the best reason—she’s a wonderful storyteller.”

“I
T WILL BE
dangerous, Miss Clavel,” Paco said gravely. “I won’t lie to you. You could be raped or tortured, even killed.”

Lara Clavel tried to hide her shiver of fear from Paco Renalto’s keen gaze. In the short time she had been in the major’s tent, she had learned that there was a great deal more to Renalto than elfin features and an air of insouciance. He had a sharp, probing intelligence. She shouldn’t have been surprised. He couldn’t have risen to be
Ricardo Lázaro’s second in command with only puckish charm to recommend him. She forced a smile. “I really wish you wouldn’t tell me about all these dire things that could happen. I’m scared enough already.”

“You have to be warned. Ricardo wouldn’t permit you to go into such a dangerous situation without your knowing full well what it might cost you. I can’t either.”

“Not even to save the leader of your great revolution?” Lara’s tone was deliberately flippant.

“Not even then.” A sudden smile lit Paco Renalto’s face. “You cannot choose without knowing the facts, and that’s what this revolution is all about. Ricardo wouldn’t thank me for discarding those principles just to save his life.”

“No? I find that hard to believe. Self-preservation is the first law of nature.”

“Some things are worth dying for.” Paco paused. “And so are some people. I’d give my life for Ricardo Lázaro.”

And so would a hundred thousand other revolutionaries on this blasted island in the Caribbean, Lara thought wearily. The man seemed
capable of hypnotizing everyone who came in contact with him. Lázaro was not only a brilliant military strategist, but the most charismatic of leaders, and the war he had waged against the Communist junta on Saint Pierre had made headlines around the world for the last nine years. It wasn’t often a figure as dashing as Lázaro came on the scene, and the media had made the most of every opportunity to capitalize on the general’s magnetism. Five years ago Lázaro had smuggled his book
Right to Choose
out of Saint Pierre and it had become a worldwide bestseller acclaimed both for its philosophy and for its poetic style. A poet and a warrior. How was anyone supposed to fight against a combination like that? She just wished Brett hadn’t been one of those thousands to fall under his spell. She looked intently into Paco Renalto’s eyes. “Yet you caution me against risking my own life for the man.”

“You’re not one of us. You’re an American and you’ve told me yourself you have no sympathy for our cause.” Paco leaned back in his camp chair. “I’ve been with Ricardo since we were students
together at the university. He’s closer than a brother to me.”

Brett had been with the revolutionaries for only six months and he expressed the same kind of loyalty to Lázaro—loyalty that had landed him in a wheelchair in a clinic in Barbados. “I don’t have to be one of Ricardo Lázaro’s so-called adorers to help him escape from prison. You said yourself that the fact I’m not a citizen of Saint Pierre is in my favor. The junta’s secret police has no record or fingerprints on file for me.”

“True.” Paco gazed at her thoughtfully. “We could falsify your documents to make sure you appear to be a vulnerable target to Jurado.”

“Captain Emilio Jurado. He commands the security police at the Abbey. You’ve heard of the Abbey?”

“Yes.” Everyone in the world knew of the security prison known as the Abbey. Formerly a religious monastery, it had been converted into one of the most horrendous political prisons in the world. Human rights organizations were constantly
condemning the atrocities reported to take place there.

“That’s where they’re keeping Ricardo. He’s been there for over five months.”

Lara flinched and her grasp tightened on the wooden arms of her chair. She should have known they’d keep a prisoner of Lázaro’s importance at that hellish place. Dear heaven, what was she doing sitting there in the middle of a military stronghold trying to talk Renalto into letting her help free Lázaro? She wasn’t one of those tough guerrilla women she had seen as she had been led through the camp. She hated even the thought of war. “I’m surprised that Lázaro’s still alive if he’s been at the Abbey that long.”

“They stopped torturing him after the first few weeks. They knew he wouldn’t break and they didn’t want to make a martyr of Ricardo by killing him.” Paco’s lips tightened grimly. “However, they still hope to damage his image by forcing him to betray us. Jurado’s been coming at him from another angle for the last month.”

What kind of man could withstand weeks of torture inflicted by men more sophisticated in the
art of cruelty than the priests of the Spanish Inquisition, Lara wondered. “How do you know all this?”

“We have a man at the Abbey. He’s one of Jurado’s officers. We couldn’t get him in the cell block, but he works in Jurado’s office and is occasionally able to exert a certain influence.” Paco looked down at the papers on his desk. “Why are you willing to help us, Miss Clavel?”

He nodded. “I knew your brother well. He’s a brave man.”

“He’s an idealistic idiot who fell under Lázaro’s spell like all the rest of you,” she said bluntly. “And look where it got him.”

“And you don’t consider yourself an idealist?”

“Of course not. I’m as hardheaded as they come. The only reason I’m here is that I know the moment they release my brother from the hospital he’ll be back here on this godforsaken island trying to rescue Lázaro from that prison.” She gestured impatiently. “The doctors say he needs another six months of outpatient therapy, but there’s no way he’ll do it. If I don’t get Lázaro out
of prison before he’s released, he’ll be hobbling down here on crutches.”

“And that’s the only reason?”

She was silent a moment longer before she admitted reluctantly, “I owe Ricardo Lázaro. My brother told me your fearless leader was captured because he led the team that rescued Brett’s platoon when they were overrun by the enemy.”

“That’s true.” Paco smiled faintly. “But Ricardo saved many American lives that night, and the members of those men’s families didn’t come rushing down to save his neck.”

“Yes.” Paco’s smile faded. “The war has come to a standstill without Ricardo. We need someone in that prison, and getting a woman in will be far easier, according to what our man at the Abbey tells us.” He shrugged. “As I said, I don’t like it, but for the good of Saint Pierre we’re forced into many decisions we don’t like.”

“The good of Saint Pierre or the good of Ricardo Lázaro?”

“Ricardo Lázaro
is
Saint Pierre.” For an instant Renalto’s face was illuminated with the same expression Lara had seen on her brother’s face when he had spoken of Lázaro. “You’ll realize that when you meet him.”

“If I don’t get killed first,” she said lightly.

“I know. You’re frightened and you think to hide it with laughter.”

“I’m not frightened. I’m just—” She broke off as she met his gaze. “Well, perhaps a little.”

“It’s all right to be frightened.” Paco leaned forward and gently covered her hand with his own. “We’ll do all we can to protect you. If it’s any comfort to you, Ricardo is worth any risk.”

She moistened her dry lips with her tongue. “I’m not sure anyone is worth this kind of risk. I don’t even know why I’m doing this. Brett inherited all the swashbuckler qualities in the family. I’m not at all brave.”

“No?” He smiled curiously. “It wasn’t easy for
you to come to a war-torn country like Saint Pierre, and it must have been even harder to find someone to bring you to me. Perhaps you’re braver than you think.”

She shook her head. “I’m only doing what I have to do. There’s nothing brave about that.” She straightened her shoulders and continued briskly, “Now, tell me what I have to do to get Lázaro out of that prison.”

The Brotherhood of the Rose by David Morrell
Four O'Clock Sizzle: An Inspector Rebecca Mayfield Mystery (The Rebecca Mayfield Mysteries Book 4) by Joanne Pence
Death of a Nurse by M. C. Beaton
Truth and Lies by Norah McClintock
The Watchers Out of Time by H.P. Lovecraft
Dandy Gilver and a Deadly Measure of Brimstone by Catriona McPherson
Hosker, G [Sword of Cartimandua 09] Hero of Rome by Griff Hosker
All This Heavenly Glory by Elizabeth Crane
If I Lie by Corrine Jackson
Immortal by Bill Clem