Read Struck by Genius: How a Brain Injury Made Me a Mathematical Marvel Online

Struck by Genius: How a Brain Injury Made Me a Mathematical Marvel 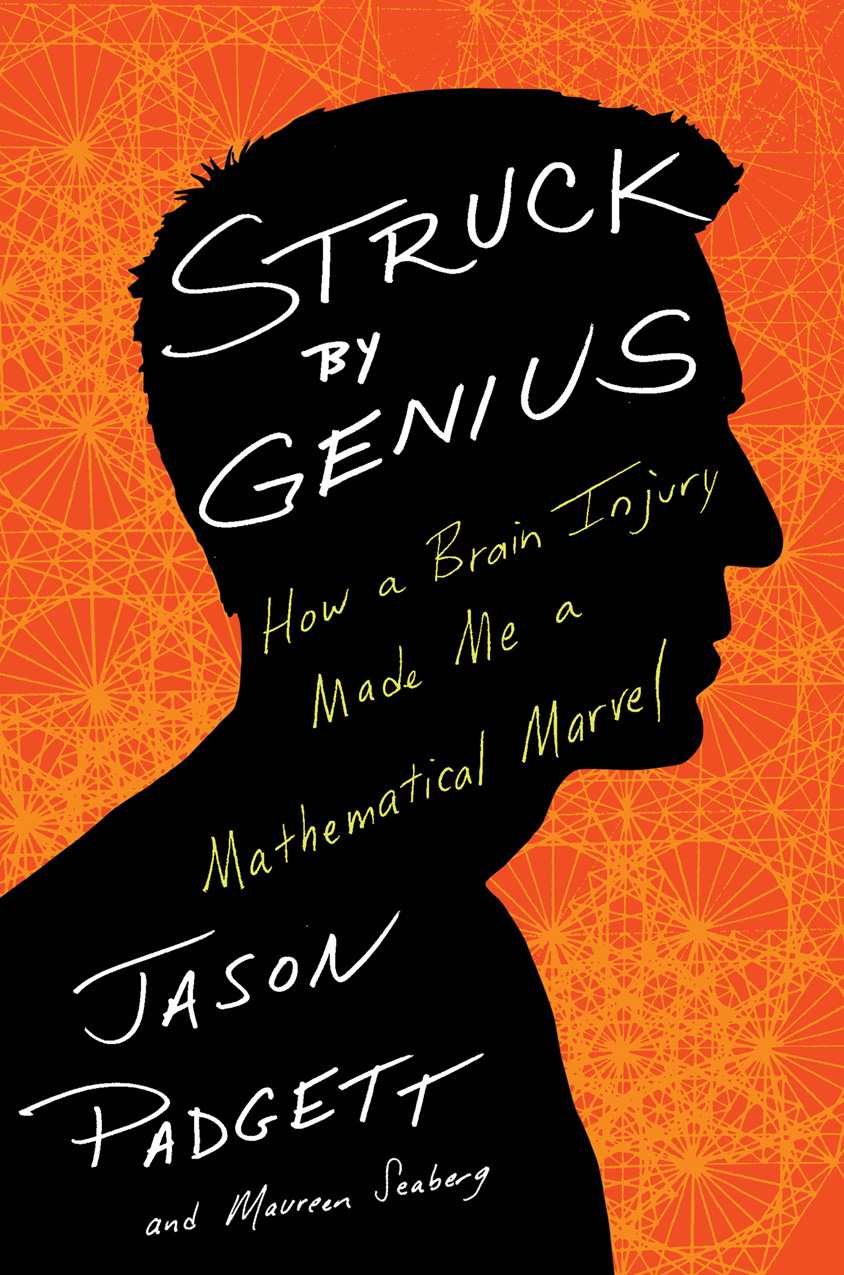 A Note from Maureen

The Edge of a Circle

The Hermit and the Hermitage

The Man from Planet Futon

The Library of Congress has cataloged the print edition as follows:

Struck by genius : how a brain injury made me a mathematical marvel / Jason Padgett, Maureen Ann Seaberg.

A Note from Maureen

I’
VE NEVER MET
anyone like Jason Padgett, yet he reminds me of my brother, my neighbor, my mailman, and the guy behind the deli counter up the street. He’s just a likable, salt-of-the-earth, sweet fellow wrapped up in the most extraordinary of circumstances, almost as though he woke up one morning and swallowed the sun.

I had an immediate and visceral reaction to his story when I first stumbled upon it, and during our initial e-mail exchanges, he patiently responded to my incredulous reactions (yes, he’d suffered a traumatic brain injury during a mugging, and no, he’d never been able to draw like that before) and gave me the specifics of his experience, which dropped my jaw at every turn. But it was really the way he opened up to me (I was a complete stranger, after all), the warmth and passion and optimism he brought to even the lowest points of his story, that convinced me of his star quality. Two weeks later, when we finally met in person, my fate was sealed.

It was clear that he’d completely rebounded from his severe agoraphobia and rediscovered the joy of conversation, and whether he was speaking to the cashier who sold us lunch that afternoon or the neuroscientists he mingled with months later—or me, for that matter—he was charming, humble, and, most of all, inspiring. What happened to Jason couldn’t have happened to a kinder, more genuine, or more innocent person, and the fact that he survived years of insecurity, paranoia, and fear and found his way back to being as magnetic as ever, only with a truer sense of purpose, never ceases to give me hope. When you meet Jason, talk to him on the phone, or see him onstage, it takes only a few seconds to see the innate good in him that preceded and outlasted his injury, and it takes only a few seconds to start seeing the world with as much wonder as he does.

When Jason agreed with me that his story should be told, he admitted that he could no longer write particularly well, and he has found that his desire to read about subjects that don’t relate to math is greatly diminished. He was never much of an English student even before his assault, and after it, those skills he had seemed to decline, an unfortunate side effect of his brain injury. (I should point out that he handles this and myriad other tradeoffs with tremendous grace.) I, however, was a writer eager for such a profound story. I’ve had synesthesia—a neurological phenomenon causing the blending of senses—ever since I was a child, but I never encountered anything like Jason’s mathematical, empirical synesthesia. We had some of each other’s puzzle pieces, so we decided to team up. It is Jason’s voice you will hear in the pages that follow, as we tell his story together.

Along this journey, Jason and I have logged thousands of miles, meeting in New York, Sweden, Wisconsin, and Washington. We’ve spent hundreds of hours on the telephone and writing e-mail. We’ve pondered the cosmos and consciousness and life itself in the kind of conversation usually reserved for late nights in college residence halls. We’ve laughed a lot and we’ve cried together too. I have been humbled and inspired a thousand times over. I thank his wife, Elena, and his daughter, Megan, for sharing this incredible human being with me and for giving me the chance to share his story with you.

I
F YOU COULD
see the world through my eyes, you would know how perfect it is, how much order runs through it, and how much structure is hidden in its tiniest parts. We’re so often victims of things—I see the violence too, the disease, the poverty stretching far and wide—but the universe itself and everything we can touch and all that we are is made of the most beautiful geometric patterns imaginable. I know because they’re right in front of me. Because of a traumatic brain injury, the result of a brutal physical attack, I’ve been able to see these patterns for over a decade. This change in my perception was really a change in my brain function, the result of the injury and the extraordinary and mostly positive way my brain healed. All of a sudden, the patterns were just . . .
there,
and I realize now that my injury was a rare gift. I’m lucky to have survived, but for me, the real miracle—what really saved me—was being introduced to and almost overwhelmed by the mathematical grace of the universe.

There’s a park in my town of Tacoma, Washington, that I like to walk through in the mornings before work. I see the trees that line its path as anyone would, the branches and the bark, but I see a geometrical blueprint laid on top of them too. I see triangular patterns emerging from the leaves, reminding me of the Pythagorean theorem, as if it’s unfolding in the air, proving to me over and over again what the ancient Greek philosopher and mathematician Pythagoras deduced thousands of years ago: the sum of the squares of the legs of a right triangle (a triangle in which one angle is a right angle, or 90 degrees) equals the square of its hypotenuse. I don’t need a calculator to know that the simple formula most of us learned in school—
a
2
+ b
2
= c
2
—is true; I can see it instantly in the trees all around me. To me, a tree is more than its geometry, but geometry is also far more than most people realize. I think it’s everything.

I remember reading that Galileo Galilei, the Italian astronomer, mathematician, and physicist (and one of my heroes), said that we cannot understand the universe until we have learned its language. He said, “It is written in the language of mathematics, and its characters are triangles, circles, and other geometric figures, without which it is humanly impossible to understand a single word of it.”

This rings true for me. I see this hidden language of the world before my eyes.

Doctors tell me that nothing in my brain was newly created or added when I was injured. Rather, innate but dormant skills were released. This theory comes from psychiatrist Darold Treffert, who is considered the world’s leading authority on savants and acquired savants. He treated the late Kim Peek (the inspiration for the savant character in the movie
Rain Man
)
,
a megasavant who memorized twelve thousand books, including the Bible and the Book of Mormon, but who had so many physical challenges that he had to rely on his father for his most basic needs. When I met with Dr. Treffert in his hometown of Fond du Lac, Wisconsin, he told me that these innate skills are, in his words, “factory-installed software” or “genetic” memory. After interviewing me in his office and in his home, he declared that my acquired synesthesia and savant syndrome was self-evident, and he also suggested that all of us have extraordinary skills just beneath the surface, much as birds innately know how to fly in a V-formation and fish know how to swim in a school. Why the brain suppresses these remarkable abilities is still a mystery, but sometimes, when the brain is diseased or damaged, it relents and unleashes the inner genius. This isn’t just my story. It’s the story of the potential secreted away in all of us.

The first thing I do every morning is make my way to the bathroom, turn on the faucet, and let the sink fill up. I watch the water flow and wonder why it doesn’t sound like the strumming of tightly wound strings. The structure of flowing water vibrates in a specific geometric form and frequency to me, and if it were to freeze midstream, I’d see a web, but one made up of tiny crystals rather than spider’s silk. If I could hear it after it froze, it would sound like tinkling glass shards falling into the basin. I like to start my days with water. It may slip through my fingers, but it is a constant comfort.

I look at myself in the mirror and make sure my hair’s not getting too long. I like it cropped close now. I grab my toothbrush and count how many times I run it through the water while brushing my teeth. It has to be exactly sixteen times. I don’t know why I chose that number, but it’s fixed in my mind like my street address or my zip code. I try not to worry about it too much and stare back at the intriguing water webs, working to memorize all of the angles so that I can draw a picture of the image later. I’ll probably spend hours with a pencil and ruler later on, capturing on paper every inch of the razor-sharp symmetry.

Next, I walk into the living room and throw back the drapes. If it’s a clear day, I’m in for a real show. The sun comes shining through the leaves of the trees like a million little lights, as if the leaves are blades and they cut the sun up into a million diamonds. Then the rays fan out between the leaves, falling over them like an illuminated net. Watching this, I always think of the famous double-slit experiment, in which light behaves like a particle and a wave at the same time. My friends tell me that to them, it’s just the sun shining through the trees. I can barely remember a time when I saw the world the way most everyone else does.

On an overcast or stormy day, I pay more attention to the branches swaying in the wind. The movements are choppy and discrete, like a series of frames of a film, with black lines separating each image. At first, I got dizzy when this happened, and I had to grab the back of a chair or lean against a wall. Now I’m used to it, though I still have moments of vertigo.

Next I move on to the kitchen and put on some coffee. It’s one of my routines, but it thrills me every single time I watch the cream being stirred into the brew. That perfect spiral is an important shape to me. It’s a fractal—a repetitive geometric form found everywhere in nature, from the shell of a nautilus up to the Milky Way galaxy. Suddenly it’s not just my morning cup of joe—awesome as the coffee in the Pacific Northwest is—it’s geometry speaking to me again. And I never get tired of it.

05. Children of Flux and Anchor by Jack L Chalker
Ghostmaker by Dan Abnett
That Savage Water by Matthew R. Loney
A Picture-Purrfect Christmas (A Klepto Cat Mystery Book 13) by Patricia Fry
Horror Tales by Harry Glum
Time Done Been Won't Be No More by William Gay
Missing by Sharon Sala
Unseemly Science by Rod Duncan
No Love for the Wicked by Powell, Megan
Half Lies by Sally Green