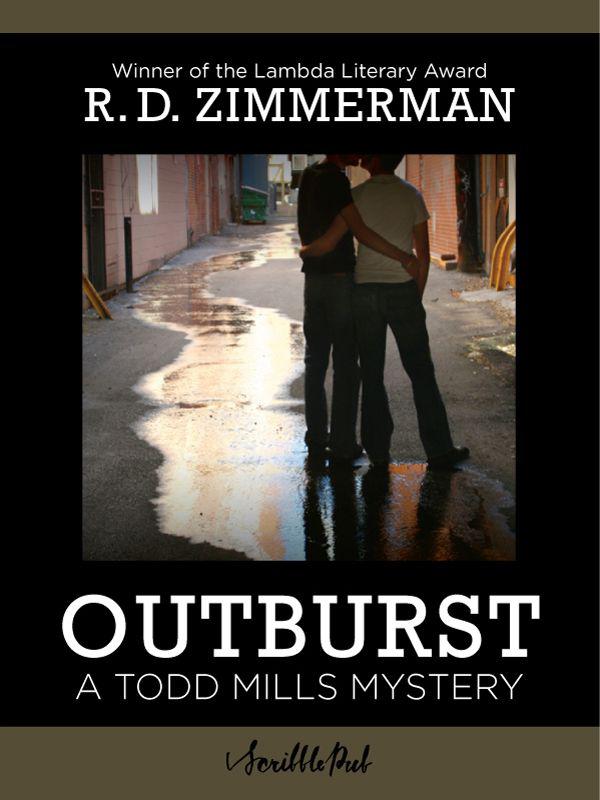 And by R.D. Zimmerman writing as Robert Alexander

the most original of the original™

Names, characters and incidents depicted in this book are products of the authors' imaginations or are used fictitiously. Any resemblance to actual events, organizations, or persons, living or dead, is entirely coincidental and beyond the intent of the authors or the publisher.

Many thanks to those who so generously shared their expertise and encouragement, including investigative reporter Gail Plewacki, producer Cara King, Senior Assistant Hennepin County Attorney Kathryn Quaintance, Sergeant Rob Allen, Dr. Don Houge, Gail and Betsy Leondar-Wright for their insights and wisdom, Ellen Hart, Katie, Lars, Chiara, my wonderful editor Tom Spain, and, of course, the very many transgendered people who've shared their joys, hopes, and triumphs both in a number of books and on the Internet. I tried to get it right, forgive me if I didn't.

While there have been cases of genital injury, this novel is a work of fiction. The names, characters, places, and incidents in this novel are the product of the author's imagination or are used fictitiously. Any resemblance to actual persons, living or dead, events, or locales is entirely coincidental.

Sex was the last
thing on her mind when she'd agreed to help cater the benefit, but it was the first thing she thought of when she saw him.

Dressed in a snug black-and-white uniform, Kris was carrying a tray of canapés—little half-moon pastries filled with smoked duck and a tiny bit of chutney—when she turned from one small group of guests to the next. And there he was, standing in front of the dark-oak bookcase. Tall. Brown hair gone quite silver. Blue suit, blue tie, blue eyes. A strikingly handsome face, perhaps once a bit boyish, now simply and utterly endearing.

She, a born-and-bred Minnesota beauty with short blond hair that she curled to give it height and body, held out the silver plated tray, found her voice, and said, “Care for an appetizer, sir?”

He turned from a man in a brown suit with whom he was discussing something about the stock market—Up, up, up, isn't it great?—glanced over the platter of beautifully arranged food, then looked at her. And that's what scared Kris, for their eyes met and held on, which in turn sent a rush coursing through Kris's lithe body. She was so quickly aroused that later she would look back on the moment and think that it was as if he'd thrown a switch on in her—no, a circuit breaker, she would silently laugh, because she'd never felt anything so powerful before—but right then and there she concentrated on holding the tray steady. Which proved no easy feat, for he reached for one of the hot canapés and brushed the back of one of his large, warm, hairy hands against her long fingers. Kris tremored as if she were being penetrated—whatever you do, girl, don't drop this fucking tray, ‘cause you'll get your ass fired and you need the money, you know you do—then quickly turned.

She was in her early twenties, he had to be in his mid-forties if not early fifties. Surely this guy, whoever he was, was old enough to be her father. Get away, that was all Kris could think of. She looked the innocent sort, but the stark truth was that she'd had trouble enough in her young life, had done more in bed with more guys than most women would do in a lifetime, and so she was wise well beyond her years. She knew what had just happened here, just as she knew it could come to no good.

Escaping from him, Kris continued through the largest home she'd ever been in, a stucco mansion built by some farina heir ninety years ago, a huge butter-cream structure that fancied itself on the hills of Tuscany rather than on the west side of Lake of the Isles in Minneapolis. Kris scurried from the library and into the massive entry hall, a vaulted space with a black-and-white marble floor and now filled with perhaps fifty or sixty guests sipping champagne and munching everything from the smoked-duck pastries to pepper-crusted beef crostini. Only one person, a slim, short man of average looks with what seemed a perpetual frown, had neither food nor drink.

Kris could turn on her manners as easily as she could her coyness, and she extended the tray of hors d'oeuvres to him and said, “Wouldn't you care for something? You've been standing by the front door all evening.”

“No,” he said, pushing up his glasses with his right index finger and glancing quickly at her. “Not while I'm working.”

Such was this law clerk, the host's assistant, who by all accounts was a tad nerdy. Obviously brilliant. Very severe. He'd not only taken it upon himself to welcome each and every guest into the McMartin home—the McMartins, scions of the local newspaper family, were off hiking in Tibet and had loaned out their house for tonight's event—but to oversee virtually every aspect of the event. And back in the kitchen Kris had been forewarned that this guy, not his boss the judge, would be the difficult one to please. In other words, beware the hired pain in the ass.

“Of course,” Kris replied, her lips parting into a gentle smile, for she was first and foremost a temptress. “But how will you know if our food is up to your expectations if you don't try anything?”

“Oh, right,” he said, focusing on the canapés with workman-like concentration.

Offering him a napkin, Kris added, “The duck ones are my favorite. They're luscious.”

After examining them all he chose one and shoved the entire thing into his mouth. When fresh guests suddenly appeared at the door, however, he all but jumped and all but swallowed his food whole. He then quickly, carefully, nervously wiped his right hand and held it out.

“Thank you for coming to the fundraiser. I'm the judge's law clerk, Douglas Simms.”

Turning back to the guests, Kris foisted the rest of her food on several clumps of people, then headed toward the living room. But first she glanced back. No, he hadn't emerged from the book-lined room, wasn't lingering in the doorway, as she had both half hoped and feared. Nothing. That was nothing back there, she told herself. And you should be glad.

Carrying her empty tray, Kris descended two steps into the living room, a huge space that alone was bigger and taller than most houses. There were supposed to be some three hundred people here, which it most definitely seemed there were, to raise money for the Poverty Law Foundation. Kris even recognized some, including the Milquetoast mayor of Minneapolis and a clump of media personalities. Turning, she even saw that gay guy from TV, Todd Mills, who was now trying to bear up as Babs Curtis, the larger-than-life radio personality with the large voice and pearls, was assaulting him with her large banter. Kris even scored a scowl from Ms. Curtis, who, unseen by virtually anyone else, puffed out her chest as if to say, Young lady, you may have gorgeously slim legs, lips like an overripe plum, a nice flat tummy, and the most lascivious of faces, but, girlfriend, those titties of yours are nothing compared to these bazooms. And thank God for that, thought Kris, hurrying along. Sure, she could use a little more chest, but not jugs like those.

She proceeded along the back wall of the living room and past the grand piano, where some bald guy in a tux was playing light classical music that was all but drowned out by the buzz of the crowd.

As she slipped past the Steinway, the musician, who was certainly old enough to be her grandfather, swooned toward her and mouthed, “I love you!”

Shit, she thought with a sour smile, too much makeup. Kris had waitressed before, but she'd never worked a catered party, and she was here only because her neighbor and pal Burt had begged her just three hours ago. Two of our waiters have this summer flu thing, he'd pleaded, I'm beyond desperate!

“This is the biggest contract Travis has ever got,” Burt said, referring to his boyfriend, Travis, with whom he owned Peacock Catering. “And every rich person in town is going to be there, because the buzz is that this really isn't about raising money for some stupid foundation. No, they're saying this is really Judge Stuart Hawkins's debutante ball—supposedly he's just a few weeks away from resigning so he can run for governor. We blow this and Travis might as well flush his business down the toilet. We succeed and we'll be catering banquets for the future governor, because if Hawkins does in fact run he's sure as hell going to get elected.”

Okay, Kris had said, but how was she supposed to know that you weren't supposed to outshine these matrons, that six o'clock in the evening was much too early for the depth of her eyeliner and the richness of her lipstick? She was only just learning how to tone down her beauty, that only a hint of makeup made her blue eyes and high cheekbones look more classic than cheap. Yes, she with her short blond hair and her slim but regal stature was a real Scandinavian beauty. She knew that for a fact, couldn't help but pass as such.

On the far side of the room Kris climbed two steps and passed through an arch into the dining room. And there he was, so utterly handsome and so obviously waiting in ambush. An empty glass of champagne in one hand, a crumpled napkin in the other, the silver-haired man fixed his eyes on her as steady as headlights on a doe. More than several people noticed, Kris was sure, and this time her pale skin flushed not with desire but with embarrassment.

He took a half-step toward her. His thin lips parted. And Kris ducked to the right, whooshing through a swinging door, passing through a pantry that was lined with fine dishes and crystal glasses, then entering the huge kitchen. Kris swung her doily-covered platter onto the center island and stood there. Oh, shit, why had she agreed to this?

Reed: Scifi Alien Invasion Romance (Hell Squad Book 4) by Anna Hackett
Counterfeit Love by Julie Fison
The I Ching or Book of Changes by Wilhelm, Hellmut
Sky Jumpers Book 2 by Peggy Eddleman
Sing It to Her Bones by Marcia Talley
Demonbane (Book 4) by Ben Cassidy
Rebels in White Gloves by Miriam Horn
Bound to be Tested: Emergence, Book 3 by Becca Jameson
Sassy Ever After: Bite My Sass (Kindle Worlds Novella) by V. Vaughn
On Any Given Sundae by Marilyn Brant