Read On Any Given Sundae Online

On Any Given Sundae 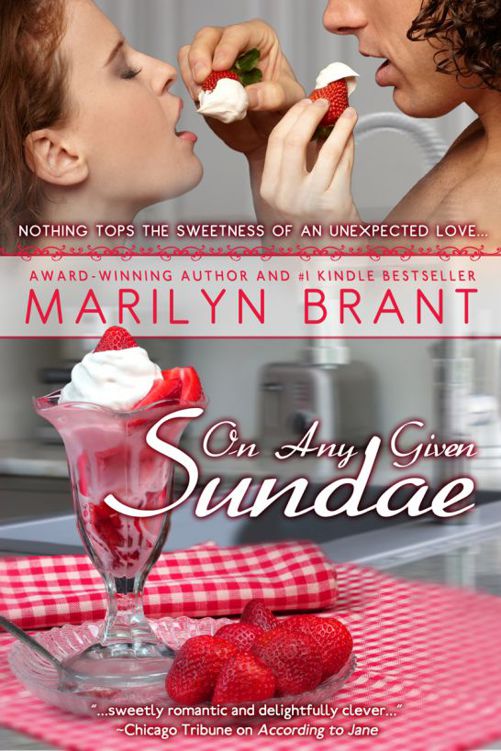 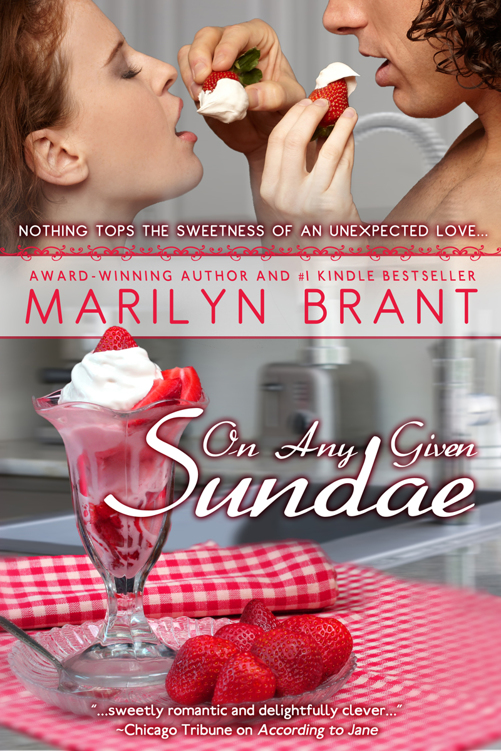 ON ANY GIVEN SUNDAE

On Any Given Sundae

Copyright 2011 by Marilyn B. Weigel

All rights reserved. Without limiting the
rights under copyright reserved above, no part of this publication
may be reproduced, stored in or introduced into a retrieval system,
or transmitted, in any form, or by any means (electronic,
mechanical, photocopying, recording or otherwise) without the prior
written permission of the copyright owner and the publisher of this
book, excepting brief quotations used in reviews.

This is a work of fiction. Names, characters,
places, brands, media and incidents are either the product of the
author’s imagination or are used fictitiously. Any resemblance to
actual events, locales, organizations, businesses or persons,
living or dead, is entirely coincidental.

This ebook is licensed for your personal
enjoyment only. This ebook may not be re-sold or given away to
other people. If you would like to share this book with another
person, please purchase an additional copy for each recipient. If
you're reading this book and did not purchase it, or it was not
purchased for your use only, then you should return to
Smashwords.com and purchase your own copy. Thank you for respecting
the author's work.

Learn more about award-winning author Marilyn
Brant at her website:

and at her Smashwords book page:

Other Books by Marilyn Brant:

A Summer in Europe

For Simone & Sara, who read it
first…thank you.

It was long, Elizabeth Daniels noted. Without
a doubt, Jacques’s was several inches longer than most.

She leaned in, scanned it and ran her index
finger along its prodigious length. She heard Jacques’s quick
intake of breath.

Silken to the touch, yet deliciously firm.
Broad. Sleek. Inviting. She nodded her approval, swallowed and
brought her lips to its soft-brown side. A thick, creamy droplet
poised on the tip. She moaned, anticipating the coming moments. Her
tongue snaked out to lick the end clean.

“Elizabeth, I’m pleading with you.”

“Oh, all right.” She licked the tip again,
inhaled deeply and took a big bite.

Jacques exploded next to her. “Well?”

“Incredible,” she declared. “This is the
single best éclair I’ve had in months.” She glanced at Jacques’s
expression. “Years,” she amended.

“And you’re absolutely right. This new recipe
is even better than your last batch. It has to be featured in the
book. In fact, I’m giving you the cover spread for the pastries
chapter.”

“Yes! Yes!” The portly, thirty-six-year-old
French chef did a little jig in the front aisle of Tutti-Frutti,
the ice cream parlor and confectionary shop where she and Jacques
worked part time. Elizabeth’s uncle and his business partner owned
the place, and they’d turned it into “The Coolest Hotspot” in
Wilmington Bay, Wisconsin.

Elizabeth grinned at her good friend’s
jubilance. Jacques’s enthusiasm was one of the many things she
adored about him. Another thing was that, despite the remnants of
Jacques’s French accent, they spoke the same language—a vernacular
inhabited by fillo dough, shaved almond bark and imported spices.
As one of the few people she could be herself around, the Frenchman
was worth his weight in dutched cocoa.

Jacques pranced around a little more, his
receding hairline becoming more prominent when he jumped. “I knew
you’d love it,
chéri
,” he said. “Didn’t I tell you you’d
love it?”

Elizabeth wiped the chocolate frosting and
custard splotches off her chin before scribbling a few cursory
comments in her notebook. She hadn’t exaggerated in her assessment.
Every one of Jacques’s creations was bigger and better than the
competition. She needed her first solo dessert cookbook—
Perfect
Pastries, Pralines and Parfaits
—to do the same.

He gave her a saucy wink. “You know, I think
you need to take my marriage proposal more seriously,
ma petite
brioche
. Just imagine the two of us together. We could bring
tasty comfort to millions of people daily. Sweet-toothed folks the
world over,” he raised his voice and waved his oven mitt in the air
with fervor, “will flock to Wilmington Bay to see where this wonder
all began.” He beamed at her. “Jacques and Elizabeth—Saviors of the
Dessert Deprived.”

“Please tell me that’s not going to be our
slogan.”

He shrugged. “I will leave the naming up to
you, but I’ll be hurt if you don’t think it through just a bit. Our
possible engagement, I mean.” He couldn’t disguise the mischievous
glint in his eye. “Friendship is the key to long-lasting love. I’d
be honored to marry such a good friend as you, Elizabeth.” His
voice dropped. “If you’ll have me.”

She walked to where he stood behind the
counter and threw her arms around him. “You are an amazing man…and
yet, totally, unbelievably insincere on this subject.” She punched
him on the shoulder. “But thanks for trying to cheer me up. I may
have given up looking for love, but one of these days you’ll find
someone worthy of you.”

“Nonsense. You’re just saying ‘no’ now
because you want the empire all to yourself, you greedy girl!” He
dipped her backward, as if in a finale to a dance routine, and
planted a brotherly kiss on her forehead. “In another year or two
you’ll be ready for me.”

She laughed and they stepped apart. Their
conversations were peppered with moments like this: Jacques tossing
a half-hearted proposal her way and her waving him off until next
time. There was truly
no
romantic chemistry between them,
but loneliness made people play these kinds of games. They’d spent
hours recounting their relationship woes, alongside their other
close friends, Nick and Gretchen. All of them had known too many
years of heartbreak.

“So, it’s a bright and lovely Sunday morning.
What else is on your agenda today?” he said as he walked over to
the oven and pulled out a steaming batch of fresh cranberry
croissants. Elizabeth could feel the butter clogging her arteries
from across the room.

“I’ve got some rewrites to do on the
pecan-praline cookies,” she told him. “I had Nick try out the lead
recipe, and he said the tops burned if we left them in at three
hundred seventy-five degrees for the whole twelve minutes. They’re
only supposed to be ‘golden brown.’”

“I’ll bring you one of these to taste when
I’m done,” Jacques said, taking the croissant tray into the
backroom to decorate the pastries with icing.

Just then, her uncle, Siegfried Finklehooper,
burst through the front door. From the look on his face, she knew
bad news had crossed his path, and now it was going to cross
hers.

“Hi, Uncle Siegfried,” she said. “What’s
wrong?” She brushed a strand of frizzy reddish-brown hair away from
her eyes and stared at him. His blue eyes flashed with strange
brightness.

“I need your help,
Liebling
,” her
uncle said, using his native German endearment for “darling,” which
would’ve made her smile at any other time. He’d called her mother
that, too, when she was alive.

“I must go back to Bavaria.”

“When? Why?” Elizabeth’s worry gene jumped
into gear and her pulse picked up speed. She could only think of
one reason he’d have to go to Germany. “Is it Aunt Anita?”

He nodded, and Elizabeth knew he’d be flying
out immediately. He’d promised his late wife, Elizabeth’s wonderful
Auntie Bette, he would never let her sister Anita die alone. But at
age seventy-two, that wouldn’t be an easy trip for Uncle Siegfried
to make.

“No, no,
Liebling
. You have a deadline
on your cookbook, and I must be gone for several weeks, maybe a
month. Either until she recovers or until…” He let that distressing
thought trail off. “Pauly’s going with me.”

“I, um…
really?”
she said. Pauly
Carrera, her uncle’s business partner of forty years, was a
full-blooded Italian a few years older than Uncle Siegfried. He was
also cantankerous, prickly and on the opposite side of obliging.
“But, who’s going to run the shop then?”

Pauly chose that moment to make his entrance.
“Did you tell her yet?” he said in a gruff voice to her uncle.

Uncle Siegfried shot him an irritated look.
“We leave tonight,
Liebling
,” he explained to Elizabeth.
“And we were hoping we could count on you to be in charge while
we’re away.”

“
Me?”
Her pulse halted mid-beat. As it
was, she would barely make her deadline on the cookbook but,
looking at her uncle’s face, she knew she’d have to burn a lot of
midnight oil this summer because she couldn’t say no to him. “Oh,
sure—if—if that’s what you think is b-best.” There were also her
nerves and her “minor” public-speaking problem, but she’d just have
to deal with those issues too.

“Thank you,” Uncle Siegfried said. “You’re
one of the few people we’d trust with Tutti-Frutti, and you know we
could never afford to close the shop for that long.”

“Don’t worry,” she said, rubbing gently the
paper-thin skin on her uncle’s hand, praying she could handle this
task. “I’ll take care of everything.”

Pauly coughed and patted his chest with his
fist. “Well, it’s not like you’ll have to do it all alone.”

“Why?” Elizabeth couldn’t disguise her
surprise at this news. “Who else will be here?”

Pauly shot her a curious stare. “Didn’t your
uncle tell you anything? You know my nephew? Roberto Gabinarri?” He
rolled his R’s in that deeply Italian way. It sounded beautiful,
but all she could think was,
Oh, my God. No!

“Yeah, yeah, that’s what he always goes by, I
guess,” Pauly said with a shrug. “Well, he’s coming up to help,
too. Between the two of you, you shouldn’t have any problems
keeping the place together for a few weeks.”

This wasn’t happening. She wasn’t hearing his
name again after all of these years. Ten years, for goodness sake.
There was absolutely no way she could—or would—work with him. None.
She’d never be able to speak a coherent sentence in his
presence.

“You’ve already t-t-talked to him?” God help
her. If Pauly set things up with Rob, there’d be no way for her to
get out of this without looking even more foolish than she
felt.

Pauly nodded vigorously, and Elizabeth’s
heart sank to her toes. “In a manner of speaking,” Pauly said.

She opened her mouth to question him but her
throat clenched up. It was like high school all over again. Before
she could force the words out, Uncle Siegfried interrupted.

“We’re so grateful to you,
Liebling
.”
Her uncle waved a sheet of paper at her. “I wrote down Anita’s home
phone number and address, in case any questions come up.”

Pauly shot a rare grin in her direction. “But
don’t worry. This will be easy for you. And Roberto—he’s a wiz at
these things.”

Pauly pulled out his cell phone. “Let me just
check on that now.” He rushed out of the room.