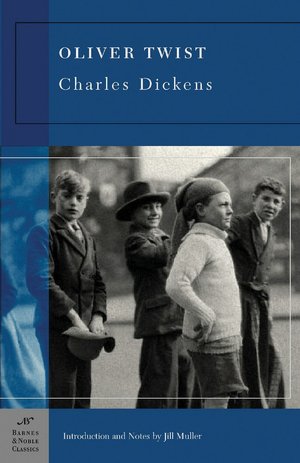 Table of Contents
FROM THE PAGES OF OLIVER TWIST
Title Page
Copyright Page
CHARLES DICKENS
THE WORLD OF CHARLES DICKENS AND OLIVER TWIST
Introduction
PREFACE TO THE THIRD EDITION
PREFACE TO THE FIRST CHEAP EDITION
PREFACE TO THE CHARLES DICKENS EDITION 1867
CHAPTER I - Treats of the place where Oliver Twist was born, and of the ...
CHAPTER II - Treats of Oliver Twist’s growth, education, and board.
CHAPTER III - Relates how Oliver Twist was very near getting a place, which ...
CHAPTER IV - Oliver, being offered another place, makes his first entry into ...
CHAPTER V - Oliver mingles with new associates. Going to a funeral for the ...
CHAPTER VI - Oliver, being goaded by the taunts of Noah, rouses into action, ...
CHAPTER VII - Oliver continues refractory.
CHAPTER VIII - Oliver walks to London. He encounters on the road a strange ...
CHAPTER IX - Containing further particulars concerning the pleasant old ...
CHAPTER X - Oliver becomes better acquainted with the characters of his new ...
CHAPTER XI - Treats of Mr. Fang the police magistrate; and furnishes a slight ...
CHAPTER XII - In which Oliver is taken better care of than he ever was before. ...
CHAPTER XIII - Some new acquaintances are introduced to the intelligent ...
CHAPTER XIV - Comprising further particulars of Oliver’s stay at Mr. ...
CHAPTER XV - Showing how very fond of Oliver Twist the merry old Jew and Miss ...
CHAPTER XVI - Relates what became of Oliver Twist after he had been claimed by Nancy.
CHAPTER XVII - Oliver’s Destiny continuing unpropitious, brings a great man to ...
CHAPTER XVIII - How Oliver passed his time in the improving society of his ...
CHAPTER XIX - In which a notable plan is discussed and determined on.
CHAPTER XX - Wherein Oliver is delivered over to Mr. William Sikes.
CHAPTER XXI - The Expedition.
CHAPTER XXII - The Burglary.
CHAPTER XXIII - Which contains the substance of a pleasant conversation ...
CHAPTER XXIV - Treats of a very poor subject. But is a short one, and may be ...
CHAPTER XXV - Wherein this history reverts to Mr. Fagin and company.
CHAPTER XXVI - In which a mysterious character appears upon the scene; and ...
CHAPTER XXVII - Atones for the unpoliteness of a former chapter; which ...
CHAPTER XXVIII - Looks after Oliver, and proceeds with his adventures.
CHAPTER XXIX - Has an introductory account of the inmates of the house to ...
CHAPTER XXX - Relates what Oliver’s new visitors thought of him.
CHAPTER XXXI - Involves a critical position.
CHAPTER XXXII - Of the happy life Oliver began to lead with his kind friends.
CHAPTER XXXIII - Wherein the happiness of Oliver and his friends experiences a ...
CHAPTER XXXIV - Contains some introductory particulars relative to a young ...
CHAPTER XXXV - Containing the unsatisfactory result of Oliver’s adventure; and ...
CHAPTER XXXVI - Is a very short one, and may appear of no great importance in ...
CHAPTER XXXVII - In which the reader may perceive a contrast, not uncommon in ...
CHAPTER XXXVIII - Containing an account of what passed between Mr. and Mrs. ...
CHAPTER XXXIX - Introduces some respectable characters with whom the reader is ...
CHAPTER XL - A strange interview, which is a sequel to the last chapter.
CHAPTER XLI - Containing fresh discoveries, and showing that surprises, like ...
CHAPTER XLII - An old acquaintance of Oliver’s, exhibiting decided marks of ...
CHAPTER XLIII
CHAPTER XLIV - The time arrives for Nancy to redeem her pledge to Rose Maylie. ...
CHAPTER XLV - Noah Claypole is employed by Fagin on a secret mission.
CHAPTER XLVI - The appointment kept.
CHAPTER XLVII - Fatal consequences.
CHAPTER XLVIII - The flight of Sikes.
CHAPTER XLIX - Monks and Mr. Brownlow at length meet. Their conversation, and ...
CHAPTER L - The pursuit and escape.
CHAPTER LI - Affording an explanation of more mysteries than one, and ...
CHAPTER LII - Fagin’s last night alive.
CHAPTER LIII - And last.
ENDNOTES
INSPIRED BY OLIVER TWIST
COMMENTS & QUESTIONS
FOR FURTHER READING
FROM THE PAGES OF OLIVER TWIST
“Please, sir, I want some more.”
(page 39)
He was, altogether, as roystering and swaggering a young gentleman as ever stood four feet six, or something less.
(page 83)
Having prepared his mind, by solitude and gloom, to prefer any society to the companionship of his own sad thoughts in such a dreary place, he was now slowly instilling into his soul the poison which he hoped would blacken it, and change its hue for ever.
(page 170)
It was a night for the well-housed and fed to draw round the bright fire and thank God they were at home; and for the homeless, starving wretch to lay him down and die.
(page 201)
“We have none of us long to wait for Death. Patience, patience! He’ll be here soon enough for us all.”
(page 210)
Men who look on nature, and their fellow-men, and cry that all is dark and gloomy, are in the right; but the sombre colours are reflections from their own jaundiced eyes and hearts. The real hues are delicate, and need a clearer vision.
(page 295)
Joy and grief were mingled in the cup; but there were no bitter tears: for even grief itself arose so softened, and clothed in such sweet and tender recollections, that it became a solemn pleasure, and lost all character of pain.
(page 450)
The boom of every iron bell came laden with the one, deep, hollow sound—Death.
(page 456)

Published by Barnes & Noble Books
122 Fifth Avenue
New York, NY 10011
www.barnesandnoble.com/classics
Oliver Twist was originally serialized in
Bentley’s
Miscellany between 1837 and 1839.
The present text is that of the Charles Dickens Edition, published in 1867.
Originally published in mass market format in 2003 by Barnes & Noble Classics with
new Introduction, Notes, Biography, Chronology, Inspired By,
Comments & Questions, and For Further Reading.
This trade paperback edition published in 2004.
Introduction, Notes, and For Further Reading
Copyright © 2003 by Jill Muller.
Note on Charles Dickens, The World of Charles Dickens and
Oliver Twist,
Inspired by
Oliver Twist,
and Comments & Questions
Copyright © 2003 by Barnes & Noble, Inc.
All rights reserved. No part of this publication may be reproduced or transmitted in
any form or by any means, electronic or mechanical, including photocopy,
recording, or any information storage and retrieval system, without the
prior written permission of the publisher.
Barnes & Noble Classics and the Barnes & Noble Classics
colophon are trademarks of Barnes & Noble, Inc.
Oliver Twist
ISBN-13: 978-1-59308-206-2
ISBN-10: 1-59308-206-1
eISBN : 978-1-411-43389-2
LC Control Number 2004100828
Produced and published in conjunction with:
Fine Creative Media, Inc.
322 Eighth Avenue
New York, NY 10001
Michael J. Fine, President and Publisher
Printed in the United States of America
QM
5 7 9 10 8 6
CHARLES DICKENS
Born on February 7, 1812, Charles Dickens was the second of eight children in a family burdened with financial troubles. Despite difficult early years, he became the most successful British writer of the Victorian age.
In 1824, young Charles was withdrawn from school and forced to work at a boot-blacking factory when his improvident father, accompanied by his mother and siblings, was sentenced to three months in a debtor’s prison. Once they were released, Charles attended a private school for three years. The young man then became a solicitor’s clerk, mastered shorthand, and before long was employed as a Parliamentary reporter. When he was in his early twenties, Dickens began to publish stories and sketches of London life in a variety of periodicals.