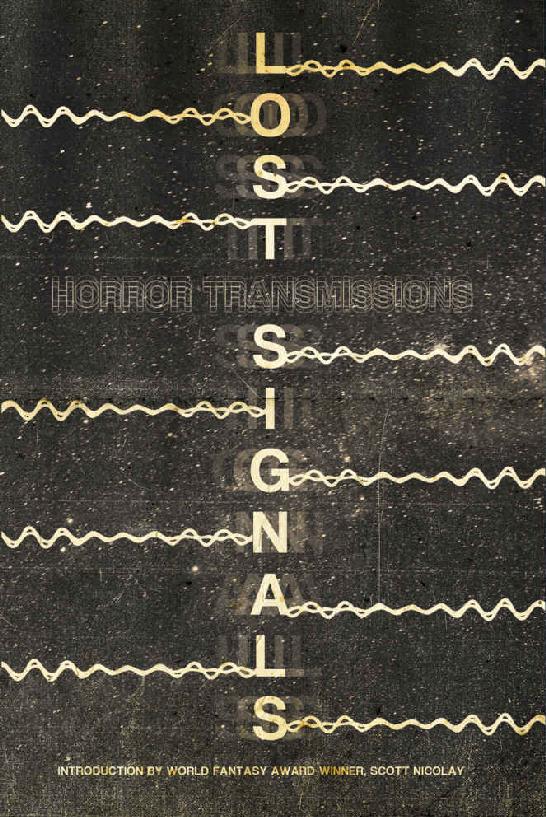 “This book will probably make you paranoid, if you weren’t already. And if you
were
already, well, I have it on good authority that tinfoil only amplifies the signals.”

“The voices gathered here are as diverse and disturbing as sussurating whispers between radio stations or a signal from a dead man’s hand.
Lost Signals
is one of the most haunting and engaging anthologies I’ve read in a long time, filled with equal measures of darkness and brilliance. If you’re looking to be terrified and entertained, read on but do exercise some caution.”

“One of the most genuinely disturbing anthologies in recent memory.”

The stories included in this publication are works of fiction. Names, characters, places and incidents are products of the authors’ imaginations or are used fictitiously. Any resemblance to actual events or locales or persons living or dead is entirely coincidental.

Without limiting the rights under copyright reserved above, no part of this publication may be reproduced, stored in or introduced into a retrieval system, or transmitted, in any form, or by any means (electronic, mechanical, photocopying, recording, or otherwise), without the prior written permission of both the copyright owners and the above publisher of this book.

“Transmission” by T.E. Grau originally appeared in
Dead But Dreaming 2
, 2011

If He Summons His Herd

The Givens Sensor Board

How the Light Gets In

The Desert of Wounded Frequencies

Eternity Lie in its Radius

The Sound of Yesterday

Children of a German Autumn

All That You Leave Behind

Several decades ago
I attended a performance by a local avant-garde musical ensemble in a small theater in Edison, New Jersey. The program included one of John Cage’s landscapes for radios, in which the score calls for the performers to adjust both the volume and frequency of the radios according to directions independent of the stations. I was a devotee of Cage at the time but had never heard one of the landscapes performed live before, so I was enthralled. The beauty of Cage pieces like the landscapes is in the way they force the audience to listen to familiar sounds in new ways. No two performances are ever the same.

About a third of the way through I caught a snippet of voice that made me disengage immediately. I thought I heard the announcer mention
missiles
. This occurred during the mid-’80s, when Reagan was playing his game of nuclear chicken with the Soviet Union. A moment later the performer spun the dial again and the rest of the message was lost. The members of the ensemble showed no alarm. I spun to examine the audience. They all seemed calm. Had I alone heard the clarion call of the apocalypse

? I froze and listened. If I were right one of the other stations would have to share a similar broadcast soon.

My mind raced from thought to thought for the remainder of the performance. My concentration was shot. What if nuclear war broke out while we were here, and all we heard were fragments of the Emergency Broadcasting System

? How long would the audience listen, oblivious

? Perhaps it was best to go listening to music—what little could we do now anyway

? Could it be Cage had intended it this way

? And all the while snatches of FM ephemera drifted into the ether, lost for eternity. Had they been our last broadcasts before Armageddon, perhaps some alien race might have found them of interest. Instead they were destined to remain unremarkable, despite my alarm, dissipating unheeded into the depths of space.

We are each of us antennae, tuned to the deep. And deep calls to deep, over and under us, around us . . . through us. Jack Spicer proclaimed the poem no more for the poet than the song is for the radio. Sun Ra told us there are other worlds that wish to speak to us. Signals are everywhere, piercing our bodies—unheard broadcasts, coded transmissions, via a million unseen wavelengths—T waves, radio, the breath of distant stars. The breath of things behind the stars.

Though the telegraph has been with us nearly two centuries, it was Marconi’s wireless that first opened our channels to other voices, other sounds. New technologies proliferated until the Information Revolution slowly began taking shape to reveal just how weird our world really is. Born in the blowback of the second world war, midwifed by code makers, codebreakers, and bombsight designers, the greatest change in human history emerged in the shadow of an age originally categorized as “Atomic.” What a mistake that label was. Information proved the bigger bombshell in the end.

By our very presence we interfere with transmissions to which we are oblivious. Our bodies block and distort, but they also
receive
. We are better doors than windows, but most of us are closed. Our bodies absorb entire the shorter wavelengths, higher energy particles, and cosmic rays. They imprint themselves upon our genetic codes, spawn our tumors and mutations, make of us fresh messages in turn.

Longer wavelengths pass right through us. For neutrinos and gravity waves we aren’t even here. Our radio telescopes tune to broadcasts from other worlds, but consider how recent Marconi’s breakthrough came for us. How long does the average civilization communicate via the electromagnetic spectrum

? How narrow a window are we traversing right now, and how many of our galactic neighbors remain in this same stage

? Likely we are listening on the wrong bands entirely. Perhaps the important messages zoom right through our bodies unreceived, undeciphered . . . perhaps this is our test

: to cross the threshold of self-destruction and level up to . . . what

? Ripples in space-time itself

Meanwhile our transmitters and receivers proliferate throughout the Anthropocene, infesting, messaging, accumulating in our hands, our pockets, and our landfills. Radio, telephone, television, cell phones, tablets. And everywhere WiFi. Or almost everywhere . . . and with the receivers, the Weirdness.

Our editors, Max and Lori, have risked soul and sanity to seek out these anomalies—tales of calls that shouldn’t come, programs best left unheard. The low end of the FM dial has always been a dangerous place, but some transmissions arrive on frequencies we can never measure or hope to block. Telephones, television, radio—all of them apertures for communication from Outside.