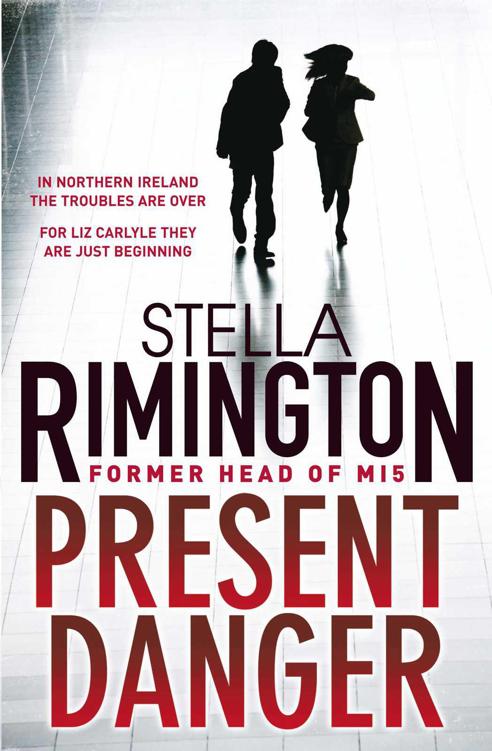 MI5 intelligence officer Liz Carlyle has just been despatched to Northern Ireland. It's a promotion, and she'll be running agents - her favourite activity - but it also means being separated from Charles Wetherby, her old boss, recently widowed and a very close friend. Attachments in the Intelligence Services are not encouraged: it seems her superiors know more about Liz's life than she thinks. In Belfast, Liz and her team are monitoring the brutal breakaway Republican groups who never accepted the peace process and want to continue their 'war'. Intelligence is focused on the shady Fraternity, with links to drug-running, arms-dealing and organised crime. With some help from Special Branch and a volunteer informant who seems to be legit, the Fraternity's leader is identified as a cold, calculating and ruthless American, hijacking the Cause for his own financial ends. It is a perilous group to become involved with. Especially if your informant turns tail...

MI5 intelligence officer Liz Carlyle has just been despatched to Northern Ireland. It’s a promotion, and she’ll be running agents - her favourite activity - but it also means being separated from Charles Wetherby, her old boss, recently widowed and a very close friend. Attachments in the Intelligence Services are not encouraged: it seems her superiors know more about Liz’s life than she thinks. In Belfast, Liz and her team are monitoring the brutal breakaway Republican groups who never accepted the peace process and want to continue their ‘war’. Intelligence is focused on the shady Fraternity, with links to drug-running, arms-dealing and organised crime. With some help from Special Branch and a volunteer informant who seems to be legit, the Fraternity’s leader is identified as a cold, calculating and ruthless American, hijacking the Cause for his own financial ends. It is a perilous group to become involved with. Especially if your informant turns tail…

‘The sense of being inside one of the great secret services of the world leaps from every page … This is a thriller with emotional tension rather than endless Boy’s Own machismo – and all the better for it.’

‘For a pacey page-turner, she’s a safe bet … Rimington is particularly strong in her accounts of procedure, unsurprisingly, given her past role as Head of MI5 … A guilty pleasure is the ongoing undercurrent of romance, and it’s hard not to wonder whether Carlyle will get her man out of office hours as well as in them.’

‘Stella Rimington is to political thrillers what Dick Francis is to race-horse ones, an expert in the field … she has carved out quite a niche exploring the post-Cold War landscape with lots of intelligence … racy stuff and gripping too.’

‘Stella Rimington has an easy style of writing that ensures you keep the pages turning … the plot is well-constructed, the characterization plausible and all threads of the story are neatly tied up. Plus the emotional angles of the various protagonists are explored in more depth than in many action thrillers.’

‘Another fast, action-packed thriller form the former head of MI5 … the quality of her writing is still very high and you know that you are going to have a very exciting read with her entertaining stories … the author did work for MI5 in Northern Ireland during her career and it adds an authenticity which is hard to ignore.’

Stella Rimington joined the Security Service (MI5) in 1968. During her career she worked in all the main fields of the Service: counter-subversion, counter-espionage and counter-terrorism. She was appointed Director General in 1992, the first woman to hold the post. She has written her autobiography,
Open Secret
, and four Liz Carlyle novels.
Present Danger
is her fifth Liz Carlyle novel. She lives in London and Norfolk.

Open Secret: The Autobiography of
the Former Director-General of MI5

The moral right of Stella Rimington to be
identified as the author of this work has been
asserted in accordance with the Copyright,
Designs and Patents Act, 1988.

All rights reserved. No part of this publication
may be reproduced or transmitted in any form
or by any means, electronic or mechanical,
including photocopy, recording, or any
information storage and retrieval system,
without permission in writing from the publisher.

This book is a work of fiction. Names, characters,
businesses, organizations, places and events are
either the product of the author’s imagination
or are used fictitiously. Any resemblance to
actual persons, living or dead, events or
locales is entirely coincidental.

To my granddaughter, Meena

Aidan Murphy was woken by a loud knocking on the door. He lay still, trying to decide whether he had a hangover or was just tired. There was another, louder knock. He rolled over and looked at the clock radio.
10:31
. Why didn’t his mother answer the door? The knocking turned into a hammering and someone was yelling his name.

He climbed out of bed, grabbed a T-shirt and underpants off the floor and went slowly downstairs. Two men were outside. The older one was Malone. The other he didn’t know. Heavy-set, with dark stubble and swarthy skin, he looked Spanish.

‘What, now?’ Aidan was confused. He was due at work at three –couldn’t it wait until then?

Aidan shrugged. ‘I’ll get dressed,’ he said, and went back upstairs to his bedroom. The second man stayed by the open door while Malone stood at the foot of the stairs, positioned where he could keep an eye on the door to Aidan’s bedroom.

What’s this about then? Aidan wondered, catching sight of his scrawny chest in the mirror. He felt a flicker of alarm. Stay calm, he told himself; you’ve done nothing wrong.

He threw on a shirt, a fresh one from the drawer, neatly ironed by his mother. There were benefits to living at home, even when you were twenty-three years old. He finished dressing, ran a comb through his hair, then grabbed a jacket and went downstairs.

He followed the stranger to a red Vauxhall Vectra with racing tyres, parked in front of the house. He didn’t like the way Malone walked close behind him. It reminded him too much of the time when as a kid he was arrested by the police for shoplifting. The two men got into the front seats, Malone driving. Aidan relaxed – if he was in trouble one of them would have sat in the back with him.

Malone pulled out sharply and they sped down the monotonous terrace of red brick houses, heading towards the city centre. Neither man spoke, and to break the silence, Aidan asked, ‘Did you see Celtic on the box?’ Malone shook his head, and the other man didn’t even do that. Sod them, thought Aidan, and he sat back silently with folded arms and looked out of the window.

They turned into Divis Street, past the flats where his father had died, shot in a stairwell by British soldiers. He’d been an IRA sniper, and he’d died doing his job. Aidan had wanted to follow his father into the Provos, to avenge his death by killing British soldiers, but they were on ceasefire now, so instead he’d found The Fraternity. Or they’d found him.

Dermot O’Reilly had recommended him – old Dermot, who had been interned in the Maze with Aidan’s father; Dermot, who had been tried twice on arms charges yet somehow had avoided another stretch in prison. There was no questioning
his
nationalist credentials, and when he’d said that The Fraternity wasn’t what it said it was, giving Aidan a wink, Aidan understood his meaning at once.

The Fraternity purported to be a ‘political consultancy’, which Aidan took as code for carrying on the fight. It put up a good enough phoney front, with smart new offices in the centre of town, and an Irish-American who called himself Piggott at its head, a strange man who had more degrees than you could shake a stick at.

Aidan soon learned that The Fraternity’s money-making business had nothing to do with consultancy, but everything to do with supplying: drugs, guns, even women. However much he tried to gild it, his own job was courier: he delivered packages to pubs, restaurants, bookmakers and sometimes private homes. From the bits and pieces he’d overheard from other members of The Fraternity, Aidan knew that he carried cocaine, ecstasy, methamphetamine, crystal meth and occasionally a gun, and on his return journeys, lots of cash in large, sealed, padded book bags, which he never, ever looked inside.

None of this had bothered him at first, since O’Reilly assured him these commercial transactions were funding other business – carrying on the war against Ireland’s enemies. But Aidan never got near to the real business, and he knew that his father, who like all good IRA men passionately disapproved of drugs, would have skinned him alive if he’d known what Aidan was up to. It must have been a great thing to have had a cause to die for.

They approached the usual turn to the office off Castle Street, but Malone drove straight on. ‘What’s going on?’ asked Aidan, unable to disguise the fear in his voice.

‘Relax kid,’ said Malone with a glance in his rear-view mirror. ‘We’ve got a bit of a drive. Sit back and enjoy it. They say the sun will be out soon.’

Some hope. It stayed grey and gloomy as they headed south on the dual carriageway. Where were they going? Aidan decided not to ask – he was pretty sure Malone would only tell him ‘wait and see’ – and then he remembered two of his colleagues mentioning that Piggott had a place down on the coast in County Down. One had been there to collect a shipment of ‘stuff’. It was an odd place for a Republican activist, if that’s what he was, for it was Protestant country; but perhaps chosen just because of that. It would be the last place the security people would expect to find him.

Aidan wasn’t scared. Why should he be? He’d done nothing wrong. Helping with the distribution of the goods, he had no responsibility other than to follow orders. Which he had been doing faithfully and without complaint. Well, almost. It was true he’d made it clear to some of his friends and associates that he wasn’t happy with The Fraternity. He’d told them it was all money-making and no action as far as he could see. But he’d been careful to whom he complained, just a few close mates in the back room of Paddy O’Brien’s pub. Dermot O’Reilly was sometimes there, but he could be trusted. O’Reilly couldn’t believe the war was over either. No, Aidan told himself now, even if he had opened his mouth, he’d been talking to friends who thought like he did.

Suddenly in the distance ahead he saw the Irish Sea, rocky outcrops and slits of sandy beach, the Mourne Mountains miles to their right, heavy and dark. They drove along the coast for several miles, through a grey stone village on a wide bay, its long street practically deserted, its ice-cream hut shut up for the winter.

At the end of the village the car slowed and turned sharply down a narrow track that skirted the bay. The tide was out, revealing a vast expanse of sand dune pockmarked by marram grass, the wet sand gleaming in the grey light. They crossed a narrow bridge and came up to a closed five-bar gate. Malone pressed a button on an electronic device he held in his hand and the gate creaked open, allowing them in to pass directly in front of a small, high-gabled Victorian house, the gatehouse to an estate that ran up the gentle slope of land away from the sea. Past the house, the road turned into a track and Malone drove slowly, his eyes intent on his rear-view mirror. Instinctively, Aidan looked behind him. There was no one following.