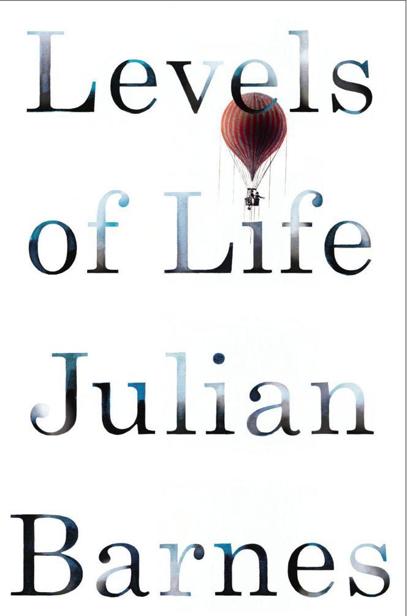 Julian Barnes, author of the Man Booker Prize–winning novel The Sense of an Ending, gives us his most powerfully moving book yet, beginning in the nineteenth century and leading seamlessly into an entirely personal account of loss—making
Levels of Life
an immediate classic on the subject of grief.
Levels of Life
is a book about ballooning, photography, love and loss; about putting two things, and two people, together, and about tearing them apart. One of the judges who awarded Barnes the 2011 Booker Prize described him as “an unparalleled magus of the heart.” This book confirms that opinion.
“Spare and beautiful...a book of rare intimacy and honesty about love and grief.  To read it is a privilege.  To have written it is astonishing.” —Ruth Scurr,
The Times of London

“A remarkable narrative that is as raw in its emotion as it is characteristically elegant in its execution.”  —Eileen Battersby,
The Irish Times

THE SIN OF HEIGHT

THE LOSS OF DEPTH

Julian Barnes’s new book is about ballooning, photography, love and grief; about putting two things, and two people, together, and about tearing them apart. One of the judges who awarded him the 2011 Man Booker Prize described him as ‘an unparalleled magus of the heart’. This book confirms that opinion.

Julian Barnes was born in Leicester and moved to London in 1946. He is the author of twenty books, and in 2011 won the Man Booker Prize for
The Sense of an Ending
. He met Pat Kavanagh in 1978

Pat Kavanagh was born in South Africa and moved to London in 1964. She worked in advertising and then, for forty years, as a literary agent. She married Julian Barnes in 1979, and died in 2008. 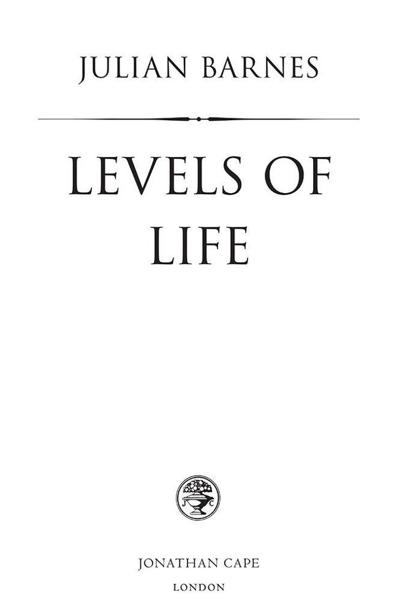 THE SIN OF HEIGHT

You put together two things that have not been put together before. And the world is changed. People may not notice at the time, but that doesn’t matter. The world has been changed nonetheless.

Colonel Fred Burnaby of the Royal Horse Guards, member of the Council of the Aeronautical Society, took off from the Dover Gasworks on the 23rd of March 1882, and landed halfway between Dieppe and Neufchâtel.

Sarah Bernhardt had taken off from the centre of Paris four years previously, and landed near Emerainville in the
département
of Seine-et-Marne.

Félix Tournachon had taken off from the Champ de Mars in Paris on the 18th of October 1863; after being driven east by a gale for seventeen hours, he crash-landed close to a railway line near Hanover.

Fred Burnaby travelled alone, in a red-and-yellow balloon called
The Eclipse
. Its basket was five feet long, three feet wide and three feet high. Burnaby weighed seventeen stone, wore a striped coat and a close skullcap, and to protect his neck from the sun made a puggaree of his handkerchief. He took with him two beef sandwiches, a bottle of Apollinaris mineral water, a barometer to measure altitude, a thermometer, compass, and a supply of cigars.

Sarah Bernhardt travelled with her artist–lover Georges Clairin and a professional aeronaut in an orange balloon called
Doña Sol
, after her current role at the Comédie-Française. At six thirty in the evening, an hour into their flight, the actress played mother, preparing
tartines de foie gras
. The aeronaut opened a bottle of champagne, firing the cork into the sky; Bernhardt drank from a silver goblet. Then they ate oranges and tossed the empty bottle into the Lake of Vincennes. In their sudden superiority, they cheerfully dropped ballast on to the groundlings below: a family of English tourists on the balcony of the Bastille Column; later, a wedding party enjoying a rural picnic.

Tournachon travelled with eight companions in an aerostat of his own boastful imagining: ‘I shall make a balloon – the Ultimate Balloon – of extraordinarily gigantic proportions, twenty times bigger than the biggest.’ He called it
The Giant
. It made five flights between 1863 and 1867. Passengers on this second flight included Tournachon’s wife Ernestine, the aeronaut brothers Louis and Jules Godard, and a descendant of the primal ballooning family of Montgolfier. It is not reported what food they took with them.

These were the balloon-going classes of the day: the enthusiastic English amateur, happy to be mocked as a ‘balloonatic’, and prepared to climb into anything about to become airborne; the most famous actress of her era, making a celebrity flight; and the professional balloonist who launched
The Giant
as a commercial venture. Two hundred thousand spectators watched its first ascent, for which thirteen passengers each paid one thousand francs; the aerostat’s cradle, which resembled a two-storey wicker cottage, contained a refreshment room, beds, a lavatory, a photographic department, and even a printing room to produce instant commemorative brochures.

The Godard brothers were everywhere. They designed and built
The Giant
, and after its first two flights brought it to London for exhibition at the Crystal Palace. Shortly afterwards a third brother, Eugène Godard, brought over an even bigger fire balloon, which made two ascents from Cremorne Gardens. Its cubic capacity was twice that of
The Giant
, while its straw-fed furnace, together with chimney, weighed 980 lb. On its first London flight, Eugène agreed to take one English passenger with him, at a charge of five pounds. That man was Fred Burnaby.

These balloonists happily conformed to national stereotype. Becalmed above the English Channel, Burnaby, ‘careless of the escaping gases’, lights a cigar to help him think. When two French fishing boats signal for him to descend and be picked up from the water, he responds ‘by dropping a copy of
The Times
for their edification’ – hinting, presumably, that a practical English officer can manage perfectly well by himself, thank you, Mossoo. Sarah Bernhardt confesses that she is temperamentally drawn to ballooning because ‘my dreamy nature would constantly transport me to the higher regions’. On her short flight she is provided with the convenience of a plain, straw-seated chair. When publishing her account of the adventure, Bernhardt whimsically opts to tell it from the chair’s point of view.

The aeronaut would descend from the heavens, look for a flat landing place, pull on the valve-line, throw out the grapnel, and often bounce forty or fifty feet back into the air before the flukes of the anchor took hold. Then the local population would come running. When Fred Burnaby landed near the Château de Montigny, an inquisitive rustic poked his head into the half-deflated gasbag, and nearly suffocated. The locals willingly helped collapse and fold the balloon; and Burnaby found these poor French labourers much kinder and more courteous than their English equivalents. He disbursed a half-sovereign in their direction, pedantically specifying the exchange rate at the time he had left Dover. A hospitable farmer, M Barthélemy Delanray, offered to put the aeronaut up for the night. First, though, came Mme Delanray’s dinner:
omelette aux oignons
, sautéed pigeon with chestnuts, vegetables, Neufchâtel cheese, cider, a bottle of Bordeaux and coffee. Afterwards, the village doctor arrived, and the butcher with a bottle of champagne. Burnaby lit a fireside cigar and reflected that ‘a balloon descent in Normandy was certainly preferable to one in Essex’.

Near Emerainville, the peasants who chased after the descending balloon marvelled to see that it contained a woman. Bernhardt was used to making entrances: did she ever make a grander one than this? She was, of course, recognised. The rustics duly entertained her with a drama of their own: the tale of a grisly murder recently committed just there, exactly where she sat (on her listening and narrating chair). Soon, it came on to rain; the actress, famous for her slimness, joked that she was too thin to get wet – she would simply slip between the drops. Then, after the ritual distribution of tips, the balloon and its crew were escorted to Emerainville station in time for the last train back to Paris.

They knew it was dangerous. Fred Burnaby nearly collided with the gasworks chimney shortly after take-off. The
Doña Sol
nearly came down in a wood shortly before landing. When
The Giant
crashed close to the railway line, the experienced Godards prudently jumped out before the final impact; Tournachon broke a leg, and his wife suffered injuries to her neck and chest. A gas balloon might explode; a fire balloon, unsurprisingly, could catch fire. Every take-off and landing was hazardous. Nor did larger mean safer: it meant – as the case of
The Giant
proved – more at the mercy of the wind. Early cross-Channel aeronauts often wore cork buoyancy jackets in case they landed on water. And there were no parachutes. In August 1786 – ballooning’s infancy – a young man had dropped to his death in Newcastle from a height of several hundred feet. He was one of those who held the balloon’s restraining ropes; when a gust of wind suddenly shifted the airbag, his companions let go, while he held on and was borne upwards. Then he fell back to earth. As one modern historian puts it: ‘The impact drove his legs into a flower bed as far as his knees, and ruptured his internal organs, which burst out on to the ground.’