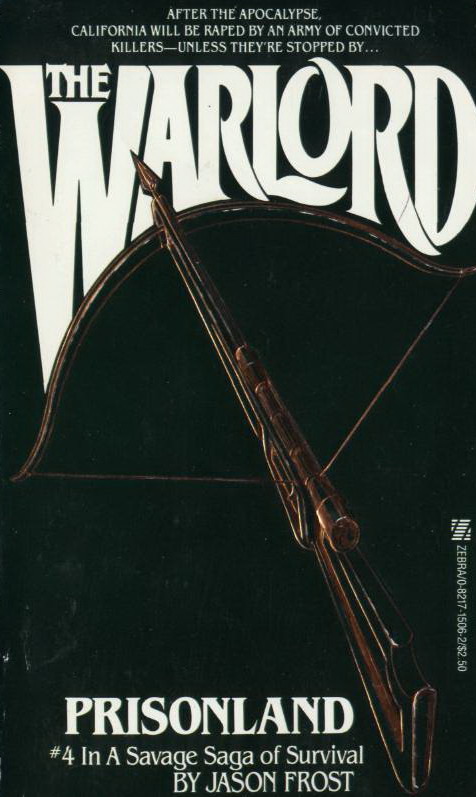 FIGHT TO THE FINISH

Eric Ravensmith leaned to the side, allowing Nestor’s fist to swoosh over his shoulder. Then he popped back in front of the big man, this time with two fingers pronged into a stiff V. He jabbed Nestor’s eyes, blinding him. Then Eric hooked the same two fingers into Nestor’s nostrils, yanking upward until the big man screamed. And now that the head was hinged backward, Ravensmith whipped his elbow into Nestor’s windpipe, sending him gagging to his knees.

But it still wasn’t over.

One of Nestor’s men sprang at Eric, his hand brandishing a Swiss army knife. Next to him, another of Nestor’s followers flicked open a straight razor, holding it like he knew how to use it.

They were closing in on him ...

The world’s gone mad with disruption. Isolated from help, the survivors face a state in which law is a memory and violence is the rule. Only one man is fit to lead the people, a man raised among the Indians and trained by the Marines. He is Erik Ravensmith, THE WARLORD—a deadly adversary and a hero of our times.

Though death sails the Sea of Los Angeles, there is only one man who will fight to save what is left of California’s ravaged paradise. His name is THE WARLORD—and he won’t stop until the job is done!

His son has been kidnapped by his worst enemy and THE WARLORD must fight a pack of killers to free him. Getting close enough to grab the boy will be nearly impossible—but then so is living in this tortured world!

Former inmates of San Quentin rule the ruins of San Francisco! When a small group of courageous women on the island fortress of Alcatraz makes a stand against the brutal reign of terror, there’s only one man brave enough to lead them—THE WARLORD!

Available wherever paperbacks are sold, or order direct from the Publisher. Send cover price plus $.50 per copy for mailing and handling to Zebra Books, 475 Park Avenue South, New York, N. Y 10016. DO NOT SEND CASH.

To THE WARLORDS, mercenaries of volleyball:

Book One
THE LAND OF HUNTERS

We live as we dream — alone
.
Joseph Conrad

Two days ago he had killed a family of four over half a box of cereal. Tonight he stared at his cards and hummed the theme to
Hawaii Five-O
.

“How much longer?” one of other men demanded.

“Rush you?” the first man spat. “You’ve been sitting and staring at those damn cards for ten minutes. Shit, my ex-wife took less time having her kid.”

“Probably because you took less time making it.” Dodd laughed at his own joke. “Like I said, don’t rush me. Rush a guy, he gets confused. Gets confused, makes mistakes. Am I right?” He snatched one card from his hand and stuck it between two other cards. Then he frowned and moved it back to where it had been.

One of the other players, Krimm, threw a gnarled hunk of wood onto the campfire beside them. Sparks sputtered high into the night air, glowing brightly from the sudden rush of oxygen, and sprinkled down like fiery snow on the circle of six men. Krimm sighed. “C’mon, Dodd, bet or fold or pass. Do
something
. This is poker, not chess.”

“Poker, huh? No shit?” Dodd scratched at his beard, working two fingers into the black bushy mess as thick as tangled barbed wire, and plucked out a small brown bug. Its many legs wiggled like a rush hour crowd. He pinched it between his dirty fingers until it popped, then wiped the pulpy green remains off on his pants. A tiny insect leg still stuck to his thumbnail like a black whisker. “No hitchhikers,” he laughed.

The others didn’t see the humor; they wanted to play poker. There was a lot riding on this hand.

“Shit or get off the pot,” another player, Teasdale, barked.

Dodd ignored them, studying his cards again. Finally he shrugged and tossed them onto the ratty blanket on which they were all sitting crosslegged. “Sorry, boys, gotta fold these turtle turds.”

“Big surprise,” Teasdale snorted. He adjusted his glasses, which were held together at the bridge by a Band-aid.

Dodd leaned back against a pine tree, picking at his beard again, watching the others finish the hand. He grinned like a fox in a room full of blind chickens. He knew it was only a matter of time before everything they owned would be his. Like always.

Twenty yards behind the poker game, Eric Ravensmith balanced himself on two slender branches high up in the pine tree. Quietly he slid a wooden arrow along the brass groove of his cocked crossbow. He could pick Dodd off right now, plant a bolt deep in the bastard’s heart. But not yet. He still needed Dodd alive.