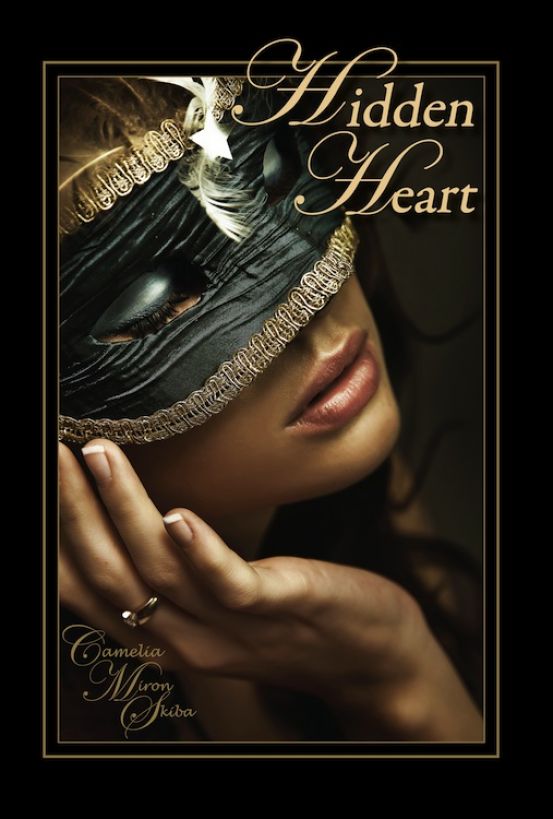 Available in print at
www.CameliaMironSkiba.com

This ebook is licensed for
your personal enjoyment only. This ebook may not be re-sold or
given away to other people. Thank you for respecting the hard work
of this author.

This book is a work of
fiction. Any similarities to actual persons, living or dead, real
places or events are entirely coincidental. All characters, places
and events are products of the author’s imagination.

A
sudden burst of heat spread through Tessa’s body causing her
skin to tingle. The air gondola rattled and stopped midway to the
station. Mount Etna’s rocky southeast slope overshadowed on the
right side as another earthquake caused people inside to bounce
around and struggle to stand up.

Nice birthday
present
,
Tessa
. She looked around the small
cabin. Six people, herself included, remained paralyzed in the
cramped space and the look on each face spoke a thousand words.
Sheer terror. Behind their air gondola, others jerked and bounced
left and right in a suspended dance. From her spot at the front of
the cabin she saw the cable car carrying her group of friends
stopped at the bottom end-station. They looked so tiny in the
distance.

At least they’re all
safe
. She could’ve kicked herself for
giving up her place in the other cabin; she would’ve been safely on
the ground now. But once again she had hastily stepped aside for a
couple to be together. Too late for regrets now; she forced herself
to stay calm.

The confined space appeared
bigger with everyone glued to the windows and staring at the rift
below. Dense birch trees would make their recovery
harder—
if
the
cable broke and the sky gondola tumbled to the ground.
Breathe. In and out, everything will be all
right.
Another violent earthquake and the
cabin rocked far to the right, then to the left as people collapsed
on top of each other and screams pierced the air.

Tessa struggled to keep her
balance; her arms beat the air, in search of something to grab.
Someone’s shirt was the only thing handy. It covered the hardest
chest she’d ever felt, on a man who seemed a giant in contrast to
the small space. The cabin swayed again and Tessa slid towards the
opposite side. A strong hand reached out and pulled her back. She
felt as if her shoulder dislocated. Sharp pain and a burning
sensation spread down her arm, but she didn’t let go. A stranger’s
embrace, thousands of meters above ground felt, oddly enough,
safe.

“
Perdonami
,” whispered a rich voice at
her temple, a worried expression pasted across the man’s face. His
black gaze bore in to her eyes searching for signs of
pain.

The cabin grunted, and for
a split second it felt as if the cable snapped. It bounced up and
down, then regained its floating position.
This is it, I’m going to die
. Scared
out of her senses, Tessa threw her arms around the man’s neck and
held her breath.
His left hand held onto
the metal bar while his right hugged her waist firmly against his
body.

At least I’ll die in
someone’s arms
. She dug-in closer. She
didn’t care if it was appropriate or not. When she felt his embrace
loosening, she tightened her grip around his neck.

“
Please, don’t let go of
me,” Tessa murmured, eyes shut tight, her heart racing. As fear
engulfed her, a second round of adrenaline spread through her
body.

“
Piano, bella. Sei al
sicuro
,” the stranger whispered at her
temple. Whatever he said, his voice had a calming effect on her
nerves while his hand moved up and down on her lower back as if to
prove she was safe.

Time stood still—no one
moved. Life stopped—no one spoke. How long since their lives were
tossed around like dice across a craps table? A minute? Maybe two,
three? It felt like the end would come any moment.

Finally, the cable car
began to move painfully slow and ten minutes later, they arrived at
the base of Mount Etna. The cable car’s doors opened with a
clicking sound. In their hurry to leave, people pushed one another
and rushed to exit the minute they stepped on safe ground. Aligned
vans and buses filled quickly with tourists and then sped away the
minute everyone was on board.

With shaky steps, Tessa
walked the short distance to where her friends waited anxiously for
her.
I can’t believe I’m still
alive!

“
Thank God, you are safe.”
Isabella pulled her into a hug. The group circled Tessa and they
all spoke at the same time.

When Carlo’s turn came, he
hugged her and claimed, “
Cara
mia
, I would’ve died of misery if something
would’ve happened to you.”

Tessa smiled and rolled her
eyes. She looked over Carlo’s shoulder at Lara, his pregnant wife
and winked at her. “I bet your wife would’ve comforted you,
silly!”

Their van hummed, ready to
follow the others. So far this trip had turned out to be her most
adventurous—ever. Her thirtieth birthday would definitely be
something to talk about for years to come.

“
I’ll have two drinks in
your honor, Tessa; one for your birthday and one for surviving that
nightmare.” Antonio hugged her tight, and then returned to his
fiancée’s, Isabella, side.

Tessa felt grateful to have
such caring friends. They were all Italians and some of them lived
nearby, in the little medieval town called Zafferana Etnea, where
earthquakes happened frequently. The villagers and tour guides were
used to feeling the earth rattling underneath their feet. But for
tourists it wasn’t easy, especially stranded in some cable car
thousands of meters above the ground.

“
Okay, now that we’ve
survived, let’s get you to the hotel. We still have a party to go
to, right?” Always levelheaded, Antonio took command and the group
started for the van. But before Tessa climbed in, she saw her
rescuer walking towards another van.

He towered above all other
tourists. His rigid, angular jaw softened when he caught her eyes.
He pushed a hand through his dark and rebellious, shoulder-length
hair and then raised a hand in a shy wave.

She ran to him, threw her
arms around his neck and placed a quick kiss on his left cheek.
“Thank you for saving me. Too bad I don’t speak Italian. I would’ve
invited you for a glass of champagne, even danced with you and
spent the night in your arms.” She smiled then ran back to her
friends. She wiped off her sweaty hands on her jeans and wished her
heartbeat would calm down.
I must be
losing my mind; that was waaay out of character for me.
She took her seat in the van, shrugged one
shoulder and giggled against her palms.

“
Wow, who is that?”
Isabella asked while the guys in their group whistled
approvingly.

Tessa struck a theatrical
pose with arms raised in the air, then placed them on top of each
other on her chest. “My hero.”

The van drove away the
minute its doors closed behind the last tourist.

Alessandro entered his
hotel room.
How strange. I almost forgot
how it feels to hold a woman—and such a beautiful woman.
He turned on his laptop and scanned the hundred
thirty-seven new messages in the inbox. Several of them required
immediate reply, but he couldn’t concentrate on the emails; his
thought drifted to the cable car and the near death
experience.

Frightening
.
Another brush with death
. He stood,
closed his laptop and walked to the little fridge. A cold beer
would settle his nerves.

He opened the double doors
to the small balcony and leaned against the handrail. He watched as
another van stopped in front of the hotel and more tourists
descended. The beauty from the cable car, laughing with her
friends, stepped from the van and gracefully walked toward the
hotel. The light August breeze carried the sound of her spirited
laugh as she disappeared inside the hotel.

Alessandro came to Sicily
determined to let go… to say goodbye. He made a promise long ago
and finally felt he had the strength to keep his word. When he
spread Rafaela’s ashes that afternoon atop the mountain his heart
felt lighter, but his soul still ached with the emptiness he had
endured the past two years, six months and twenty-four days.
Is it ever going to be easier?

He retreated to the room
and tried to focus on work, but once again his thoughts slid
sideways. That woman inside the cable car…her coffee-brown, wavy
hair spilled over his arm and the feel of its silkiness against his
skin…her shimmering, green eyes shaded by thick eyelashes and her
honey tinted full lips…her breasts pressed firmly against his lower
ribs, molding like a glove…
This is total
insanity! What’s happening to me?

Maybe a shower would help,
a cold one for sure. Alessandro went to the bathroom and turned on
the water. As he undressed, her scent filled his senses.
Man, she smelled so good!
Her smell, a mixture of Jasmine and Sicilian oranges had
impregnated his shirt. A smell he’d recognize even
blindfolded.
Lord, have mercy!
Coldwater jets whipped at him. He needed to cool
off not just his body but also his mind.

It seemed this
woman—whoever she was—sparked a desire he wasn’t prepared to ever
feel again, needs he didn’t want to think he had and thoughts he
didn’t want to deal with.

“
Hey, Tessa, guess who’s
here?” Carlo leaned her way, pointed towards the bar and saluted
someone.

“
What are you talking
about?” Tessa shouted over the pounding of the Latino music.
Colored light flashed to the rhythm of the music, making
recognizing anyone impossible.

“
Look, your hero at the
bar, on the left. We should invite him to join us.”

“
You’re crazy, I don’t
really know him. He just happened to be in the same cable car and
saved me from crashing into the other people.”

“
He saved your life, how
romantic!” Isabella fluttered her eyelashes, clapped her hands and
giggled.

“
Oh, come on, let’s
introduce the two of you!” Carlo stood, but Tessa immediately
pulled him down next to her.

“
Silly, I don’t need you to
be my matchmaker, thank you very much.” She felt her cheeks blush
at the foolish idea.

“
Why not? Are you still
moping after that
mascalzone?
Daniel never deserved you.”

“
Isabella, I’m not moping.
What do you want me to do with the guy? How am I supposed to
understand him? I don’t speak Italian.”

“
You are single now, why
not have fun? Turning thirty means you should do something crazy.”
Isabella leaned forward and wiggled her eyebrows. She waved
again.

This time she caught the
stranger’s attention. He waved back. Mortified, Tessa tried to
slide down in her chair. Did he see her?

“
Isa, leave her alone.
She’ll find someone when she’s ready. You are a bad girl and you
deserve a spanking.” Antonio pointed a finger at his fiancé and
inclined his head.

Outside the club, the
evening’s gentle summer wind carried the exhilarating music into
the surrounding garden. Mount Etna’s heavy breathing could be
clearly seen and the mountain reflected its grandiose height
against the dark horizon. A pale moon and sparse lanterns gave the
night a mysterious glow and the atmosphere seemed sexually charged;
people kissed, touched, whispered, laughed.

War: What is it good for? by Ian Morris
Cambridge Blue by Alison Bruce
Sweetblood 02.5 - Enchanted by Blood by Laurie London
Love in the Air by Nan Ryan
Antic Hay by Aldous Huxley
Tomorrow's Paradise World: Colonize by Armstrong, Charles W.
The Sextet - Dirty Dancing [The Sextet Anthology, Volume 2] (Siren Publishing Ménage Everlasting) by The Sextet
The Man Who Melted by Jack Dann
The End of the Game by Sheri S. Tepper
Bound for Keeps (Men of Honor) by Jakes, SE