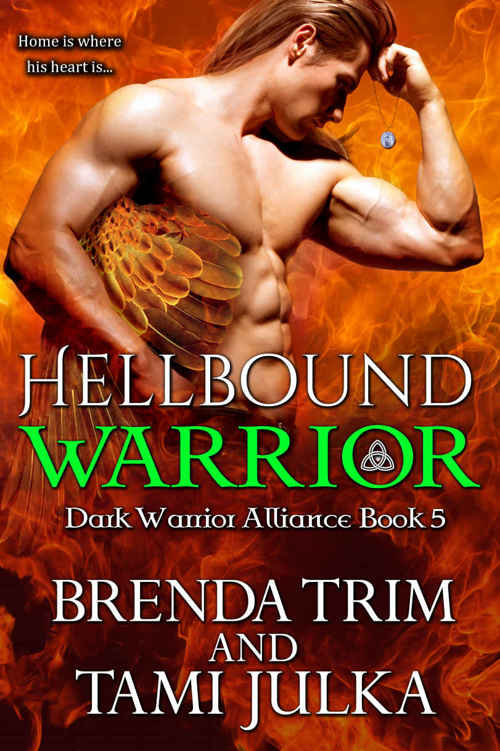 This book is a work of fiction. The names, characters, places, and incidents are products of the writers’ imagination or have been used fictitiously and are not to be construed as real. Any resemblance to persons, living or dead, actual events, locales or organizations is entirely coincidental.

All rights reserved. With the exception of quotes used in reviews, this book may not be reproduced or used in whole or in part by any means existing without written permission from the authors.

With heartfelt gratitude, we want to thank our readers. So many have reached out and connected with us and we appreciate it more than you know. This wonderful and exciting journey has brought new people into our lives that we now consider friends. You’ve embraced our Dark Warriors, as well as, the two of us, and our lives are now richer because of you!

“This is your last chance to back oot,” the Vampire King offered Rhys. Rhys was no an idiot and backing out wasn’t an option. The Triskele Amulet had been stolen by that piece of shit, Kadir, and Lucifer was on the verge of being released from his frozen prison in the Ninth Circle of Hell. So, unless Rhys wanted his home to be turned into the devil’s playground, he was going.

“This is more dangerous than anything you’ve ever done. Shite, I doona think anyone in the history of the Tehrex Realm has had a more treacherous mission,” Zander continued, locking eyes with Rhys. The concern was clear in Zander’s blue gaze, but it wasn’t because the leader of the Dark Warriors didn’t believe in Rhys. It was because he didn’t want to lose a member of their family.

The Vampire King had recruited Rhys to join the Dark Warriors a little over a century ago, after Rhys had escaped his father’s clutches. Rhys had never wanted to go back to the Underworld where his father had tried to rear him like a proper cambion.

Rhys’ father supported the idea of releasing the inner beast, giving it free rein. When Rhys had defied his father, he was cast into the dungeons, forcing his demon to the surface. And, that wasn’t the worst part. Instead of throwing willing, or unwilling, females as his victims, his father had thrown males in the dungeon as his bedfellows.

Many cambions enjoyed sex with both species, but Rhys wasn’t sexually attracted to men. It disgusted him to have sex with the males, but he had to do what was necessary. Otherwise, his rational mind would’ve been lost to him forever. Ultimately, he had forced himself on the males countless times and the memories still had bile rising in his throat.

Eventually, he had escaped, leaving that world behind, but he loathed his father and didn’t know what might happen if he saw him again. He could only hope to slip through his father’s realm and avoid that confrontation.

Shoving those darkest memories back into his steel-lined box, Rhys wondered what Zander had seen in him all those years ago to give him a place in his most trusted circle. When they first met, Rhys was had been a wreck. He had never been at a lower point in his life. Zander was the only being that knew about Rhys’ suffering when he had been with dear-old-dad and still the male had believed in him. No way was he going to fail when so much was riding on his success.

Rhys found a home and family within Zeum’s walls and would do anything to protect those he loved, even if it meant returning to the one place he swore to never go again. Rhys was a Dark Warrior now, not a low-life demon and his fellow warriors and their mates accepted Rhys for who and that meant more to him than anything.

Rhys rubbed his chin and let his breath out in a long hiss before responding, “Fuck no, I’m not sure, but I’m the only one who can go.” He wished they could send a legion of warriors on the mission, it would certainly make Rhys feel better about their chances, but the fact was that only those with demon blood could pass through the veil.

“I would never send Dante alone. After the Rowan sisters locate the cave, we need to find out if there is another warrior in the area that would be willing to go, as well. Preferably a female that can keep our demons fed,” Rhys finished. Rhys liked Dante, but he had no desire to have sex with the Lord of all cambions. The thought alone had the locks on his steel-lined box rattling in the back of his mind.

He supposed he could go to some of the females he had spent time with when he lived there in order to feed his demon. Surely, there were still some that held enough affection for him to keep his presence secret from his father. He couldn’t go without sex for long so when they passed through his father’s territory, this would become a much bigger issue. Without sex to calm and placate his inner beast, their mission would become secondary to seeking sexual gratification. His stomach turned. He hated the lengths to which his inner beast would go in order to have his carnal needs met.

Zander ran a hand through his shoulder-length black hair. “Shite, I hadna thought of your demon’s needs. That complicates matters. I still think we need to send every cambion warrior who’s ever been to Hell. Three seems like an insignificant number when faced with the multitudes you will encounter.” Zander was wearing a path in the rug with his pacing.

The Vampire King continued, “You will be on Lucifer’s turf, and more than likely he already has the amulet. We should operate under the assumption that he has been freed from Lake Crocytus and is searching for a way to get to earth.” Zander’s Scottish accent became thicker when he was agitated and right now he was on the brink of violence. His Fated Mate, Elsie, was pregnant, and, if worrying about them wasn’t enough, he also had an entire realm relying on him to keep them safe.

Rhys smiled wryly at Zander. He dreaded the idea of doing this without having his closest friends at his back, especially Gerrick. Fuck, the more he considered it, the more he realized that it was going to be odd not having him there now. He and Gerrick had been patrolling and fighting together for nearly a century. He knew what to expect from Gerrick and they fought seamlessly together. Gerrick was newly mated and Rhys could see how mating had softened the male, but he was still the most ruthless warrior ever born.

He scanned the media room and looked at each of the Dark Warriors.

Even if it were possible for them to get through the portal, Rhys wouldn’t want any of them to go. They were his only family and he would die to protect them.

“We have no way of knowing where Lucifer currently is, but the last thing we need is to send a bunch of pissed off cambions into Hell. Not only will it do nothing to help us face and pass the trials of each circle, but it will also paint a target on our backs. Traveling in small numbers means that we can slip through virtually unnoticed,” Rhys added.

Zander sighed and shook his head. Yeah, Rhys could relate, he was already exhausted and he hadn’t even started yet. He was so over the shit with the demons and skirm. They’d been fighting to protect the humans and realm for centuries, but lately it seemed as if things had compounded with them on the losing side of this war.

Ever since Elsie’s first husband had been murdered the demons had been taking more and more chances. They had been turning skirm without care, kidnapping human and supernatural females, and bringing lesser demons through the veil to earth in droves.

Never before had the archdemons taken such chances. In the past, they hadn’t wanted to add the humans to their list of enemies. The supernatural population was miniscule compared to the human one. The demons couldn’t take the risk of the humans hunting and eradicating them. At least, not until Lucifer was able to obliterate the veil and lead his countless hoards through.

It chapped Rhys’ ass that Lucifer’s efforts had finally paid off, and the archdemons had been able to confiscate the Triskele Amulet. Zander and his family had kept the amulet safe for eons until Kadir’s claws had literally been held to Elsie’s pregnant belly, threatening the heir to the Vampire throne, and Zander had been forced to give up the amulet to save them both.

Now, it fell to Rhys and Dante to retrieve the necklace before Lucifer put it to use. Nothing like having the fate of the world on your shoulders, Rhys mused, refusing to contemplate their chances of success. The odds were against them, but they had to try. Rhys grabbed his collar and tugged, the pressure of the task at hand suffocating him.

Rolling his shoulders to dissipate some of the tension, he realized he’d been on edge for weeks, and it had only gotten worse. Not only was he facing the impossible, he was unable to stop thinking about the angry angels who’d cornered him weeks before, accusing him of kidnapping their sister.

The idea was fucking ridiculous. Rhys loved females and enjoyed their soft bodies as often as possible, but he’d never resort to holding one captive just to meet his base needs. He wasn’t a total bastard. And, it infuriated him that those haughty angels had asserted that she was connected to him.