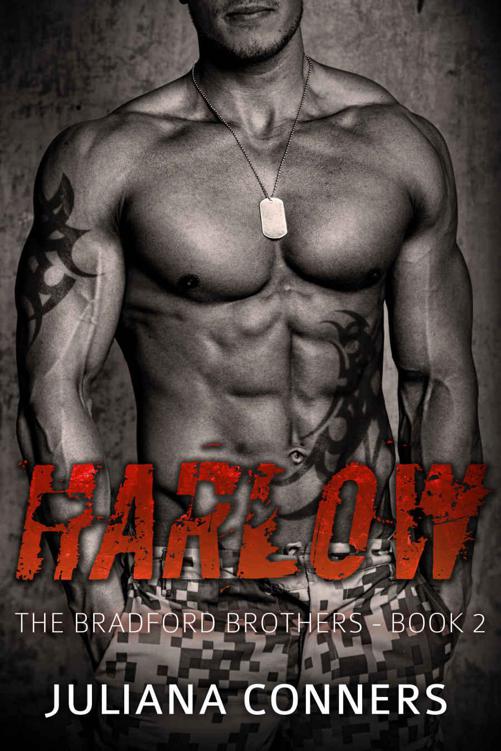 Book # 2 in the
Bradford Brothers
Series

To view the rest of Juliana Conners’ Amazon catalog,
click here
or go to:
http://hyperurl.co/JCAuthorCentral

This book is a work of fiction and any similarities to real places, people or events are entirely coincidental. This book may not be reproduced or distributed in any format except for short quotes for review purposes, without the express written consent of the author.

This Limited Release Bonus Edition of
Harlow
contains a free copy of
Jensen
, Book # 1 in
The Bradford Brothers
Series.

To Matt,
without whom Harlow would not be complete,
and neither would I.

Want a chance to win an Amazon gift card?

Other Books in
The Bradford Brothers
Series

Our Boeing CH-47 Chinook is barely off the ground before all of us within it begin celebrating.

“Yeah buddy!” My brother Jensen shouts, high- fiving everyone around before swooping me up in an exuberant hug.

“We did it!” shouted my other brother Ramsey, but the smoke that still fills his lungs forces him to cough out the last part of the exclamation.

We’ve just successfully extracted eight downed servicemen from behind enemy lines in southeastern Afghanistan. Their plane had been shot down by a surface- to- air missile. Without us rescuing them from hostile territory they’d likely have been captured and taken as prisoners as war.

“And this is why we do the things we do!” shouted Brian, a team member who isn’t my literal, blood brother like Jensen and Ramsey are, but one who has become a figurative brother— just as all the men in my unit have become. “That others may live!”

Several other men began chanting our motto along with him.

As pararescuemen, we’re special operators within the Air Force Combat Search and Rescue team. And we spend years training for rescue missions such as these. It’s our whole job: for every helicopter that goes down, a team must go into that same hostile territory to rescue and medically treat the downed crew.

We’re part of the Guardian Angel Weapon Systems, and we do whatever it takes to rescue even one downed service member. In fact, we’re the only unit the Department of Defense has designated to rescue and recover such service members when they’re trapped behind enemy lines. It’s nice to know that our hard work and perseverance have paid off, and that once again we’ve rescued American lives.

As my brothers in arms continue to celebrate, and I chant along with them, I can’t help but feel a sense of foreboding. I hear shots being fired in the distance, and think of how we’ve been warned that rescue helicopters and their crews often come under fire during or immediately after their rescue efforts.

“Are we completely in the clear yet?” I ask Jensen, looking out the window at the smoldering scene below us.

It’s only getting more dangerous out here: insurgents lay ambushes and place bombs or other devices that specifically target rescue teams. We call these “SAR traps”: Search and Rescue traps.

“Lighten up, little brother,” Jensen says, playfully punching me on the shoulder.

“Seriously, Harlow,” says Ramsey. “You did well, and it’s time to celebrate.”

Fuck it. If everyone else is in good spirits, I might as well make sure to shift mine to match theirs.

They soon join me but my voice is louder and stronger than the others, who had been repeating the phrase for quite a while now, while I was brooding. I’m on a roll, swept up by the momentum and exhilaration we’re all feeling.

And then it happens.

Our helicopter is spinning out of control, being downed just as certainly as the one from which we just rescued the eight other men.

“We’ve been shot down!” someone yells.

This obvious statement is the last thing I hear for a while.

I come to in the aircraft that is now flaming and downed. I see an uncountable number of unconscious people in the helicopter, so I spring to action, extricating them from the burning wreckage.

There are many limp bodies, but I don’t see theirs among them. Although amidst the flames I can barely make out who’s who, I’m certain I could recognize my own brothers, whom I’ve known since I was born. I can only hope the fact that I don’t see them in this pile of wreckage means that they’re among the men helping to rescue others, as I myself am doing.

Those of us who are conscious work to remove those who are unconscious, without looking at or talking to each other. We’re simply determined to save lives before we run out of time. Time until the aircraft explodes. Time until the enemy shows up…

In the back of my mind I fear captivity and torture, and I can’t help but hope that someone just like me is on the way to save us. There’s not much time for fear, though, and pure adrenaline keeps me working like a madmen to scoop up the bodies out of the plane before…

I’m trapped, I can feel that my flesh is on fire, and I’m certain I’m headed to hell. Guys like me aren’t likely to be welcome in heaven. Sure, I’m a hero for what I do professionally, but the same can’t be said about my personal life.

I blink and call out my brothers’ names, desperately searching for them in the hopes that I can find them before I lose consciousness…

Intelligent Design: Revelations to Apocalypse by J. M. Erickson
Ask Me Why I Hurt by Randy Christensen, M.D.
Final Protocol by J. C. Daniels
Sleepless (Curse of the Blood Fox Trilogy, Book #1) by Sera Ashling
Rapturous Rakes Bundle by Diane Gaston, Nicola Cornick, Georgina Devon
When the Heart Falls by Kimberly Lewis
Boots on the Ground: Homefront, Book 1 by Rebecca Crowley
Constable on the Hill by Nicholas Rhea
The Book of Honor by Ted Gup
Mine: Black Sparks MC by Glass, Evelyn