Read Everything I Never Told You Online

Everything I Never Told You 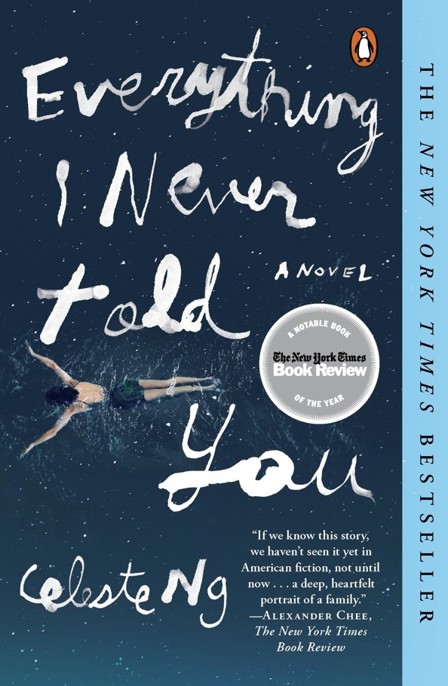 First published by The Penguin Press, a member of Penguin Group (USA) LLC, 2014

Everything I never told you : a novel / Celeste Ng.

Lydia is dead. But they don’t know this yet. 1977, May 3, six thirty in the morning, no one knows anything but this innocuous fact: Lydia is late for breakfast. As always, next to her cereal bowl, her mother has placed a sharpened pencil and Lydia’s physics homework, six problems flagged with small ticks. Driving to work, Lydia’s father nudges the dial toward WXKP, Northwest Ohio’s Best News Source, vexed by the crackles of static. On the stairs, Lydia’s brother yawns, still twined in the tail end of his dream. And in her chair in the corner of the kitchen, Lydia’s sister hunches moon-eyed over her cornflakes, sucking them to pieces one by one, waiting for Lydia to appear. It’s she who says, at last, “Lydia’s taking a long time today.”

Upstairs, Marilyn opens her daughter’s door and sees the bed unslept in: neat hospital corners still pleated beneath the comforter, pillow still fluffed and convex. Nothing seems out of place. Mustard-colored corduroys tangled on the floor, a single rainbow-striped sock. A row of science fair ribbons on the wall, a postcard of Einstein. Lydia’s duffel bag crumpled on the floor of the closet. Lydia’s green bookbag slouched against her desk. Lydia’s bottle of Baby Soft atop the dresser, a sweet, powdery, loved-baby scent still in the air. But no Lydia.

Marilyn closes her eyes. Maybe, when she opens them, Lydia will be there, covers pulled over her head as usual, wisps of hair trailing from beneath. A grumpy lump bundled under the bedspread that she’d somehow missed before.
I was in the bathroom, Mom. I went downstairs for some water. I was lying right here all the time.
Of course, when she looks, nothing has changed. The closed curtains glow like a blank television screen.

Downstairs, she stops in the doorway of the kitchen, a hand on each side of the frame. Her silence says everything. “I’ll check outside,” she says at last. “Maybe for some reason—” She keeps her gaze trained on the floor as she heads for the front door, as if Lydia’s footprints might be crushed into the hall runner.

Nath says to Hannah, “She was in her room last night. I heard her radio playing. At eleven thirty.” He stops, remembering that he had not said goodnight.

“Can you be kidnapped if you’re sixteen?” Hannah asks.

Nath prods at his bowl with a spoon. Cornflakes wilt and sink into clouded milk.

Their mother steps back into the kitchen, and for one glorious fraction of a second Nath sighs with relief: there she is, Lydia, safe and sound. It happens sometimes—their faces are so alike you’d see one in the corner of your eye and mistake her for the other: the same elfish chin and high cheekbones and left-cheek dimple, the same thin-shouldered build. Only the hair color is different, Lydia’s ink-black instead of their mother’s honey-blond. He and Hannah take after their father—once a woman stopped the two of them in the grocery store and asked, “Chinese?” and when they said yes, not wanting to get into halves and wholes, she’d nodded sagely. “I knew it,” she said. “By the eyes.” She’d tugged the corner of each eye outward with a fingertip. But Lydia, defying genetics, somehow has her mother’s blue eyes, and they know this is one more reason she is their mother’s favorite. And their father’s, too.

Then Lydia raises one hand to her brow and becomes his mother again.

“The car’s still here,” she says, but Nath had known it would be. Lydia can’t drive; she doesn’t even have a learner’s permit yet. Last week she’d surprised them all by failing the exam, and their father wouldn’t even let her sit in the driver’s seat without it. Nath stirs his cereal, which has turned to sludge at the bottom of his bowl. The clock in the front hall ticks, then strikes seven thirty. No one moves.

“Are we still going to school today?” Hannah asks.

Marilyn hesitates. Then she goes to her purse and takes out her keychain with a show of efficiency. “You’ve both missed the bus. Nath, take my car and drop Hannah off on your way.” Then: “Don’t worry. We’ll find out what’s going on.” She doesn’t look at either of them. Neither looks at her.

When the children have gone, she takes a mug from the cupboard, trying to keep her hands still. Long ago, when Lydia was a baby, Marilyn had once left her in the living room, playing on a quilt, and went into the kitchen for a cup of tea. She had been only eleven months old. Marilyn took the kettle off the stove and turned to find Lydia standing in the doorway. She had started and set her hand down on the hot burner. A red, spiral welt rose on her palm, and she touched it to her lips and looked at her daughter through watering eyes. Standing there, Lydia was strangely alert, as if she were taking in the kitchen for the first time. Marilyn didn’t think about missing those first steps, or how grown up her daughter had become. The thought that flashed through her mind wasn’t
How did I miss it?
but
What else have you been hiding?
Nath had pulled up and wobbled and tipped over and toddled right in front of her, but she didn’t remember Lydia even beginning to stand. Yet she seemed so steady on her bare feet, tiny fingers just peeking from the ruffled sleeve of her romper. Marilyn often had her back turned, opening the refrigerator or turning over the laundry. Lydia could have begun walking weeks ago, while she was bent over a pot, and she would not have known.

She had scooped Lydia up and smoothed her hair and told her how clever she was, how proud her father would be when he came home. But she’d felt as if she’d found a locked door in a familiar room: Lydia, still small enough to cradle, had secrets. Marilyn might feed her and bathe her and coax her legs into pajama pants, but already parts of her life were curtained off. She kissed Lydia’s cheek and pulled her close, trying to warm herself against her daughter’s small body.

The high school’s number is pinned to the corkboard beside the refrigerator, and Marilyn pulls the card down and dials, twisting the cord around her finger while the phone rings.

“Middlewood High,” the secretary says on the fourth ring. “This is Dottie.”

She recalls Dottie: a woman built like a sofa cushion, who still wore her fading red hair in a beehive. “Good morning,” she begins, and falters. “Is my daughter in class this morning?”

Dottie makes a polite cluck of impatience. “To whom am I speaking, please?”

It takes her a moment to remember her own name. “Marilyn. Marilyn Lee. My daughter is Lydia Lee. Tenth grade.”

“Let me look up her schedule. First period—” A pause. “Eleventh-grade physics?”

“I’ll have someone run down to that classroom and check.” There’s a thud as the secretary sets the receiver down on the desk.

Marilyn studies her mug, the pool of water it has made on the counter. A few years ago, a little girl had crawled into a storage shed and suffocated. After that the police department sent a flyer to every house:
If your child is missing, look for him right away. Check washing machines and clothes dryers, automobile trunks, toolsheds, any places he might have crawled to hide. Call police immediately if your child cannot be found.

“Mrs. Lee?” the secretary says. “Your daughter was not in her first-period class. Are you calling to excuse her absence?”

Marilyn hangs up without replying. She replaces the phone number on the board, her damp fingers smudging the ink so that the digits blur as if in a strong wind, or underwater.

She checks every room, opening every closet. She peeks into the empty garage: nothing but an oil spot on the concrete and the faint, heady smell of gasoline. She’s not sure what she’s looking for: Incriminating footprints? A trail of breadcrumbs? When she was twelve, an older girl from her school had disappeared and turned up dead. Ginny Barron. She’d worn saddle shoes that Marilyn had desperately coveted. She’d gone to the store to buy cigarettes for her father, and two days later they found her body by the side of the road, halfway to Charlottesville, strangled and naked.

Now Marilyn’s mind begins to churn. The summer of Son of Sam has just begun—though the papers have only recently begun to call him by that name—and, even in Ohio, headlines blare the latest shooting. In a few months, the police will catch David Berkowitz, and the country will focus again on other things: the death of Elvis, the new Atari, Fonzie soaring over a shark. At this moment, though, when dark-haired New Yorkers are buying blond wigs, the world seems to Marilyn a terrifying and random place. Things like that don’t happen here, she reminds herself. Not in Middlewood, which calls itself a city but is really just a tiny college town of three thousand, where driving an hour gets you only to Toledo, where a Saturday night out means the roller rink or the bowling alley or the drive-in, where even Middlewood Lake, at the center of town, is really just a glorified pond. (She is wrong about this last one: it is a thousand feet across, and it is deep.) Still, the small of her back prickles, like beetles marching down her spine.

Inside, Marilyn pulls back the shower curtain, rings screeching against rod, and stares at the white curve of the bathtub. She searches all the cabinets in the kitchen. She looks inside the pantry, the coat closet, the oven. Then she opens the refrigerator and peers inside. Olives. Milk. A pink foam package of chicken, a head of iceberg, a cluster of jade-colored grapes. She touches the cool glass of the peanut butter jar and closes the door, shaking her head. As if Lydia would somehow be inside.

Morning sun fills the house, creamy as lemon chiffon, lighting the insides of cupboards and empty closets and clean, bare floors. Marilyn looks down at her hands, empty too and almost aglow in the sunlight. She lifts the phone and dials her husband’s number.

The Importance of Being Earnest by Oscar Wilde
As Love Shifts by Kat Barrett
Nobody's Child by Austin Boyd
Her Last Best Fling by Candace Havens
Whiskey Tango Foxtrot by David Shafer
First degree by David Rosenfelt
Full Moon by W.J. May
The Hills and the Valley by Janet Tanner
Song of Redemption by Lynn Austin
A Swift Pure Cry by Siobhan Dowd