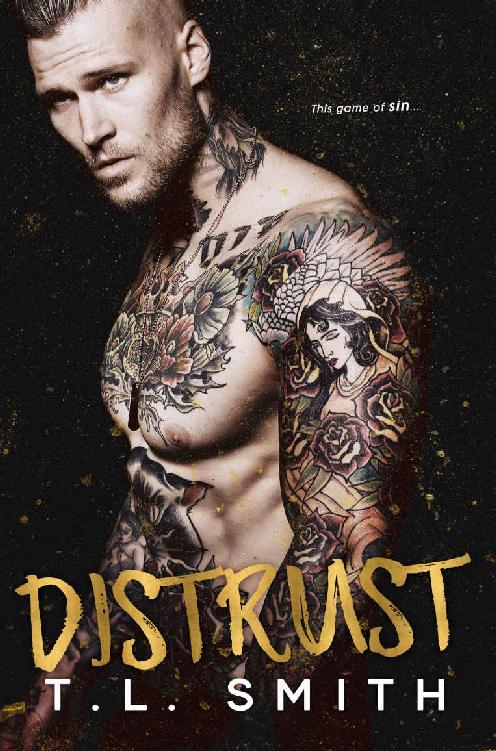 This book is a work of fiction. Any references to real events, real people, and real places are used fictitiously. Other names, characters, places, and incidents are products of the Author’s imagination and any resemblance to persons, living or dead, actual events, organizations or places is entirely coincidental.

All rights are reserved. This book is intended for the purchaser of this e-book ONLY. No part of this book may be reproduced or transmitted in any form or by any means, graphic, electronic, or mechanical, including photocopying, recording, taping, or by any information storage retrieval system, without the express written permission of the Author. All songs, song titles and lyrics contained in this book are the property of the respective songwriters and copyright holders.

This e-book contains sexually explicit scenes and adult language and may be considered offensive to some readers. This e-book is intended for adults ONLY. Please store your files wisely, where they cannot be accessed by under-aged readers.

Noun – The feeling that someone or something cannot be relied upon.

Verb – Doubt the honesty or reliability of; regard with suspicion.

She was a ghost, in heels.

She was there, then she wasn’t.

She would play with my emotions like a well-played guitar.

Then she would disappear. Making me want to strangle her.

Her lips were shaped like a heart, deceiving you at every word.

Her body was created straight from my fantasies, one I craved to bend to my will.

Her heart, well, who the hell knew. She kept that shit locked tight.

And I couldn’t find the key.

How many encounters, touches, shared looks, kisses, do you think it takes to know you love someone? Is it instant? Is it over a period of time? Is it when you know all the downs, plus the ups?

I didn’t know. All I knew was she was a bitch in heels, very sexy heels. She fucked with my emotions so bad, I wanted to strangle her every time she popped into my life, then fuck her senseless.

She wasn’t a constant, she was just there. When I least wanted her to be. Even when I thought I didn’t crave her, she knew better. She knew no matter what, if she were there, I would take what was given.

Her touch was my kryptonite, her hands my sin, her body my wild addiction. I couldn’t get enough and it was a problem. It would always be a problem. We don’t work. My life had plans, and I didn’t know hers. I was never given the opportunity to know hers. Her words were scripted, she knew what to say and when to say it. She never let much slip.

Even with all that I fell hard, for someone I wasn’t sure I should—scrap that, for someone I knew I shouldn’t have. But then again it was too late, from the minute I saw her I just didn’t realize that she would be my undoing.

I hated her with a passion. I craved her like a fire licking its flames. I wanted the need to burn out. We weren’t destined. I knew this. Except I wanted whatever she would give me, even if I had to take it.

I stood there like I was under a spell, staring down at her sleeping form. She was always gone when I awoke. It was like she knew the instant I was asleep.

She was completely bare, not even the sheet covered her. Her skin so soft, so smooth, I wanted to never stop running my hands over it. The first time I saw her, I knew I had to have her, by the second time I saw her I’d had her. But I think she had it planned all along. Like she was drawing me in, readying me for her. She didn’t need to, I wanted her the minute I saw her and I think I will for the rest of my life.

Elina moved in her sleep. Turning so she faced me, her golden eyes still closed, hidden from me. I stepped forward wanting to touch, to take every moment she gave me, and not waste it on sleep. My hand touched her ass, her eyes peeked up at me, those heart shaped lips smirked knowing exactly what I wanted. Her body turned so she was lying on her back, showcasing all of her. She was the most confident person I’d ever met in their own skin. I knew exactly why—it was utter perfection. I tried to find a flaw, every time, just to crack her charade. It had never happened. No matter how many times I’d had her in my bed or under me.

My knees touched the bed, my hands cupped her pussy, her back arched. She knew what was to come, and she was ready for it. She was my perfect fit. Pity I couldn’t keep her. Pity I couldn’t lock her away. I wanted to. I wanted that room, the one with a steel door and a throw away key. Because all she gave me was fragments. And it wasn’t enough, it would never be enough.

My cock’s had a dry spell, I fucking hate dry spells. I wanted to fuck, I wanted to fuck hard. I wanted to feel the warmth of woman’s pussy wrapped around my cock, stroking it, licking it, taking it, with everything she had. Not a single woman had ever satisfied all my needs, not one had made me crazy for them. And I’d had my fair share of women. I’d fucked all kinds, I didn’t discriminate. My cock didn’t see color, problems, or issues. All it craved was warmth. That’s not saying I didn’t have standards, I did. I didn’t just let any woman touch me, and I didn’t fuck every woman that approached, because a lot did. My name held power, women craved power.

Men hated those that had it. Especially my cousin, he hated me the most. And he should, I did fuck his wife after all. She was good, just not good enough to get shot over. Which also happened.

I stood there studying my cousin. His dark hair pulled back, the deep, jagged scar which ran the length of his eyebrow hid how deep the gash had been, and those very dark, intense eyes were trained on me. He didn’t expect to see me. This was, after all, his club. He was seated in a private booth, the only person around him was his whore of a wife, whose eyes were now blazing with lust and staring right at me. He noticed straight away, and I watched in fascination as his hand reached out and grabbed her bare thigh. She blushed knowing she’d been caught, then she turned to face her husband. His dark eyes come back to mine. He nodded his head to two of his men and they approached us with caution, knowing full well that I carried more than appearances showed, and my hands were my greatest weapon. I didn’t need a gun or even a knife. These hands could move faster than the eyes could keep track. Stephon knew this, hence the reason for his disfigured face.

“Gentlemen,” his men greeted us. Anton and Viktor stood on either side of me.

We were about to walk to Stephon’s table when something caught my eye, or should I say someone caught my eye. I waved for my men to continue, and realized right there and then that it was my first mistake to show weakness for someone. Not one woman had ever immobilized me before, until her. She was on the dance floor, a tight dress wrapped around her swaying hips, her hands up in the air, and her tits proudly on display. And every man that was close to her was watching, with their mouths open and tongues hanging out.

She had a whole section of the dance floor to herself. Her eyes were closed, not realizing all eyes were on her. And it was the sexiest thing I’d ever seen. I stood there, confused, wondering why I couldn’t just put one foot in front of another and make my way over to Stephon. After all, he was the reason I was here in the first place, to finish up loose ends.

All of a sudden, her eyes opened, but her hips continued to sway. And her eyes, those beautiful eyes, they looked straight at me.

We stood there, her dancing, me standing, only a few feet separated us. There were people between us, but none of that seemed to matter, all I could see was her.

A hand landed on my back, I broke eye contact and realized that I hadn’t moved for at least fifteen minutes. Viktor looked down at the beauty, then back to me. He nodded his head indicating it was time to go. I was about to say no, even knowing full well I couldn’t stay in that place, due to the danger that it held. When I turned back, she was gone, like she was never there.