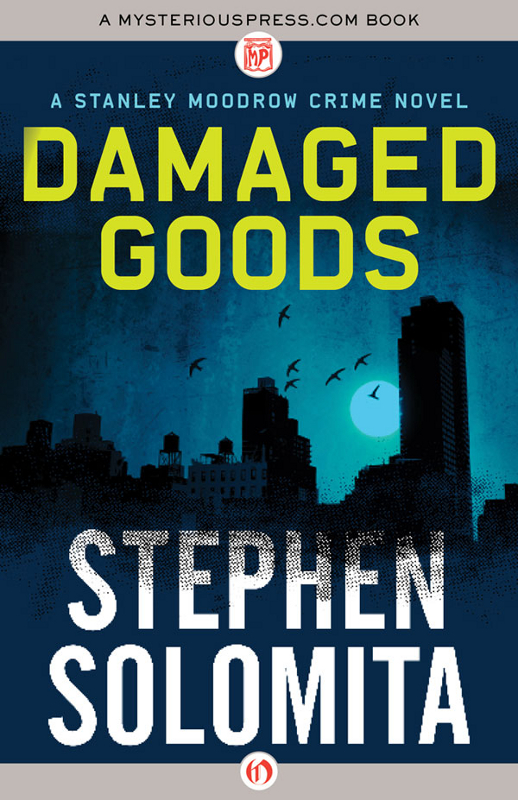 For Wally and Tina,

who will never grow old

This is a work of fiction, despite well-documented examples of witness-protected psychopaths violating the civil rights of unsuspecting neighbors. For instance, the address 671 East Tenth Street is not between Second and Third Avenues. It is actually in the East River. A word to the wiseguy.

G
ILDO (JILLY) SAPPONE WANTED
to see himself. That’s all. Just to look into a mirror on his day of liberation. He wasn’t asking for the moon. Wasn’t demanding a comb, a brush, or even a throwaway razor. He knew why the screws wouldn’t give him anything he could make into a weapon. That was natural; if he was in their place, it was exactly what he’d do. But the mirror wasn’t even glass; it was metal, and it was cemented to a recess in the wall, and you couldn’t get at it, nobody ever had. So why take it away?

Jilly ran his fingers through his beard, let his eyes take inventory. A steel bunk, a steel sink, a steel toilet; no desk, no books, no commissary. He had to brush his teeth with cold water, comb his hair with his fingers; he hadn’t made a phone call in months, or received a letter, or spoken to anyone but Deputy Warden James Cooney. And you couldn’t really call the dep’s visit a conversation.

Cooney had opened the slot in the door, announced the parole board’s reversal of its decision to keep Jilly Sappone in prison, added, “If it was up to me, you piece of shit, I would’a voted to put your ass up against a wall and shoot you. I would’a done it for the good of society. Now, I gotta let you go, but I’m telling you this, Sappone, give me any excuse, I’m gonna have an extraction team beat you into the hospital. That’ll give me a couple extra weeks to change the board’s mind.”

Jilly, struck dumb by the unexpected news, hadn’t registered the threat until after Cooney left. Which was just as well, because Jilly Sappone didn’t take to threats; threats usually made him go off right then and there. And he wasn’t afraid of a beating, either. That was why the system had finally shipped him off to Southport, New York’s only maxi-maxi prison. The COs had used fists in Attica, batons in Greenhaven, ax handles in Clinton; they’d locked him away in the hole for months at a time, but whenever he came out, somebody said something or did something or just looked at him out of the corner of an eye and …

But not this time. Cooney had turned on his heel and marched off down the catwalk; Jilly had paced (four steps to the rear, four steps to the front) the length of his cell while pondering the meaning of the dep’s visit. Thinking that maybe it was a joke. Thinking Southport was created for cons who couldn’t be controlled anywhere else in the system. If the New York State Department of Corrections had transferred Jilly Sappone’s miserable ass to a prison where they locked you in a cell for twenty-three hours a day, then systematically had withdrawn every privilege, including his blanket and mattress, there was no legit way the board could’ve voted to cut him loose.

The obvious answer was that Carmine Stettecase, who maybe had the juice, had somehow been persuaded to reach into the system, pluck him out. But that didn’t make sense because Carmine had dumped Jilly Sappone years before he got sent up. Never mind the fact that Carmine’s son was married to Aunt Josie’s daughter, Mary. Or that Aunt Josie had raised Jilly Sappone after his father got whacked. Blood didn’t mean shit to Carmine Stettecase.

“What you are, Jilly, is a bug.” Delivering it deadpan, voice as calm as the lead in a bullet before you pull the trigger. “Maybe it ain’t ya fault—I wouldn’t know about that—but a bug is what you are. I can’t send you out for coffee without ya goin’ off on the jerk behind the counter. Tell me, do I look like the fuckin’ janitor? Huh? You think I oughta be pushin’ a broom?”

Carmine had paused there, expecting an answer, but Jilly kept his eyes on the floor, figuring if he opened his mouth anything might come out. Knowing what would happen to him if he disrespected Carmine Stettecase.

“So, why the fuck,” Carmine had finally asked, “am I spendin’ all my time cleanin’ up ya goddamned messes? If I’m not a janitor?” Another pause, this one a lot shorter. “I don’t care what ya do with ya life, Jilly, but don’t do it on my turf. Ya fuck around down here, I’m gonna kill ya.”

Which, in a way, was exactly what he eventually did.

Jilly let his head and shoulders settle against the cool steel of his bunk. “Carmine,” he said out loud, “if you could only see me now.”

The joke was that he’d gotten worse, that he was barely in control from moment to moment, that his one hour a day out of the cell was an adventure for all concerned. The joke was that Jilly Sappone wasn’t going to make it on the outside and he knew it. He’d be lucky to last a month.

The doc had said it straight out. Doctor Bannerman. The bullet (not even a bullet, just a little piece of lead, a dozen milligrams at most) as it punched its way through his temple and down into the back of his brain, had left a trail of scar tissue behind. It had all happened a long, long time ago, but the memory lingered on.

“Think of it,” the doctor, standing on the far side of an inch-thick plastic partition, had explained, “as if someone had punched a hole in a pressure cooker. When the pressure builds up …”

He did think of it, of course. Had been seeing it in his dreams for more than thirty years. The shards of bloody glass sparkling in his lap, on his shoulders, in his hair. Daddy’s brains on the windshield, pink and wet. It wasn’t something you could forget about.

But it didn’t mean that he heard voices; it didn’t mean he saw monsters. No, the problem was that some little piece of bullshit a normal person would just find annoying set off bolts of lightning in Jilly Sappone’s mind. Shitstorm was the word he used to describe it to himself.

“It’s better if it ain’t Carmine,” he told the ceiling over his bunk. “Because, if it was Carmine, I couldn’t do what I gotta do.” He sat up on the bunk, shook his head, tapped his foot on the floor. “Aunt Josie,” he finally said. “You really gone and done it now.”

Because Josie Rizzo was the only person in the world who gave two shits about Jilly Sappone and Josie Rizzo
didn’t
have the juice.

No, if Josie Rizzo wanted her nephew out of jail, she’d have to make a deal. She’d have to trade something for her Jilly’s freedom and Josie Rizzo only had one thing to trade.

Jackson-Davis Wescott searched his face in the vanity mirror of Carlo Sappone’s 1984 Buick Regal as if trying to remember something. As if his features (if he could only assemble them, make a single image out of the puzzle) would reveal some obvious truth he’d once known, but had long forgotten. Though he’d never told anyone (not Aunt Josie and definitely not Jilly Sappone), he did this whenever he was alone. If there was no mirror handy, he’d find a chunk of chrome, a darkened window, a polished tabletop.

On this particular occasion, the day of Jilly Sappone’s liberation, Jackson-Davis raised the forefinger of his right hand and touched the individual parts of his face as if taking inventory. Assuring himself that it (or, he) was all there. First, he ran his finger from left to right across his ultrafine platinum hair and said, as he usually did, “Damn near to an albino.”

That was what his daddy had said whenever he’d taken young Jackson-Davis on his knee. His ole ma had called it “angel hair,” which was what Jackson-Davis said when he didn’t say “Damn near to an albino.”

From the part in his hair, he let his finger drop along his right cheek, down to a soft, flat jaw, then up to lips so thin they looked more like raised scar tissue than a real mouth.

“Maybe the reason,” he said, “the boy don’t talk much is that he ain’t got no mouth to speak with.”

Jackson-Davis couldn’t remember who’d first said that. Could’ve been his ole ma
or
his daddy. Or maybe even Reverend Lucas Barr down at the Gethsemane Pentecostal Church. Jackson’s ole ma had been real keen for the Pentecostal message, had called on Reverend Luke for all kinds of advice.

Then one day Jackson’s daddy had caught Martha trusting in the Lord’s messenger. Jackson-Davis had been with his daddy on that afternoon, had seen his mother try to run, seen her panties catch at her ankles, seen his daddy’s boots come down on his old ma’s back while Reverend Luke’s white moon of a butt flew out the window.

“Hell’s bells,” his father said whenever he was drunk (which was every Friday night and all through the weekend), “if I would’a had me a pistol, I would’a got that preacher sunabitch, too.”

Jackson-Davis ran his finger over a tiny, insignificant nose, muttered, “Cute as a button,” then touched each of the twenty-two freckles sprinkled below his soft, pale cheekbones. The count completed, he dropped his hand to the steering wheel and stared into his own eyes.

“The eyes are the windows of the soul.”

He couldn’t remember who said that. Not his daddy, that was for sure. And not his ole ma, either. Maybe Miss Carson, his first grade teacher. Jackson-Davis had stayed with Miss Carson for three years before it became obvious that he was too slow to learn. Three years was a long time and Miss Carson must have said a lot of things.