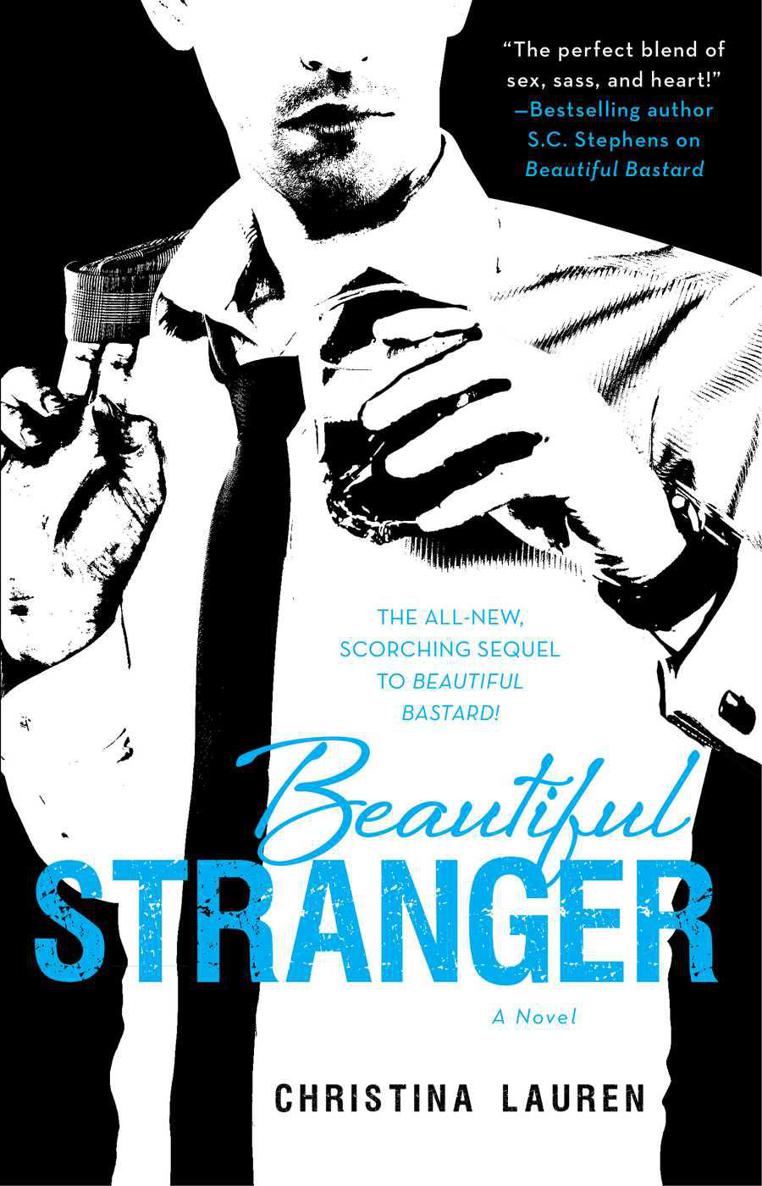 Praise for the story that began the sensation

And a whole lot of name calling.

—Tara Sue Me, author of
The Submissive

“
Beautiful Bastard
has heart, heat, and a healthy dose of snark. Romance readers who love a smart plot are in for an amazingly sexy treat!”

“
Beautiful Bastard
is the perfect mix of passionate romance and naughty eroticism. I couldn’t, and didn’t, put it down until I’d read every last word.”

About Christina and Lauren

When my old life died, it didn’t go quietly. It detonated.

But to be fair, I’d been the one to pull the pin. In just one week I rented out my house, sold my car, and left my philandering boyfriend. And though I’d promised my overprotective parents that I’d be careful, it wasn’t until I was actually at the airport that I called ahead to let my best friend know I was moving her way.

That’s when it all seemed to sink in, in one perfectly clear moment.

I was ready to start over.

“Chloe? It’s me,” I said, voice shaking as I looked around the terminal. “I’m coming to New York. I hope the job’s still mine.”

She screamed, dropped the phone, and reassured someone in the background that she was fine.

“Sara’s coming,” I heard her explain, and my heart squeezed just thinking about being there with them at the beginning of this new adventure. “She changed her mind, Bennett!”

I heard a sound of celebration, a clap, and he said something I couldn’t quite make out.

“He asked if Andy was coming with you.”

“No.” I paused to fight back the sick feeling creeping up into my throat. I’d been with Andy for six years and no matter how glad I was to be done with him, the dramatic turn in my life still felt surreal. “I left him.”

I heard her small, sharp inhale. “You okay?”

“Better than okay.” And I was. I don’t think I realized exactly
how
okay I was until that moment.

“I think it’s the best decision you ever made,” she told me and then paused, listening as Bennett spoke in the background. “Bennett says you’re going to shoot across the country like a comet.”

I bit my lip, holding back a grin. “Not too far off, actually. I’m at the airport.”

Chloe screeched some unintelligible sounds and then promised to pick me up at LaGuardia.

I smiled, hung up, and handed the counter attendant my ticket, thinking a comet was too directed, too driven. I was really more like an old star, out of fuel, my own gravity pulling me inward, crushing me. I ran out of energy for my too-perfect life, my too-predictable job, my loveless relationship—exhausted at only twenty-seven. Like a star, my life in Chicago collapsed under the force of its own weight, so I was
leaving. Massive stars leave behind black holes. Small stars leave behind white dwarfs. I was barely leaving behind a shadow. All of my light was coming with me.

I was ready to start over as a comet: refuel, reignite, and burn across the sky.

“You’re wearing the silver dress or I’m stabbing you,” Julia called from the kitchen zone, as I’d begun calling it. It certainly wasn’t big enough to be labeled a full-fledged kitchen.

I’d gone from an echoing, rambling Victorian in the Chicago suburbs to an adorable East Village apartment roughly the size of my former living room. It felt even smaller once I’d unpacked, put everything in its place, and had my two closest friends come over. The living room/dining room/kitchen area was framed by giant bay windows, but the effect was less palatial and more fishbowl. Julia was only visiting for the weekend, for this night of celebration, but she’d already asked me at least ten times why I’d chosen such a tiny place.

The truth was, I chose it because it was different from anything I’d ever known before. And because tiny apartments were pretty much what you were going to find in New York when you moved there without first securing a place to live.

In the bedroom, I tugged on the hem of the miniature, sequined dress and stared at the extreme amount of blindingly pale leg I was offering up tonight. I hated that my first instinct was to wonder if Andy would think it was too revealing, while my second instinct was to realize I loved it. I’d have to delete all of those old Andy programs, immediately.

“Give me one good reason why I shouldn’t wear this.”

“Can’t think of one.” Chloe walked into the bedroom wearing a deep blue number that flowed around her like some kind of aura. She looked, as usual, unbelievable. “We’re drinking and dancing, so showing some skin is requisite.”

“I don’t know how much skin I want to show,” I said. “I’m dedicated to my freshly minted single-girl card.”

“Well, some of the women there will be showing bare ass, so you won’t stand out if that’s what you’re worried about. Besides,” she said, pointing to the street below, “it’s too late to change. The limo’s here.”

“
You
should be showing bare ass. You’re the one who’s been naked-sunbathing and day-drunk in a French villa for the past three weeks,” I said.

Chloe gave a little secret smile and tugged my arm. “Let’s go, gorgeous. I’ve spent the past few weeks with the BB. I’m ready for a night out with the girls.”

We piled into the waiting car and Julia popped the champagne. With just one tingling, bubbling gulp, the entire world around me seemed to evaporate until we were just three young friends in a limo barreling down the street to celebrate a new life.

And this night we weren’t just celebrating my arrival: Chloe Mills was getting hitched, Julia was visiting, and the newly single Sara had some living to do.

The club was dark, deafening, and filled with writhing bodies: on the dance floor, in the halls, against the bar. A DJ spun music from a small stage, and flyers plastered all across the front promised that she was the newest and hottest DJ Chelsea had to offer.

Julia and Chloe seemed entirely in their element. I felt like I’d spent most of my childhood and adult life so far at quiet, formal events; here it was as if I’d stepped out of the pages of my quiet Chicago story and into the quintessential New York tale instead.

I shoved my way up to the bar—cheeks flushed, hair damp, and legs feeling like they hadn’t been properly used like this in years.

“Excuse me!” I shouted, trying to get the bartender’s attention. Though I had no idea what any of it actually meant, I’d already ordered slippery nipples, cement
mixers, and purple hooters. At this point, with the club at maximum density and the music so loud it shook my bones, he wouldn’t even look up at me. Admittedly, he was slammed and making such a small number of tedious shots was annoying. But I had an intoxicated, newly affianced friend burning a hole in the dance floor, and said girlfriend wanted more shots.

“Hey!” I called, slapping the bar.

“Sure is doing his best to ignore you, in’t he?”

I blinked up—and
up
—at the man pressed close to me at the crowded bar. He was roughly the size of a redwood, and nodded toward the bartender to indicate his meaning. “You never yell at a bartender, Petal. Especially not with what you’re going to order: Pete hates making girly drinks.”

Of course.
It would be just my luck to meet a gorgeous man just days after swearing off men forever. A man with a British accent to boot. The universe was a hilarious bitch.

“How do you know what I was going to order?” My grin grew wider, hopefully matching his, but most likely looking a lot tipsier. I was grateful for the drinks I’d already had, because sober Sara would give him monosyllables and an awkward nod and be done with it. “Maybe I was going to get a pint of Guinness. You never know.”

The Back Building by Julie Dewey
Steel by Richard Matheson
Russian Roulette (Russkaya Mafiya) by Sapphire Knight
Insignia by Kelly Matsuura
Egyptian Honeymoon by Elizabeth Ashton
Gone From Me by Channing, Kate
The Gradual by Christopher Priest
The Tumor: A Non-Legal Thriller by John Grisham
Appleby Talking by Michael Innes
Helix by Viola Grace