Read Absolute Trust in the Goodness of the Earth Online

Absolute Trust in the Goodness of the Earth 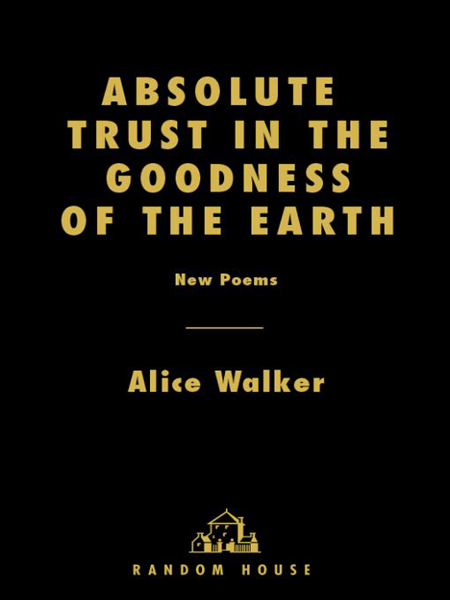 I Can Worship You

I Can Worship You

The Love of Bodies

Poem for Aneta Chapman on Her 33rd Birthday

The Same as Gold

Coming Back from Seeing Your People

Someone I Barely Know

How Different You Are

Trapdoors to the Cellar Spring-Grass Green

Even When I Walked Away - i

Inside My Rooms - iii

The Moment I Saw Her

A Native Person Looks up from the Plate

I Was So Puzzled by the Attacks

At First, It Is True, I Thought There Were Only Peaches & Wild Grapes

Reverend E. in Her Red Dress

All the People Who Work for Me & My Dog Too

All the People Who Work for Me & My Dog Too

The Snail Is My Power Animal

In Everything I Do

Until I Was Nearly Fifty

Thanks for the Garlic

Thanks for the Garlic

What Will Save Us

Thousands of Feet Below You

Living off of Isolated Women

To Be a Woman

To Be a Woman

The Last Time I Left Our House

I Loved You So Much

The Climate of the Southern Hemisphere

Where Is That Nail File? Where Are My Glasses? Have You Seen My Car Keys?

One of the Traps

Why War Is Never a Good Idea

Though We May Feel Alone

When We Let Spirit Lead Us

We Are All So Busy

Dreaming the New World in Careyes

Because Light Is Attracted to Dark

When Fidel Comes to Visit Me

When Fidel Comes to Visit Me

Someone Should Have Taught You This

My Mother Was So Wonderful

Some Things to Enjoy About Aging

Life Is Never Over

Bring Me the Heart of MarÃ­a Sabina

If They Come to Shoot You

You Too Can Look, Smell, Dress, Act This Way

The Breath of the Feminine

Bring Me the Heart of MarÃ­a Sabina

Para “El Chinito” Guillermo,
and to the blessed Feminine
in us all

Let's admit it. We women are building a motherland; each with her own plot of soil eked from a night of dreams, a day of work. We are spreading this soil in larger and larger circles, slowly, slowly. One day it will be a continuous land, a resurrected land come back from the dead.
Mundo de la madre,
psychic motherworld, coexisting and coequal with all other worlds. This world is being made from our lives, our cries, our laughter, our bones. It is a world worth making, a world worth living in, a world in which there is a prevailing and decent wild sanity.

Most of these poems were written at Casa Madre, our ochre red house, my daughter's and mine, on the central coast in Mexico. I had moved out of the large white room with veranda looking toward the Pacific and into what is usually a guest bedroom. Smaller, darker, quieter; less yang, far, far more yin. It was shortly after the attacks on the World Trade Towers and the Pentagon; I was feeling a deep sadness about the events and an incredible weariness that once again whatever questions had been raised were to be answered by war. Each morning, after sitting for half an hour, I wrote several poems. This was something of a surprise, since I had spent the past couple of years telling my friends I would probably not be writing anything more. What will you do instead? one of them asked. I would like to become a wandering inspiration, I replied. I had an image of myself showing up wherever people gathered to express their determination to have a future or to celebrate the present, speaking, reading, playing one of my very simple musical instruments, and just being around. I did not think I needed to offer much more than this. I still don't. It is the best that I have and the easiest to give. Still, obviously, life had more writing for me in mindâif poems can actually be called writing. I have now written and published six volumes of poetry since my first collection, written while I was a student and published in 1968. From that first volume to this, what remains the same is the sense that, unlike “writing,” poetry chooses when it will be expressed, how it will be expressed, and under what circumstances. Its requirements for existence remain mysterious. In its spontaneous, bare truthfulness, it bears a close relation to song and to prayer. I once told someone I could not have written my novel
The Temple of My Familiar
with straightened hair. I could not have written these poems in a bright sunny room where there were no shadows.

What many North Americans lost on September 11 is a self-centered innocence that had long grated on the nerves of the rest of the world. With time, more of this innocence will be shed, and this is not a bad thing. With compassion for our ignorance, we might still learn to feel our way among and through shockingly unfamiliar and unexpected shadows. To discover and endure a time of sorrow, yes, but also of determination to survive and thrive, of inspiration and of poems. The adventures one encounters will, of necessity, have a more risk-filled depth.

In my mid-fifties I devoted a year to the study of plant allies, seeking to understand their wisdom and to avail myself of the aid to insightful living that I believe the earth provides as surely as do meditation centers. I also wished to understand the ease with which so many in our Western culture become addicted: to drugs, to food, to sex, to thinness. What are we lacking that we so predictably can be sold all manner of harmful material in an effort to make up for it? I was particularly interested in discovering what our children are seeking when they turn to drugs and alcohol. Three times during the year I gathered in a circle with other women and a shaman and her assistant and drank
ayuascha,
a healing medicine used for thousands of years by the indigenous peoples of our hemisphere.
Ayuascha
is known as “the vine of the soul” and is considered holy. With this assessment I completely agree; I remain awed by my experiences. Several times I gathered with both women and men for the eating of mushrooms, called by the people who use them for healing “flesh of the gods.” For my final communication with the spirits of the plant world, at least in this form, I journeyed to the Amazon, home of “Grandmother” Ayuascha, where she herself instructed me I need look no further in her mirror; what she'd shown me already was enough.

As I see it, this is the work of the apprentice elder: to travel to those realms from which might come new (or ancient) visions of how humans might live peacefully and more lovingly upon the earth. I learned a lot, some of it fairly obvious. Our children take addictive drugs partly to allay their fears about what begins to look like a severely compromised future, one filled with hatred and with war. They take drugs to feel less lonely in a world that consistently chooses “profit” over community. But the most fundamental reason they take drugs, many of them, is the desire to have a religious or spiritual or ecstatic and trans-formative experience, a need hardwired into our being. Until relatively recentlyâthe last five hundred years or soâmost of our people had rituals during which they used all manner of inebriants to connect them with the divine. No one had invented a system to make money off of making others intoxicated. Nor were there laws forbidding the use of sacred plants used in healing and in ceremonyâlaws that, in the United States, have had a soul-killing effect on the native peoples whose connection to the infinite for thousands of years centered around the eating of mushrooms and particularly of peyote. I returned to my “ordinary” magical life much changed, and much the same, but deeply respectful of all our ancestors and their great inquisitiveness about, and belief in, the universe around them.

It was during these travels, internal ones and external ones, that I became aware of MarÃ­a Sabina, whose beloved face appears near the poem that invokes her name. Shaman, healer, priestess of the mushrooms, she was a legend in Mexico even while alive. Today she remains passionately revered, respected, loved, because she dedicated her life to the health and happiness of all humans. Whatever she is smoking will be used to cure whichever patient might be lying before her. She may receive a vision of what the illness is, or she may blow smoke over the sick person, purifying them and everything they touch. A poor Mazatec Indian from the mountains of Oaxaca, she has left a legacy of an amazing freedom, the foundation of which is absolute trust in the goodness of the earth; in its magic, in its love of us humans, in its ever present assistance the moment we give ourselves, unconditionally, into its wonder.