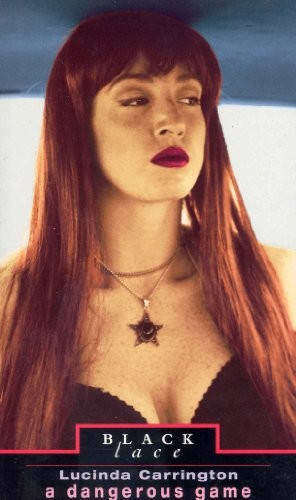 "I can handle Nicolas," said Jacey.

"That's what plenty of other women have said," Carmen warned her.

Maybe they have, Jacey thought.

But I have an advantage over them.

their case Nicolas Shiemann was using them.

In my case, I'm using

I'll use his knowledge, and his body.

And I'm going to enjoy every

Doctor Jacey Muldaire knows what she wants from the men in her life:

good sex and no strings.

And it looks like she's going to get plenty

of it while working in an elite private hospital in
South America
.

However, Jacey is not all she pretends to be.

A woman of many guises,

And her femme fatale

persona gives her access to places that other spies can't get to.

The men she's got her eye on, dictators and charismatic rebel

leaders, do not know that while playing along with their sexual

games, she's forcing them to play hers.

Every day is full of risk and

adventure, and everyone is playing a dangerous game.

By the best-selling author of The 90 Days of Genevive,

Black Lace is an imprint of Virgin Publishing Ltd.

Jacey surveyed her reflection in the mirror.

thought, amused at her image.

She knew this was exactly what Nicolas

In this game he wanted a woman who would do as she was told.

I'll act the part for him, she thought.

something Nicolas did not suspect.

She was playing games too with him.

But her game was no fantasy and in it she was the one in control.

By the same author:

THE NINETY DAYS OF GENEVIEVE.

In real life, make sure you

Work has been asserted by her in accordance with the Copyright, Designs

to real persons, living or dead, is purely coincidental.

This book is sold subject to the condition that it shall not, by way of

condition including this condition being imposed in the subsequent

Jacey Muldaire could see Anton lying on the bed, a sheet twisted

loosely round his knees.

His cock was limp now, but still an

It gave her a thrill of pleasure to look at him,

He was always sleepy after making love.

She sighed, knotted the sash of her black silk kimono, and switched on

eyes that could melt steel.

Most of the nurses were drooling over him,

envying anyone who was able to get close to him, and certainly envying

And I didn't even try to hook him, she remembered.

questioned me when we were doing the ward rounds, I probably wouldn't

have even noticed him.

Well, maybe that's not quite

I would have noticed him, but I wouldn't have

He did all the chasing.

And I did warn him.

him I wasn't into permanent relationships.

He didn't believe me then,

and he doesn't believe me now.

Neither does anyone else.

see why I don't grab him with both hands while I've got the chance.

The water boiled and the kettle switched off.

from the cupboard and glanced through the open door again.

shifted lazily, turning on his side, displaying his neatly rounded

He's attractive in bed, and out, she admitted to herself.

He always gives me an orgasm.

And if we run out of small talk we can

The nurses were probably taking bets on when she would

announce her engagement, and Anton's friends were deciding what kind of

embarrassing tricks to play on him on his stag night.

And Anton doesn't understand either.

He felt it was an insult to him.

"You can carry on working," he had often told her.

"I'm not suggesting you give up your career, for God's sake.

Beauty and brains; it's a very sexy

He often told her she was beautiful.

She glanced at him again.

eyes were closed and his breathing was steady.

He had been on duty

before coming to see her.

It seemed a shame to wake him when he was so

tired, just to give him a mug of coffee.

She left the mugs on the

table and walked over to her full-length mirror.

Well, I made it through university without too much trouble, she mused.

She had never considered herself beautiful.

deep burnished red of her hair, a colour you could never find from a

hair-dye, but although she knew she had good cheekbones, she thought

She had a dancer's legs, long and

slim, and a dancer's supple grace.

Her breasts were OK; not huge, but

She had never liked her bottom, and she thought her

hips were too narrow.

It was then that she heard a soft wolf-whistle

behind her and turned.

Anton was sitting up in bed.

"I thought you were asleep," she said.

"All good doctors sleep with one eye open," he said.

You know you're gorgeous."

She twisted to look over her shoulder.

"My bottom's too small, and it looks like a man's."

"No one's ever going to mistake you for a man."

"I played Romeo in a school play," she said.

"I was very convincing.

I got good reviews."

You wouldn't fool anyone now.

"Lie down and enjoy it."

She gave a theatrical gasp of surprise.

Your powers of recovery are remarkable, sir."

"With you to inspire me I could be a six-times-a-night man."

glanced down at his now semi-erect cock.

Just thinking about you is making me hard.

Come and use that

lovely mouth on me and inspire me a little bit more."

She shook her head and backed away.

stretched out on the bed again, his eyes closed.

She smiled and went

into the living room, where most of Anton's clothes were scattered.

She picked up his denims and tugged them on, surprised to find that

they were quite a good fit.

His soft, leather bomber jacket was too

large but it disguised her breasts.

She dragged her hair back as

severely as she could and pushed the pony tail under the jacket collar.

when it was raining.

She pulled it on, walked back into the bed room

She saw the bemused expression on his face as he opened his eyes.

was momentary but it satisfied her.

She pirouetted in front of him.

"And I wasn't really trying.

Think how much better I'd look in a man's

"I've seen pictures of Marlene Dietrich in a suit.

Jacey struck a camp pose, one hand on her hip.

He caught her wrist and pulled her down on the bed.

"I'll have to inspect what you're offering."

He deftly unzipped the

panties, and that she was wet and aroused.

His fingers explored her.

"Something seems to be missing here."

"There's nothing missing," she teased back.

It's just a question of size."

He captured her clitoris and tugged it gently.

"You mean you think you can satisfy me with this?"

She leant back on the bed and opened the leather bomber jacket.

The Peacemaker by Chelley Kitzmiller
The Invention of Wings by Sue Monk Kidd
True Names and the Opening of the Cyberspace Frontier by Vernor Vinge
Don’t You Forget About Me by Alexandra Potter
The Lost Colony by Eoin Colfer
Mojitos with Merry Men by Marianne Mancusi
The Alexandru Chronicles: The Beginning by Julienne Holmes
Aurora Rising: The Complete Collection by G. S. Jennsen
The Manny Files book1 by Christian Burch
Charming by Krystal Wade